What history can teach us about the resilience of a system

In a study published in Regional Environmental Change, researchers analyse how the wetland system found in Xochimilco in the southern periphery of Mexico City, a system of shallow canals and small islands constructed by humans, has adapted to three critical passages in history. Photo: M. Schewenius.

Despite rapid urban growth, agriculture in a wetland area in the south of Mexico City soldiers on, more than a millennium after its birth

STILL STANDING: How do you maintain the resilience of an aquatic-terrestrial agricultural system more than 1000 years old? The chinampa system, an agricultural wetland system found in Xochimilco in the southern periphery of Mexico City, could hold the answer.

In a study published in Regional Environmental Change, centre PhD student Maria Schewenius and colleagues from Universidad Nacional Autónoma de México analyse how the system of shallow canals and small islands constructed by humans has adapted to three critical passages in history.

Based on this analysis, they are able to reflect on what the future holds for this unique agricultural system.

Although resilient, the current remnant of the Xochimilco wetland has an unknown future trajectory. But our historical evaluation can be a useful approach in the planning of future interventions.

Challenged since the 1300s

The first stage is the pre-Hispanic and early colonial period between late 1300s-early 1700s. During this period, which coincided with the peak of the Aztec Empire, the chinampas evolved into a highly productive and sustainable system which extended through the city of Tenochtitlán, the capital of the Aztec Empire.

When Spanish conquerors invaded Tenochtitlaán in 1521 and began establishing what is today’s Mexico City, they severely drained the lakes in the region. This forced chinampa farmers to concentrate their work to the few remaining lakes that were left, today constituting the Xochimilco area.

A risk of collapse had been narrowly avoided.

The second stage covers the next 250 years of history, until the 1950s. Although the chinampa system had been reduced in size, the agricultural production continued during the Spanish rule but faced increasing challenges after the Mexican independence in 1821.

Government reforms complicated the production at the chinampas while the thirst for water from the growing Mexico City pushed the system to the brink.

Towards the early half of the 1900s, the system virtually collapsed.

The third stage covers the period of the 1950s until 2010. Attempts were made to compensate for the damage by pumping in semi-treated wastewater in the canals but the low quality of the water only just allowed the agriculture to survive. Meanwhile, Mexico City’s staggering growth during the 1960s eventually reached Xochimilco. Wetland areas turned into paved roads and built-up land while traditional, organic farming faced increasing competition.

The 8.1 earthquake that devastated Mexico City and its surroundings in 1985 caused further damage to the area but it also sparked efforts to save Xochimilco’s wetlands and the chinampa production. In 1987, the remnants of the chinampa area in Xochimilco were declared a UNESCO World Heritage Site. 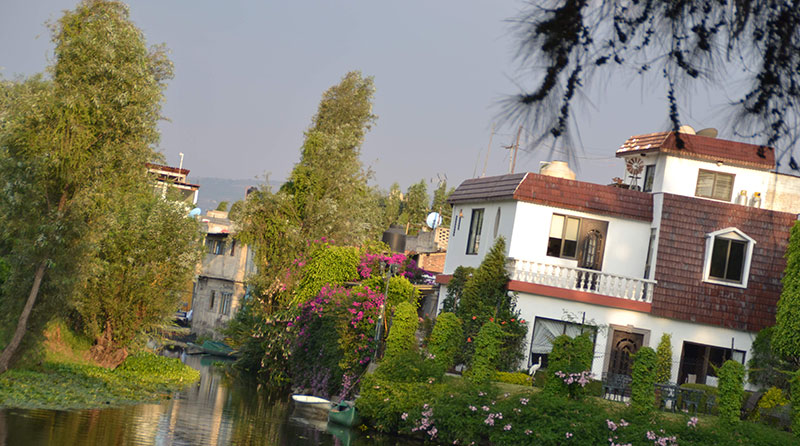 Why it has survived

Why the system is still working is down to four reasons, according to Schewenius:

1. A continued market interest in chinampa products
2. A low-maintenance system which makes it possible to keep farming despite various financial, political and environmental challenges
3. Chinampa comes with a high cultural and social value which generates a strong interest in maintaining the system
4. The system ultimately involves a wide variety of interests which in turn leads different actors and institutions to show an interest in its survivial

"Although resilient, the current remnant of the Xochimilco wetland has an unknown future trajectory. But our historical evaluation can be a useful approach in the planning of future interventions," Schewenius concludes.

Maria Schewenius is a PhD candidate focusing on identifying ways to use Extended Reality technologies and Artificial Intelligence as part of planning and design for urban sustainability.