Biting the hand that feeds them

Once close allies, cities and agriculture are now in fierce competition for land

• Global productive croplands is rapidly being lost to urban encroachment

• Such urban land use change can lead to weather changes occurring in widely separated regions of the globe, deforestation and Global South food insecurity

Historically, cities and proximate landscapes of food production co-evolved out of need for each other. Today, urbanization is crowdig out food production as cities sprawl over peri-urban farmlands.

To host billions of new urban dwellers globally, city borders are expanding rapidly while modern urban lifestyle of mass consumption fuels competing demands for land in distant places. Can the former allies once again be united by making food production an integral part of cities?

In a study published in the Anthropocene Review, centre researcher Stephan Barthel and colleagues look at the promises of Urban and peri-urban Agriculture (UPA).

By 2030, two percent of the global stock of fertile soil will have been consumed by urban expansion, mostly in the Global South. The farmland being lost is almost twice as fertile as the global average and production levels are dropping by the same token. In Egypt, for example, food production is expected to decrease with up to 38 percent

Contemporary strategies to combat this development are increased intensification, conversion of uncultivated land into farmland, and increased dependency on food imports.

Most of the suitable farmland is already in use and it is mainly forested areas that are converted to cropland. Being less fertile, much larger acreages are needed to produce the same amount of food. Put differently, this strategy drives deforestation and causes subsequent damage to biodiversity, carbon sequestration, and other crucial earth system processes.

The case of trade

Between 1960 and 2005, global food imports quadrupled. Food trade is important to build local food security but is a risky stand-alone strategy for urban poor as prices and trade flows fluctuate. In addition, the current liberalized food trade regime is based on unfair terms biased towards wealthy nations and large corporations.

Countries in the Global South tend to specialize in exporting monoculture, high-input cash crops to the expense of local food supply and land health. Meanwhile, economically powerful countries are increasingly employing land-grabbing: purchasing farmland in lower income countries for direct import to the own market.

Corporate entities of the Global North also exercise control over the global food supply chain as they largely dominate production processes from farm to fork.

Urban encroachment of farmland happens on a local level but with global consequences. The authors therefore call for urban cropland to be considered a global resource that is managed locally. They advocate for the establishment of an advisory global governance structure that guides urban planning. The key is to make urban soil health a global priority while allowing for place specific strategies; global urban communities and soil systems are inherently diverse.

The one-size-fits all garden gloves never really fit anyone and this is where UPA comes in. “UPAs may play a key role in aligning advisory global land-use policy and local management”, explains Barthel.

UPA is comprised of many different food producing activities ranging from home gardens to livestock keeping. These actors possess invaluable local knowledge that can be used to restore soil health through creating food systems that are self-reliant, re-localized, and de-standardized. 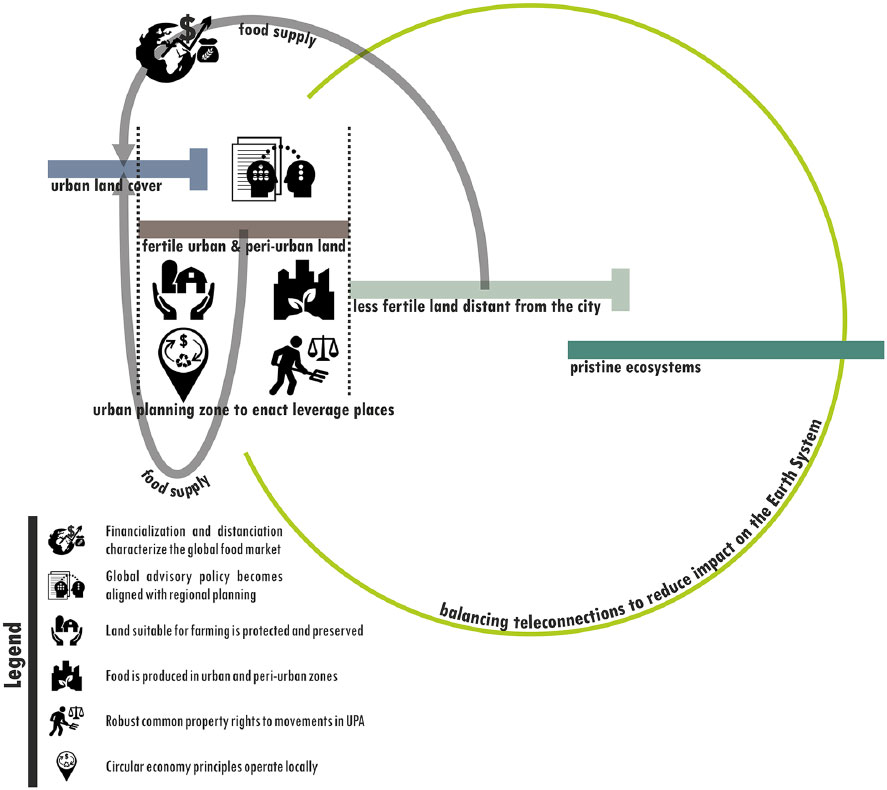 Supporting evidence from the past and the present

There are plenty of historical and contemporary examples of urban agricultural systems contributing to food security. Food production was a key feature in the cities of the Aztecs and Cuba’s urban food system model mitigated food shortages during the US’ trade embargo.

Today, UPA systems have been found to foster a local sense of responsibility and agency for soil management and protection. Important, as strong public institutions are often missing in the Global South where most of the urban farmland loss will happen.

Barthel and his colleagues conclude: “Future research needs to assess in further detail if our proposal is efficient to resolve the city-agriculture competition for land”.

Given that urbanization is predicted to continue and city dwellers expected to keep on getting hungry, they seem to be on to something.

The study is based on a literature review drawing on the concepts of economic globalization, open access and global governance, urban agriculture, and urban resilience. The goal was to identify the challenges related to the competition for land between food production and urban sprawl and to discuss possible strategies going forward. The article identifies 1) the drivers and consequences of cities crowding out food production, 2) possibilities and challenges of managing urban soil as a global common resource, and 3) suggests a mixed level strategy where global land-use policy is combined with regional planning and local management.