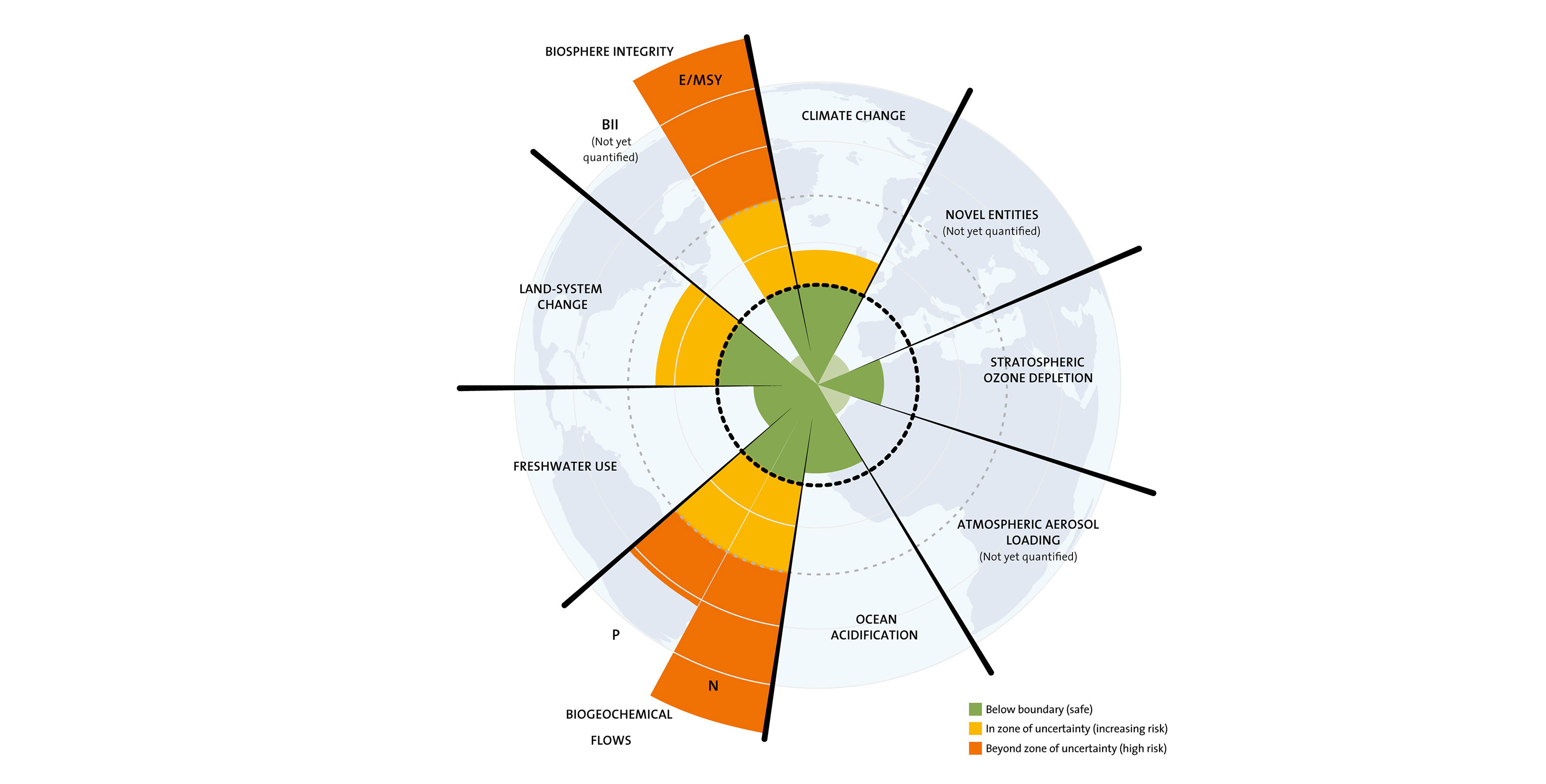 In 2009, former centre director Johan Rockström led a group of 28 internationally renowned scientists to identify the nine processes that regulate the stability and resilience of the Earth system. The scientists proposed quantitative planetary boundaries within which humanity can continue to develop and thrive for generations to come. Crossing these boundaries increases the risk of generating large-scale abrupt or irreversible environmental changes. Since then the planetary boundaries framework has generated enormous interest within science, policy, and practice.

Nature: a special section and feature article published in Nature

Most recent update of the framework, published in Science. It stated that society’s activities have pushed climate change, biodiversity loss, shifts in nutrient cycles (nitrogen and phosphorus), and land use beyond the boundaries into unprecedented territory.

From 2017, Johan Rockström’s ERC Advanced Grant Earth Resilience in the Anthropocene is funding an exciting new phase in this work. Centre researchers including Sarah Cornell, Tiina Häyhä, Ingo Fetzer, Steve Lade, Andrea Downing, Jonathan Donges, and Avit Bhowmik have all been actively involved in advancing these frontier areas, and building collaborative research links among a growing international community of scientists.

Former UN Secretary-General Ban Ki-moon urged global society to “Help us defend the science that shows we are destabilising our climate and stretching planetary boundaries to a perilous degree.”

Centre researchers kept planetary boundaries in the forefront of policy-advisory processes leading up to the agreement of the global Sustainable Development Goals. Policy-makers working at national and European levels are also interested, catalysing a research network, PB-net.org, which links scientists involved in translating the global framework to operational decision-making scales.

A report to the Swedish Environmental Protection Agency

(pdf, 901.8 kB) assessed Sweden’s responsibility, and a 2016 study for the European Environment Agency assessed the contribution to global boundaries both of activities within Europe’s territory and of effects of its citizens’ consumption. Increasingly, companies are asking for guidance on putting the planetary boundaries into business practice.

The World Business Council on Sustainable Development, a forum for 200 companies including some of the best-known brands in the world, used the planetary boundaries framework to shape their Action 2020 strategy. Since then, there has been further engagement with companies in financial investment, food, textiles, building, technology, and household goods sectors.

Stockholm Resilience Centre became the scientific partner in a research project with the Ellen MacArthur Foundation and the Swedish clothing retailer H&M group, working to integrate the planetary boundaries framework and the circular economy concept.

The illustrations are free to use in publications, scientific or otherwise, describing the planetary boundaries concept. Correct credit is required.

Life cycle assessment (LCA) can be used to translate the planetary boundaries (PBs) concept to the scale of decisions related to products. Existing PB-LCA methods convert quantified resource use and emissions to changes in the values of PB control variables. However, the control variable for the Land-system change PB, “area of forested land remaining”, is not suitable for use in LCA, since it is expressed at the beginning of a...

Background : The Planetary Boundaries concept (PBc) has emerged as a key global sustainability concept in international sustainable development arenas. Initially presented as an agenda for global sustainability research, it now shows potential for sustainability governance. We use the fact that it is widely cited in scientific literature (>3500 citations) and an extensively studied concept to analyse how it has been used and...

Trajectories of the Earth System in the Anthropocene

We explore the risk that self-reinforcing feedbacks could push the Earth System toward a planetary threshold that, if crossed, could prevent stabilization of the climate at intermediate temperature rises and cause continued warming on a “Hothouse Earth” pathway even as human emissions are reduced. Crossing the threshold would lead to a much higher global average temperature than any interglacial in the past 1.2 million years a...

A thought experiment on sustainable management of the Earth system

We introduce and analyze a simple formal thought experiment designed to reflect a qualitative decision dilemma humanity might currently face in view of anthropogenic climate change. In this exercise, each generation can choose between two options, either setting humanity on a pathway to certain high wellbeing after one generation of suffering, or leaving the next generation in the same state as the current one with the same op...

See all publications by Planetary boundaries