Centre researchers Steve Lade and Jamila Haider explain their study on how to extend poverty-trap thinking to more fully include the links between financial well-being, nature and culture.

Breaking the cycle of poverty

Development aid must incorporate culture and nature better in efforts to push communities out of poverty, researchers argue

Development aid reached a new peak of 142.6 billion USD, according to recent data from the OECD. In a study recently published in the journal Science Advances centre researchers Steven Lade, Jamila Haider and Maja Schlüter together with Gustav Engström from partnering institution Beijer Institute for Ecological Economics call into question a cornerstone of development aid: the “poverty trap” and its “Big Push” solution.

This is when aid agencies inject cash for seeds, fertilisers and machinery, for example, into rural economies caught in a vicious cycle of underdevelopment. In theory, this will push these economies “over the barrier” to become better functioning economies.

But for decades a regular criticism leveled at this singular approach is that it can lead to ever-more persistent poverty in some places because culture and nature are ignored.

For the first time, we provide a way to extend poverty-trap thinking to more fully include the links between financial well-being, nature and culture

This new approach makes it difficult for development agencies to ignore a broader range of options and solutions. It could also inform the better integration of the UN’s Sustainable Development Goals.

With 78% of the world’s poorest people living in rural areas, development aid is often targeted at quick-fix financial and technological farming solutions. The “Big Push” – one of the earliest theories of development economics – is still a popular one-size-fits-all approach, despite its known limitations. Development agencies often encourage farmers to grow single cash crops, or monocultures, such as GM cotton in India, that they can sell to rise out of poverty – with mixed results.

While successful in many places, it can lead to deforestation, or nitrogen and phosphorus pollution to name a few environmental consequences. In some instances, it has created a cycle of poverty where “improved” seed varieties fail due to neglect of local environmental conditions and culture, leaving the land in a worse condition than before, and losing valuable knowledge – reinforcing the poverty trap.

The team’s new approach classifies three types of solutions to alleviate poverty. The first is the standard Big Push “over the barrier”. The second is to “lower the barrier”, which could include training of farmers to change behavior and practices. These two classifications form the backbone of current aid strategies. The researchers introduce a third classification they call “transform the system”.

The classification is about fundamentally rethinking the intervention strategy. For example, encouraging a farmer to devote a portion of his or her intensively-farmed land to local crops maintained through traditional practice to maintain resilient seed varieties.

Haider says, “If poverty in an area is causing environmental degradation then maybe a big push will work. But if the land has been managed sustainably for generations then development agencies need an approach that takes that knowledge into consideration.”

This seems obvious, but intervention strategies can become blinded by powerful yet simplistic economic models, she explains. Some communities have remained resilient for generations through, for example, using many traditional seed varieties. In their study, the researchers show how development interventions need to vary based on different relationships between poverty and environment. 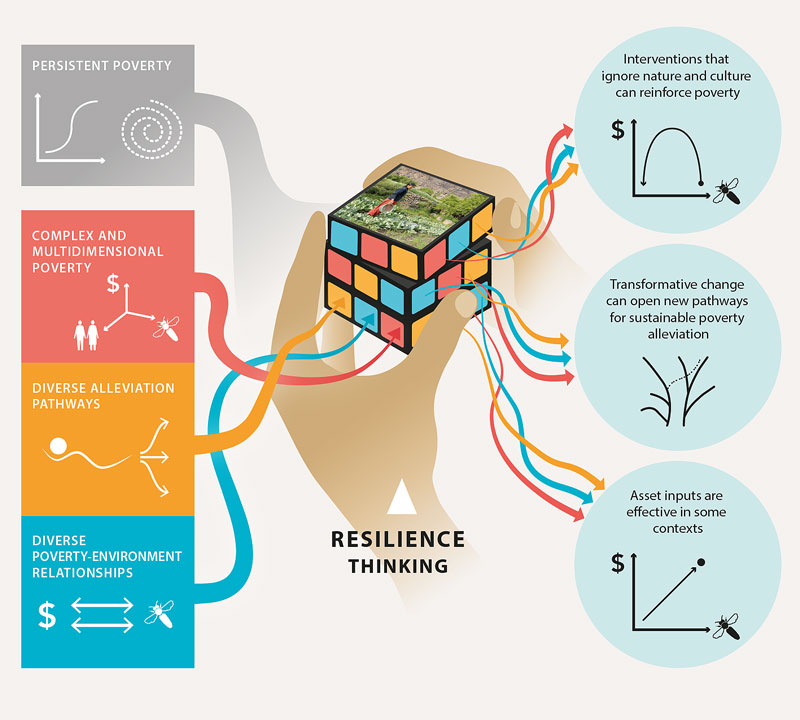 The models in the study could be used in development planning to make explicit the available knowledge and assumptions of different cases.

Rather than increasing production through inputs of physical capital, the transformation delivers increased production due to increases in natural capital and cultural capital.

"This is an alternative approach to analyse investments for intervention. Where risks are high that traditional aid will fail, it gives options to explore and implement alternative strategies that focus on transformation built on historically successful cultural practices to manage the local ecology," Steve Lade concludes.

Jamila Haider is a PhD candidate studying the relationship between persistent poverty and biocultural diversity. Her PhD explores how development interventions can improve human well-being without eroding the cultural and agricultural bio-diversity that makes a given place unique and is important for global resilience.

Maja Schlüter’s research focusses on analysing and explaining the co-evolutionary dynamics of social-ecological system with the aim to develop Social-Ecological Systems theory. On the methodological side, she works on advancing social-ecological modeling at local and global scales that incorporates human adaptive behavior