Jamila Haider explains her research on how development interventions can improve human well-being in food systems without eroding cultural and biological diversity.

For Jamila Haider, PhD student at the centre, life took a turn over a shared bowl of apricot soup in the Pamir Mountains of Tajikistan.

”At the time I had been living in the Pamirs for over a year, but had never had a single local or traditional food which was confusing since there is so much agricultural biodiversity,” she tells me. She is in the six-month sprint to defending her thesis, and in closing this chapter she thinks back to how it started with warmth and fondness.

”I was working as a development practitioner on community natural resource management and cross-border relations between Tajikistan and Afghanistan. During this time I met Frederik van Oudenhoven, and over a bowl of traditional apricot soup, he told me that some of the scientists from the Pamir Biological Institute and Khorog State University had started to collect traditional local recipes. Nothing much more came of it at the time.”

But, to use what seems an appropriate metaphor, a seed of an idea was planted and the apricot soup turned out to have been food for thought in a big way. 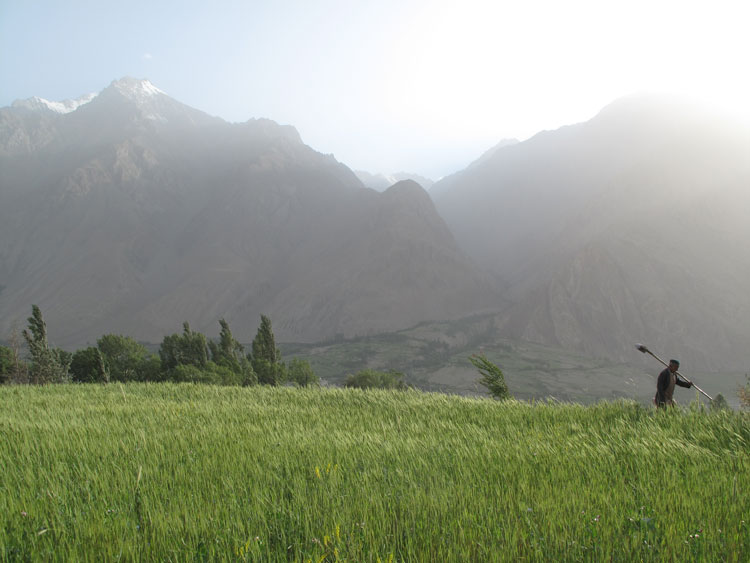 Jamila moved to Kabul to coordinate natural resource management programmes. She found that most of the programmes for agricultural development involved improved seed varieties. The overall aim was to increase productivity of crops and also increase their marketability.

”I wondered why more wasn’t being done to preserve the traditional varieties that have co-evolved in these mountain landscapes over millennia. And more importantly, I couldn’t see how producing more ‘marketable’ crops made sense in a place with limited market access to begin with, at least in the short term. I was sad about the lack of recognition, both within and from the outside, of the richness of Pamiri biological and cultural diversity. So I wrote to Frederik, and asked him if he still wanted to work on this recipe book.”

With a donation of a few thousand dollars from a small foundation, they set off to the Pamirs again to collect recipes and stories. Conversations about recipes soon became conversations about age-old traditions and the rapid social and ecological changes that are now happening in the region. The result of the work became “With Our Own Hands: A celebration of food and life in the Pamir Mountains of Afghanistan and Tajikistan”.

The book is written in three languages in parallel – English as well as Dari and Tajik, the forms of Persian spoken in Afghanistan and Tajikistan respectively. In fact, it is the first book written about Pamiri culture in languages accessible to the people living there.

In May 2016 the book was awarded “Cookbook of the Year” by the Gourmand World Cookbook Awards, the most prestigious and largest award in the culinary calendar. But for Jamila and Frederik writing the book was never about international recognition. In fact, the book was never meant for the outside world. “We wrote it for the Pamiri people,” Haider says. In October 2015 they returned to distribute 1700 copies to the villages in the region.

Alongside the book, Jamila started her PhD studies at the centre and her research journey started. For the past four years Jamila has looked at effects of poverty alleviation strategies on biological and cultural diversity , and the potential for adaptive or transformative responses from local knowledge systems.

”I’m interested in the process of development – specifically how development interventions can improve human well-being in food systems without eroding cultural and biological diversity,” she explains.

”Especially, I am fascinated with the relationship between agricultural biodiversity and culture, and how they have co–evolved, creating beautiful landscapes over millennia. At the same time as I learnt about the rich agricultural diversity of the Pamirs I also became aware of the incredible ingenuity and knowledge that created this diversity and these landscapes. It is through this kind of human ingenuity, inspired by the landscape, that the Pamirs became a centre of origin of many grains, fruits and nuts. To separate food and culture, ecology and society, would be divide life itself into incomprehensible units.” 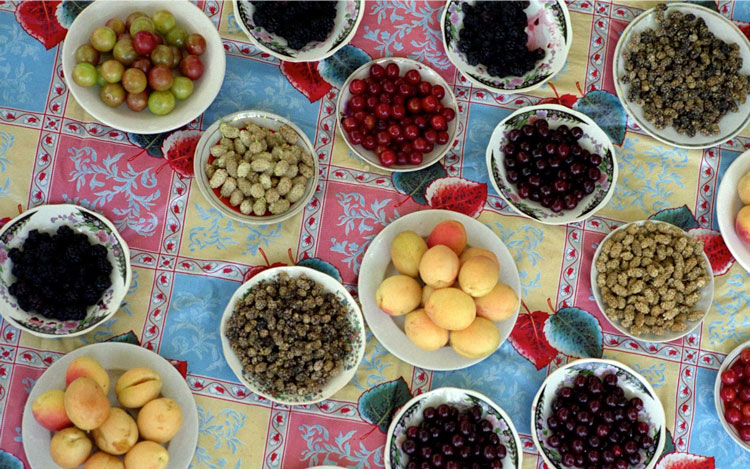 The Pamirs are home to a rich variety of grains, fruits and nuts that are now cultivated and consumed around the world. Photo: J. Haider

In her research she has continued to draw on experiences from gathering recipes. Jamila realised that collecting the stories around food was a very powerful way in particular to hear the voices and visions of women.

”While working on the book we found that food as an object brings culture, language, ecology, spirituality, health and all aspects of life into a whole,” she says.

”The Pamirs are a region of heavy international development focus: there are programmes for health, for natural resource management, for enterprise development, for conservation, for tourism … the list goes on. Innovative proposals demonstrate how these different sectors can be ‘coupled.’ The same is true for science – we break whole things apart in order to analyse them and then attempt to stitch them back together in the name of inter-, or transdisciplinarity. Food, inherently involves all of these things, and provides an evocative, emotive and inclusive way to talk about life.”

Jamila started her PhD with a varied background. She had degrees in biology, political science, geography, and a few years of international development experience as well as the anthropological study of the book. In her PhD she makes a case for conceptual and methodological pluralism in pursuing her research questions, from collaborating on a theoretical systems model of poverty traps to ethnographic methods.

“I realised that many of my colleagues at the centre had similarly diverse backgrounds. Our PhDs are mostly extremely interdisciplinary and it can be hard to identify what your contribution to science is,” she says. “Colleagues and I have written a paper about this, in which we describe the journey of early-career sustainability researchers, searching to balance breadth and depth in theory and methods. Striking that balance and finding our space in research has at times been very challenging, but also quite fun. I feel lucky to have so many wonderful colleagues to work though this with.”

And the different methods and many theories all have their place in the research questions Jamila has set out to answer.

“Ultimately what motivates me is the idea that more just, sustainable and appropriate pathways of development exist that we have not yet imagined; that novel ideas and solutions emerge from relationships between landscape and culture. I’m motivated by the idea that there is a way to do development differently, and that this kind of research makes space for that.” 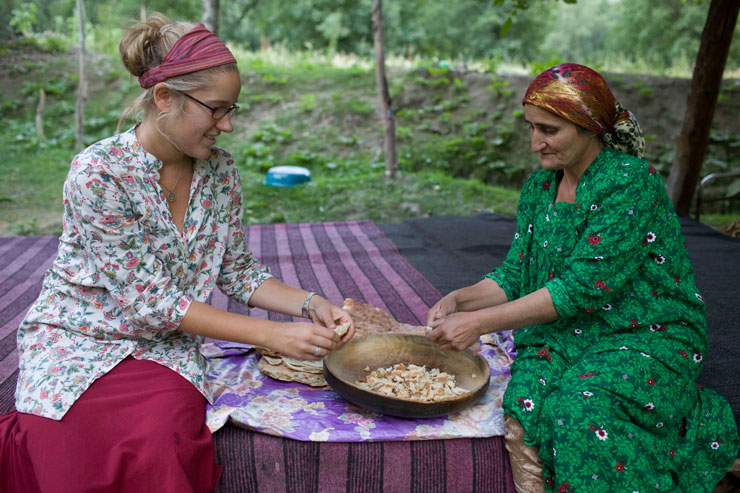 Gathering recipes and stories around food became a very powerful way in particular to hear the voices and visions of women. Photo: T. Kaye

Jamila Haider is a PhD candidate studying the relationship between persistent poverty and biocultural diversity. Her PhD explores how development interventions can improve human well-being without eroding the cultural and agricultural bio-diversity that makes a given place unique and is important for global resilience.