Of the over 400 climate scenarios assessed in the 1.5°C report by the Intergovernmental Panel on Climate Change, only around 50 scenarios avoid significantly overshooting 1.5°C. Of those only around 20 make realistic assumptions on mitigation options, the new study shows. Photo: K. Moum/Unsplash

New study identifies the 20 most feasible scenarios that avoid significant overshoot of a 1.5°C target

PULLING LEVERS: There are many published scenarios of greenhouse gas emissions that stabilize global average temperature at 1.5°C, in computers at least.

But which of these scenarios are realistic and which ones might be pie in the sky?

Of the over 400 climate scenarios assessed in the 1.5°C report by the Intergovernmental Panel on Climate Change (IPCC), only around 50 scenarios avoid significantly overshooting 1.5°C.

Of those only around 20 make realistic assumptions on mitigation options, for instance the rate and scale of carbon removal from the atmosphere or extent of tree planting, the new study shows.

All 20 scenarios need to pull at least one mitigation lever at "challenging" rather than "reasonable" levels, according to the analysis.

The realistic window for meeting the 1.5°C target is very rapidly closing.

The researchers looked at five levers that will be key to driving down emissions:

They categorized the representation of these solutions in the scenarios as “reasonable”, “challenging” or “speculative”.

All scenarios that we find to be realistic pull at least several levers at challenging levels.

From emitters to stores of carbon

Co-author, Owen Gaffney from the Stockholm Resilience Centre says, “The scenarios that succeed in stabilizing temperatures at around 1.5°C have similar characteristics. By 2030, these scenarios have approximately halved carbon dioxide emissions and flipped farming and other land use, for example forestry, from being major emitters of carbon to starting to store carbon on aggregate.”

Those scenarios classified by the analysis as unrealistically optimistic most frequently tend to over-estimate carbon capture and storage potentials, while others over-estimate energy consumption or reduction of non-CO2 greenhouse gases like methane.

Still others make all too bold assumptions about dietary changes towards more plant-based food or about limited population growth.

Beware of pies in the sky

The authors also took a closer look at the scenarios provided by the International Energy Agency (IEA) in 2018 and the so-called ‘Sky’ scenario produced by the Shell oil and gas company. Both scenarios foresee net emissions falling to zero globally as late as 2070.

The researchers found that they do not lie within the corridor of carbon dioxide emissions over the next century that seems to offer a realistic chance of meeting the 1.5°C target. The Shell Sky scenario shows emissions levels in 2030 well above other scenarios considered in this study (see illustration below).

“The Shell Sky scenario has been called a pie in the sky, and that’s indeed what it is,” says co-author Gail Whiteman from the University of Exeter’s Business School.

“In the business community some still like it because it seems to offer, in comparison to other scenarios, a relatively easy way out of the climate crisis. Our analysis shows, however, that there are no easy ways out.”

“The necessary emissions reductions are hard to achieve, technically but also politically. Yet I think limiting warming at 1.5°C is worth just every effort because this would limit the risk of giving some tipping elements in the Earth system an additional push, such as ice sheets or ecosystems like the Amazon rainforest. As technical as this all might sound, it really is about assuring a safe climate future for all,” concludes co-author Johan Rockström from the Potsdam Institute for Climate Impact Research. 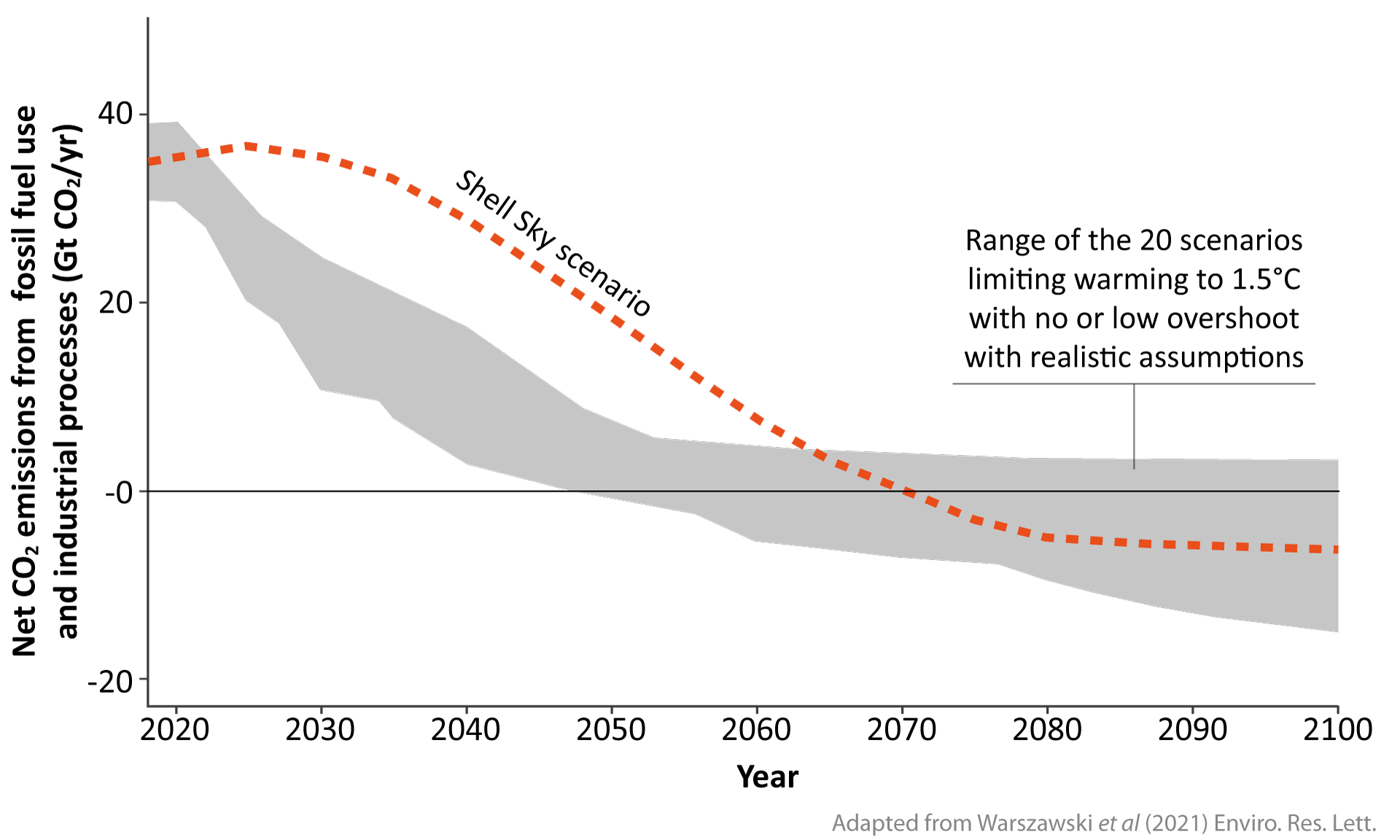