In a study published in Landscape and Urban Planning, researchers show how forced racial segregation during Apartheid has influenced the distribution of and access to green infrastructure. J. Miller/Unequal Scenes

GREEN APARTHEID: South Africa is a compelling country for many reasons. One is how wealth and race go hand in hand.

The legacy of Apartheid and segregation have created glaring divides between those who have (White minority) and those who don’t (Black African, Indian and Coloured majority). Black South Africans, who make up 86% of the population, continue to suffer lower levels of education and incomes than their White counterparts, despite increase in household income.

This inequality extends to all parts of life, including access to urban green areas.

In a study published in Landscape and Urban Planning, centre researcher Vanessa Masterson parts of a team with colleagues from Norway and South Africa, show how forced racial segregation during Apartheid have influenced the distribution of and access to green infrastructure.

A luxury for the wealthiest

By using open-source satellite imagery and geographic information, along with national census statistics, they found that areas with White residents not only enjoy a 6-fold higher income but also live closer to greener areas and parks.

Almost all measures of green infrastructure, including park areas and tree cover, were unequally distributed across race and income. White citizens live on average 700 metres from a park whereas Black African citizens live 2,6 km away. These spatial inequalities are mirrored in both public and private green space. 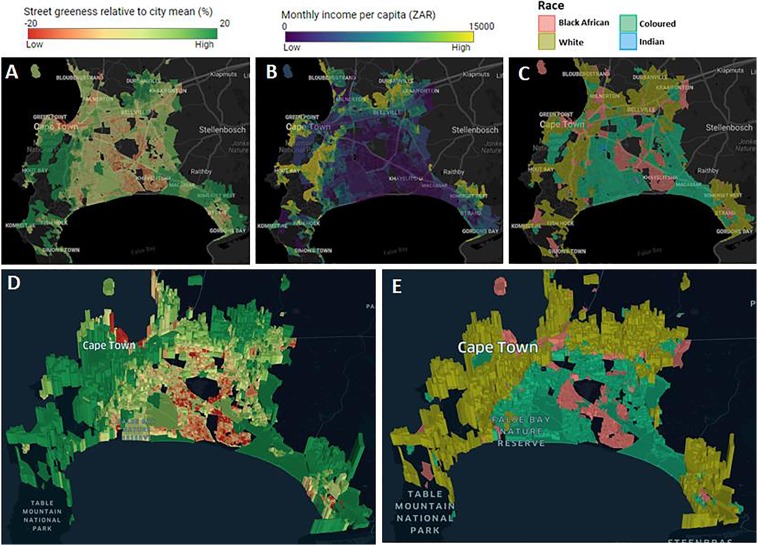 Maps of census tracts in the City of Cape Town district municipality. Census tracts are coloured by relative street greenness (A, D), income (B) and race (C, E). The height of census tracts in D and E represents income. Empty space within the city represents non-residential areas that were not accounted for in the 2011 census. Click on image to access scientific study

Living in close proximity to public parks and in greener neighbourhoods appears to be a luxury afforded to wealthier citizens.

Green space inequity has gotten worse for Black citizens since Apartheid. This is important because many studies show that green space provides critical benefits to people’s wellbeing.

While legislation in South Africa seeks to address these divides, lack of finance and poor cooperation and the view that green spaces are an optional luxury mean that greening programmes have not materialised.

However, the use of open access satellite and census data to show these inequalities provides scope for social advocates to hold governments accountable.

“Any instruments of economic development and redistributive justice would do well to include urban greening agendas to dismantle the racial, economic and green Apartheid in South Africa,” the authors conclude.

For more information about the study, please contact Vanessa Masterson: