A new study examines the social-ecological crisis of the coffee leaf rust outbreak in the Chiapas Sierra Madre, Mexico. The authors analyze institutions as well as how time, geographical, and power scales have played out in the crisis. Photo: A. Libert Amico

There’s a whole social-ecological crisis behind your morning cup of joe. A new study examines how geographical, time, and legal and institutional scale (mis)matches interplay with the coffee leaf rust outbreak that is affecting small-scale Arabica coffee producers

• Authors use small-scale coffee agroforestry in the Chiapas Sierra Madre, Mexico, a biodiversity hotspot which has been producing gourmet coffee for almost two centuries

Coffee is a standard part of many people’s morning. Even though coffee is something that many people think about every single day, what most might not think about is how their cup of coffee came to be. In such a globalized world, it is easy to be blind how the bean becomes a full cup, and anything that might be affecting that process along the way.

Take the popular Arabica coffee, or Coffea arabica L., for instance. For some time now, the bean has been fighting an unrelenting fungus, Hemileia vastatrix, which causes the disease known as the coffee leaf rust. Arabica coffee, sought after for its less acidic and more balanced taste, has been impacted all over Central America and Mexico. Between 2012-2015 alone, 10-55% of its production was lost in the region. This decrease in production has particularly impacted the smallholder farmers that produce organic fair-trade coffee, as well as its surrounding ecosystem.

To better understand this social-ecological crisis, centre researchers Claudia Iturate-Lima and Thomas Elmqvist co-authored a paper with Antoine Libert-Amico from Universidad Autónoma Metropolitana (Mexico), to examine the coffee leaf rust epidemic from a social-ecological and legal perspective. The authors analyse dynamics at various geographical and jurisdictional scales and how they affect coffee agroforestry in Chiapas Sierra Madre, Mexico.

We explore how the current coffee leaf rust epidemic is an expression of global environmental change, with implications for legal frameworks and international efforts towards risk management and climate change adaptation.

By addressing debates on legal resilience building, the researchers illustrate how mismatches between social–ecological changes and legal and institutional arrangements may hit small-scale coffee producers and the ecosystems they depend on and also affect rich biodiversity with global values.

First, the authors draw on the geographical concept of modularity to understand the coffee leaf rust social-ecological crisis. Modularity demonstrates how well an area is spatially connected. An area with low modularity is highly connected, such as a green belt connecting multiple green spaces. This makes a space more susceptible to a disaster or disease. Contritely, an area with high modularity is segregated, but less vulnerable to disease.

Previous work has linked intermediate modularity to general resilience of a system. “The concept is useful as a background to explain the type and range of legal institutions needed to consolidate resilient agroforestry systems that support local livelihoods,” says co-author Ituarte-Lima.

In the case of the Chiapas Sierra Madre mountains, an area with high modularity due to protected areas and biosphere reserves, the authors highlight how shade-grown coffee in the region helps create intermediate modularity. The shade-grown coffee plantations, which also host trees, act as a source of biodiversity and connectivity between the reserves and protected areas.

However, the recommended rust-resistant plants require less shade, which instead would promote monocultures and impact the overall modularity.

“This intermediate modularity landscape based on agrobiodiversity is at risk due to the lack of matching legal and institutional arrangements to address the coffee rust, a social-ecological crisis which defies conventional boundaries of time, space and politics. Our case study reveals that institutions limited to national borders have proved to mis-match with this social–ecological crisis,” Ituarte-Lima explains.

To analyze this social-ecological crisis, the authors study mismatches of law and formal institutions across geographical, time, and power levels.

Looking at the coffee leaf rust epidemic from a geographic perspective, the authors note that the epidemic not only transgresses legal and political boundaries, it also affects Arabica coffee all the way from Columbia to Central America, to Mexico, to the Caribbean. Furthermore, the Arabica coffee plant is affected severely at low altitudes, and inconsistently at high altitudes.

Looking at the time scale, the authors revealed that responses were only partial solutions in the coffee leaf rust epidemic. For instance, new coffee varieties promoted as a solution to coffee leaf rust may convey new problems if compatibility with local ecosystems and syndromes of production is not considered. Furthermore, some of the alternative coffee plants were sun grown instead of shade grown, which has even further implications for biodiversity.

Libert-Amico highlights that, “Land-use change from the present polyculture agroforestry systems to coffee varieties which require less shade cover, as promoted by government institutes and private companies, is identified as a driver of ecosystem degradation.” When examining the power scale, the authors also found that policies have promoted companies to take over coffee production, instead of transnational institutes and local cooperatives. 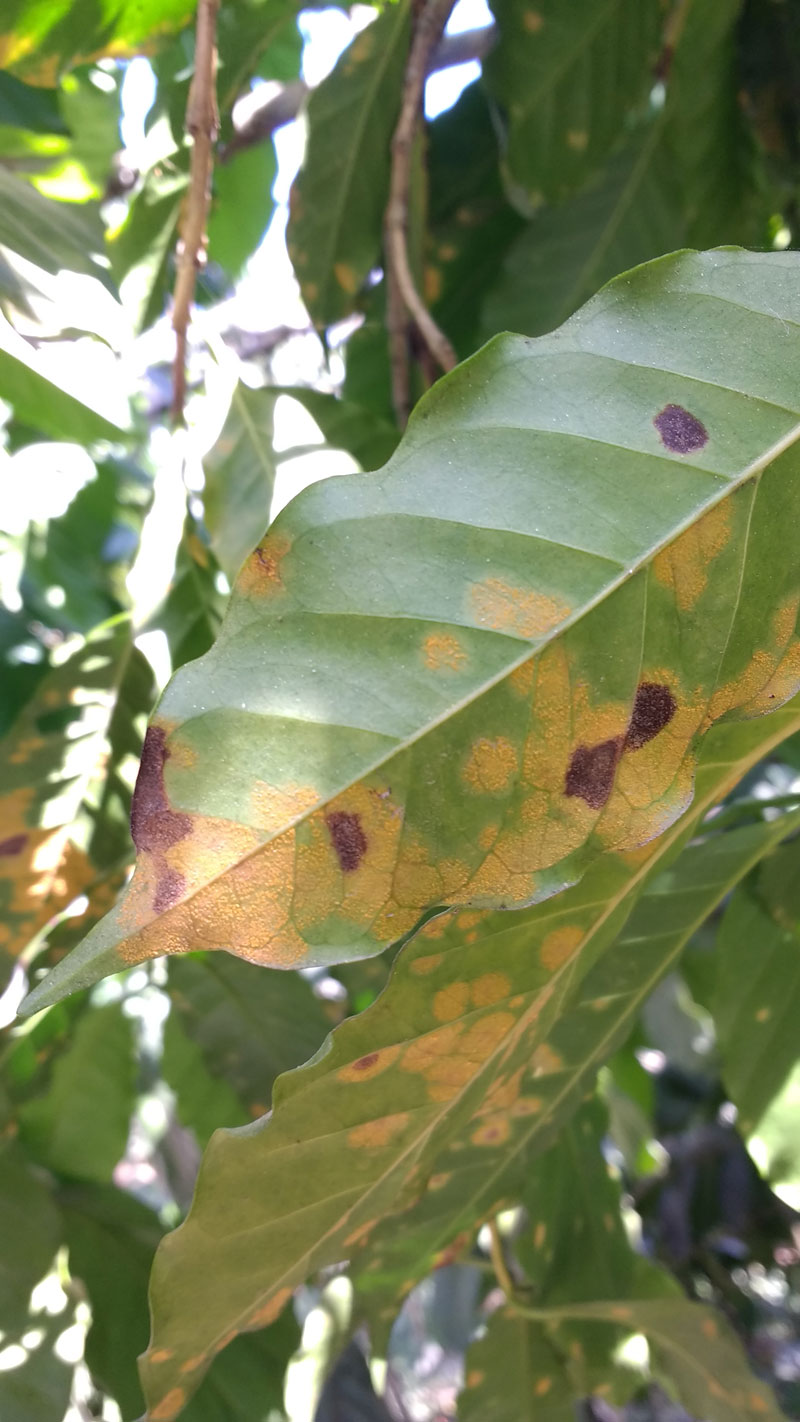 Coffee rust on the slopes of the Tacana volcano. Photo: A. Libert Amico

The future of coffee

Despite the many mismatches, there are some positive initiatives too. In Chiapas, there is still a push for organic, shade-grown coffee from local coffee cooperatives in the region. Furthermore, new multi-stakeholder initiatives are pushing for a better emergency response, aiming to improve coordination, and challenge models that degrade ecosystems.

"As the coffee rust continues to hamper production, and low coffee prices deepen the difficult situation coffee producers face, this research warns that short-term thinking may lead to pathological pathways in the mid to long term, by undermining shade-grown agroforestry systems and the ecosystem services they provide, while increasing the vulnerability of smallholders", says lead author Antoine Libert-Amico.

To complete this case study around coffee agroforestry in Chiapas Sierra Madre, Mexico, the authors used a combination of sources, including: primary and secondary written sources, interviews, field trips, and participant observation in national and subnational meetings about coffee agroforestry.

Field work was completed between 2013 and 2016, where 102 semi-structured interviews were carried out with: farmers; technicians; coffee cooperative managers; government authorities from municipal, state, and federal levels; as well as NGO representatives. All interviews were conducted in Spanish, using a snowball sampling technique. Interviews were aimed at creating ethnographies that depicted land-use decision-making.

To identify matches and mismatches in legal frameworks and institutional frameworks, secondary sources were used. This methodology allowed for insight into power structures and equity around sustainability.

Claudia Ituarte-Lima is a researcher focusing on international law. She specializes in legal and governance transformations for sustainable development and environmental justice. She also works as an advisor at SwedBio, a science-policy interface.

Thomas Elmqvist is a professor researching natural resource management and urban landscapes. Specifically, he focuses on ecosystem services, land use change, urbanization, natural disturbances and components of resilience including the role of social institutions.