Water is not only a generator of ecosystem services like food and energy, it is also a critical agent of change and a victim of change through droughts and floods caused by global warming, a new study explains. Photo: PxHere

A friend and a foe

Amid global environmental change, water becomes both the victim and the instigator for irreversible damage

Water is fundamental for all life on Earth. As it flows through rivers and streams, rests in lakes and oceans, and falls as rain, water it serves as the bloodstream of the biosphere.

Any changes to this stabilizing capacity can push our planet’s ecosystems or societies to the brink of collapse.

In a study recently published in Journal of Hydrology X, centre researchers Malin Falkenmark, Lan Wang-Erlandsson and Johan Rockström describes three different roles water plays in maintaining or disrupting the resilience of a system: water can be the “source” of resilience which maintains important functions of an ecosystem, it can be the “victim” of change caused by for instance land-use change and pollution or it can also be the “driver” of change, causing significant damage through for instance droughts or floods.

Water is not only a generator of ecosystem services like food and energy, it is also a critical agent of change, for instance functioning as a greenhouse gas and a regulator of temperature on Earth, and a victim of change through shocks like droughts and floods caused by global warming

Generally, the authors explain, water influences resilience through eight fundamental functions. These include regulation of the Earth’s climate and energy balance, regulation of the water cycle, production of biomass and food, societal water supply, transport of nutrients and pollutants, and upholding of aquatic states.

“There is rising indicative evidence of how deterioration of fundamental water functions has contributed to or accelerated human conflicts and national instability,” co-author Johan Rockström explains.

One of the worst scenarios would be the collapse of the Amazon rainforest or a total glaciers meltdown, but as the authors note, this has fortunately not been observed yet. 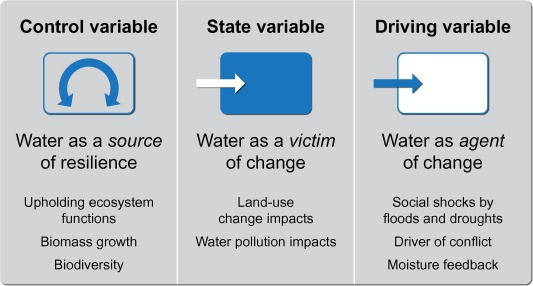 The three roles of water for system resilience.

In the Anthropocene water issues are global

One of the core messages of the study is that in the new geological epoch of the Anthropocene, where humans is the driving force behind planetary change, water resilience is no longer just about water, it is linked to climate change, dietary choice, trade, consumption and much more.

Furthermore, water issues have gone global. In the past, water were studied at catchment scale, lake scale or community scale. Today, we talk about the global effects of melting glaciers, changing rainfall patterns and increasing drought risks. Added to the scale is also the speed of which changes are happening and the responses they require. Current human interference in all water functions is modifying life support systems on the entire planet.

“Regime shifts in the past have occurred at the local to regional scale, but with the dawn of the Anthropocene, we now need to consider risks of human induced regime shifts at the planetary scale,” the three authors conclude.

Lan Wang Erlandsson is a postdoctoral researcher in the Planetary Boundary Research Network focusing on the large-scale interactions between land, water, and climate, and their implications for resilience