A new study identifies connections between inequality and the environment. For instance changes in fish stocks affect the livelihood of men and women differently. In some parts of sub-Saharan Africa, increased scarcity may not only reduce women’s income but also force them in to “fish-for-sex” transactions to secure a steady food supply. Photo: O. Henriksson/Azote

Inequality and the biosphere

Connecting the dots between social inequalities and environmental change

Rising inequalities and accelerating environmental change are two of the most significant challenges of the twenty-first century. But how are they linked? Scientists still struggle to answer that question.

A new study in the journal Annual Review of Environment and Resources presents a literature review of the linkages between social inequality and changes in the environment. It is an outcome of the Beijer Young Scholars programme which consists of a transdisciplinary group of 19 early career scholars from around the world. Several of the members of the programme are current or previous researchers from the centre and its partner, the Beijer Institute of Ecological Economics: Maike Hamann, Emilie Lindkvist, Juan Rocha, Jonas Hentati-Sundberg, Caroline Schill and Patrik Henriksson.

Their study shows that most research is one-directional, i.e. focusing on the specific effects of a social inequality on the environment, and fails to take into account a more complex understanding of how inequality and the biosphere interact with each other.

"Comparatively less research is concerned with other types of inequalities, such as gender differences, and how they impact – and are impacted by - the biosphere."

In their study, the authors identify six pathways of connection between inequality and the environment. Two of them demonstrate how environmental changes such as extreme weather events and disease outbreaks, or more gradual changes such as climate change, increase or decrease inequalities in communities. The other four pathways look at how inequality has an effect on the environment through human actions, which can be shaped by perceptions of fairness, personal aspirations, collaboration and decision-making. 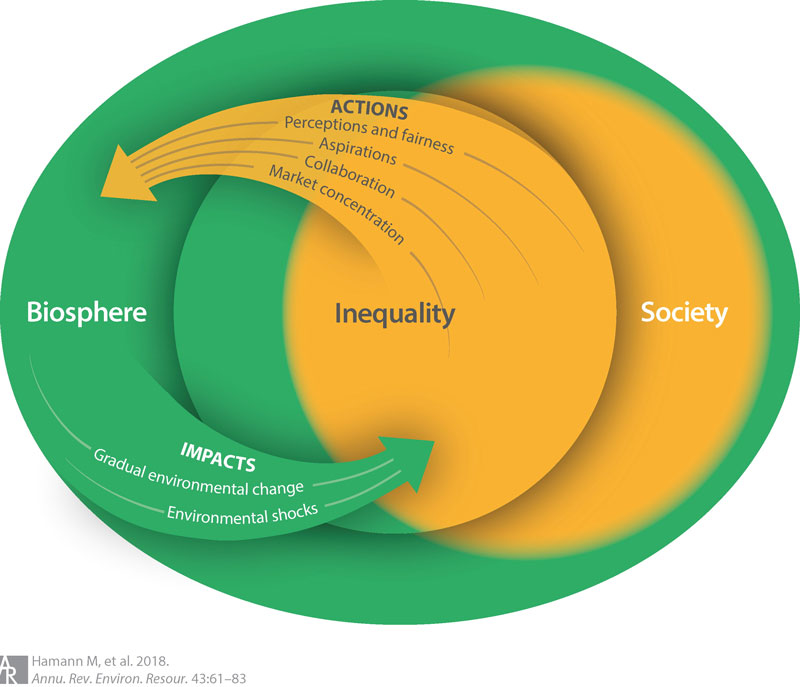 Interactions between inequality and the biosphere in social-ecological systems.

The biosphere is naturally unequal. Not all places on Earth are equally endowed with access to energy resources, freshwater reserves or appropriate conditions for large-scale agricultural production. That has led to an inequality of opportunities for societal development and economic expansion in different parts of the globe. However, natural disasters such as storms, floods, droughts and epidemics tend to hit low-income communities the hardest, wherever they are.

Hurricane Katrina, an extremely destructive and deadly Category 5 hurricane that struck the Gulf Coast of the United States in August 2005, is one example. When the levees broke in New Orleans, floodwater surged into low-lying areas that were mostly populated by the economically marginalised, notably African-American communities. This impact was further exacerbated by their lack of access to transport and ability to evacuate.

The 2014-15 West Africa Ebola epidemic not only resulted in devastating personal and social impacts, but also increased levels of poverty in Liberia, Guinea and Sierra Leone, thus exacerbating inequality across the West African region.

Although extreme events may increase inequalities, the authors argue that the outcome also depends on how people respond to them. In Honduras, Hurricane Mitch caused widespread destruction in 1998, hitting the poorest households the hardest. However, in the wake of the disaster, efforts by poor communities led to a more equitable distribution of land and a reduction of forest conversion rates. This in turn helped protect crucial forest areas, diversify incomes, and render the communities themselves more resilient to future disasters.

More gradual environmental change can also have a strong impact. Take fisheries, for example. Many of the world’s least developed countries that are most vulnerable to impacts of climate change are also heavily reliant on seafood and marine resources In these countries, climate change is likely to reinforce economic hardship and hamper development and poverty alleviation. It may also exacerbate inequalities on a local level. Changes in fish stocks affect the livelihood of men and women differently. In some parts of sub-Saharan Africa, for instance, where women generally have limited access to marine resources to begin with, increased scarcity may not only reduce their income but also force them in to “fish-for-sex” transactions to secure a steady food supply.

How inequality affects the environment

Although there are numerous studies that explore aggregated economic and environmental data, many underlying questions of how humans affect the environment around them remain unanswered.

The authors of the study argue that “subjective inequality”, an individual’s own perception of existing inequalities and beliefs about what is just and fair, can be a significant driver for how someone behaves towards the environment. For example, perceptions of inequality, fairness and even jealousy have played an important role in the success or failure of marine protected areas. If people feel they have been treated unfair in getting access to a marine protected area, jealousy may lead some to encroach or even sabotage it, even if they were positive to creating it in the first place.

Then there are aspirations. Social inequality highlights the difference in lifestyles between the rich and the poor. In many parts of the world, aspirations to achieve a higher living standard and status lead to behavioural changes, such as an increase in meat consumption. This, in turn, has significant impacts on land use and the conversion of natural habitat to pastures for livestock.

Collaboration and collective action are one of the ways in which shared natural resources can be sustainably managed. But if there is inequality within the group that is managing a shared resource, this may lead to an erosion of trust, less cooperation, and the unsustainable use of the resource.

Finally, market concentration can cause inequality which could benefit or harm a natural resource. The global seafood industry, where a small number of actors has a disproportionally strong influence on the management of the resources, is a fitting example. The big fish within the seafood industry can collectively try to manage the resources more sustainably but they can also push through their own interests and thus exclude actors that are smaller and already marginalised.

With their study, the authors show that environmental change and inequality must be looked at in more depth. Current research is scarce and disconnected. “Examples of feedbacks between inequality and the environment must often be pieced together, drawing on multiple studies from different disciplines,” co-author Emilie Lindkvist explains. Together with her co-authors she calls for more research into these feedbacks, calling their work a “first step toward a more systemic, cross-scale and multidimensional understanding” of the interactions between inequality and the environment.

"Future research will need to explore these and other pathways further, as well as analyse the many context-specific differences in outcomes for both humans and nature," they conclude.