Researchers have analysed 32 initiatives worldwide to develop practical guidance for navigating tensions and power dynamics among co-production participants. Pictured is from a field trip by one of the initiatives, the Durban Research Action Partnership. Photo: J. Cockburn

Too much time is spent debating which agenda for change is best, instead of finding ways to facilitate better interactions among different interests

GETTING ALONG AND MAKING CHANGE: One could imagine that when researchers and people outside academia work together in a “co-production” process, things do not always run smoothly.

With competing interests, agendas and ways of seeing the world, tensions can certainly arise. Think about high-level climate meetings like COP26.

But with the right approach, tension can be used to create broad ownership and action for transformative change, according to new research published in Global Environmental Change. 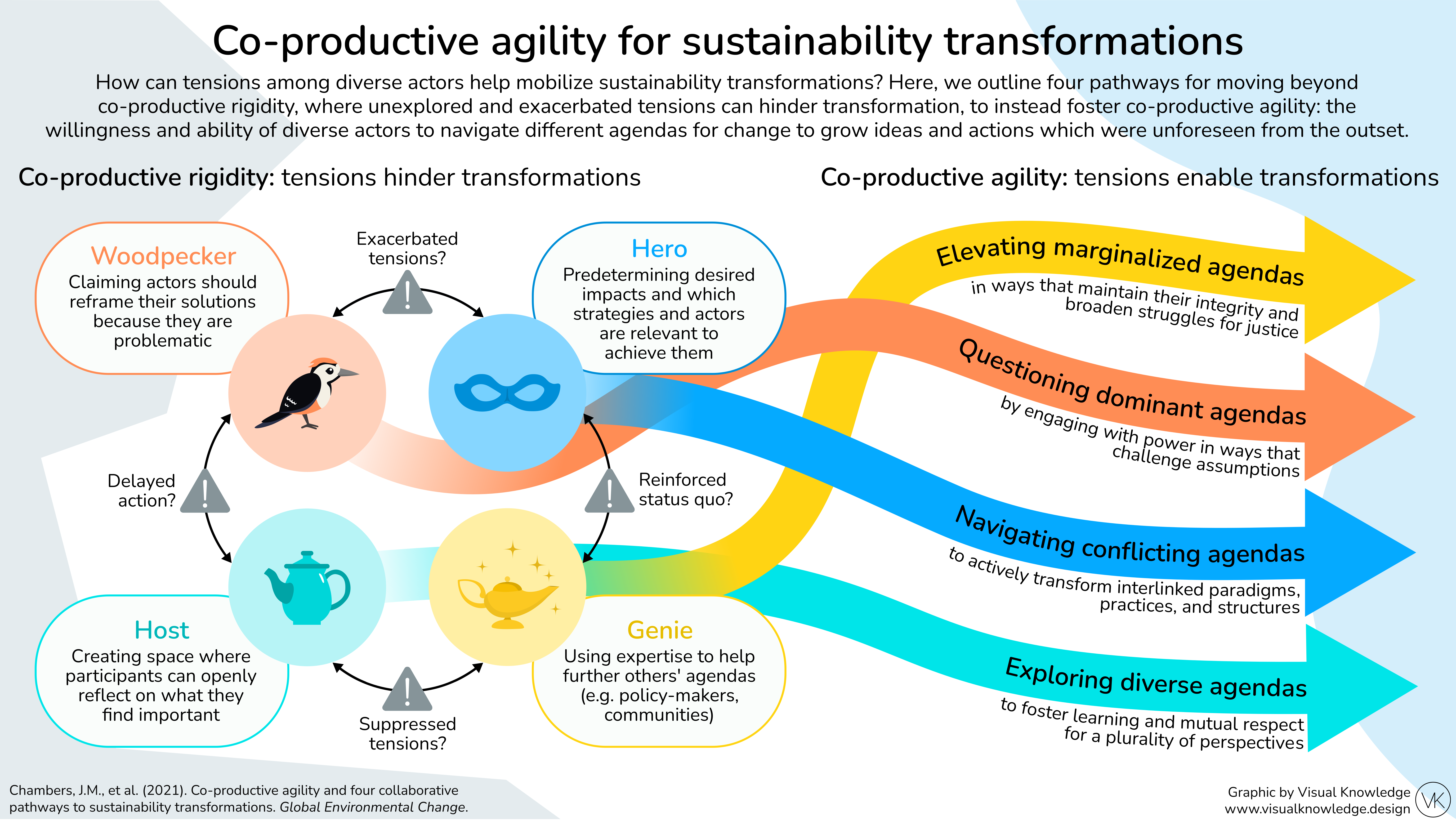 The study, which was led by Josephine Chambers from Wageningen University, with centre researchers Henrik Österblom, Maria Tengö, Angela Guerrero and a team of international scientists, analysed 32 initiatives worldwide to develop practical guidance for navigating tensions and power dynamics among co-production participants.

It is a follow-up from a previous paper in Nature Sustainability, which identifies six different types of co-production and explores when and how they may be effective.

In their new paper, Chambers and her colleagues suggest that “co-productive agility”—the willingness and ability of diverse actors to engage in reflexive dialogues to develop shared ideas and actions that would not have been possible from the outset—is vital for turning tensions into transformations.

Exacerbating or suppressing tensions can ultimately hinder transformation. An emphasis on ‘agility’ can support actors to engage with seemingly contradictory agendas.

The researchers argue that too much time is spent debating which agenda for change is best, instead of finding ways to facilitate better interactions among different interests.

The study describes four facilitator roles, highlighting how each approach may suppress or exacerbate tensions to ultimately hinder transformation.

“We identify four complementary pathways where co-productive agility can turn tensions among these facilitator roles into transformations,” say the authors.

In the first pathway, elevating marginalised agendas, societal actors who have been marginalised from decision making work together with researchers to elevate their perspectives. For example, centre colleagues Maria Tengö and Pernilla Malmer have been collaborating with indigenous organizations around the world to develop new approaches for how international biodiversity assessments can respectfully include and prioritize indigenous and local knowledge.

The second pathway seeks to open up questioning around dominant agendas by collaboratively engaging powerful actors. Scientists engaged in the Seafood Business for Ocean Stewardship initiative were able to create a safe space for scientists and CEOs of the world’s largest seafood companies to engage with, and address, ocean sustainability problems.

The third pathway, navigating conflicting agendas, embraces bringing actors together across power differences to transform decision-making. For example, a co-management process in a Zambian fishery created platforms for interest groups to openly discuss locally relevant issues before bringing actors together in fair spaces for contestation and institution building.

The final pathway, exploring diverse agendas, brings actors together through processes that foster mutual understanding and respect for a plurality of perspectives. For example, the Leeds City Lab—which involved diverse sectors — emphasized the emotional aspects of co-production to manage ensuing tensions and embrace vulnerability and “not knowing” rather than seeking to resolve differences.

Overall, the authors conclude: “We hope this can help facilitate reflexivity among scientists on the different roles we may take in our collaborative engagement, and thereby enable more thoughtful, agile and powerful pathways to just and sustainable futures”.