Getting a more complete picture of our impact on nature

In a new study, researchers suggest a way to better understand the environmental impacts of corporate and public entities. Photo: Verstappen Photography/Unsplash

NOT UP TO THE TASK: The Environmental, Social and Governance metrics are a set of standards designed to assess the impact an investment might have on the environment. Centre researchers have previously criticised the use of the metrics for being inadequate.

In a study published in Environmental Research Letters, other colleagues draw similar conclusions:

“Developing a new metric for assessing the systemic impacts of businesses, investors and other actors on the Earth system is extremely important, since the current standards are not up to the task,” says centre researcher Steve Lade, first author of the new study.

In the new study, Lade and his colleagues suggest a way to better understand the environmental impacts of corporate and public entities.

The starting point of the study is the planetary boundary framework and its 'safe' global limits of human pressures on the Earth system—the planet’s climate and ecosystems.

However, in order to enable companies, cities and other actors to assess the impacts of their decisions, it is important to understand how planetary boundaries interact at smaller scales.

One example is how deforestation in tropical Africa can trigger other impacts on climate, land and water elsewhere. Therefore, Lade and his colleagues started by tailoring their new metric around sub-global interactions between three processes: climate change, vegetation cover and surface water runoff.

One of the most interesting results, according to the authors, was that the Earth system impact of deforesting the Amazon rainforest was amplified by a massive 2.5 times according to the new metric. 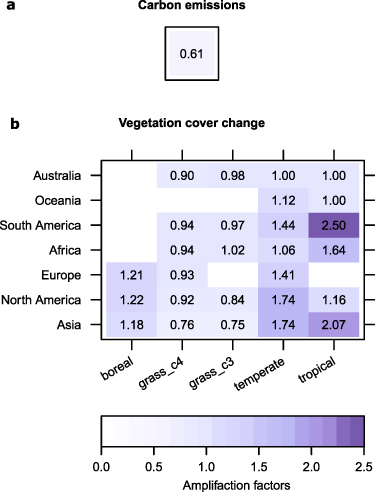 A first step and a word of caution

Moreover, it is a first step towards a way to account for key interactions among multiple Earth system processes, something that has so far been completely missing in all major corporate impact and risk assessment frameworks.

For example, the fact that the new metric resulted in 0 for Australian tropical forests only communicates that incremental loss of these forests would not currently have global scale impacts on climate, land cover or water.

The local effects on rare or threatened species might, however, be severe.

The approach consisted of two main steps using the spatially-resolved dynamical global vegetation model LPJmL (Schaphoff et al 2018 to estimate the strengths of cross-scale interactions between climate, land and water; and using these interaction strengths in a simple feedback model to calculate measures that assess the consequences of these interactions for the Earth system, specifically an amplification factor and an Earth system impact metric.

Detailed descriptions of the calculations are available here

The authors use the terms 'pressure' and 'state' in line with the (drivers, pressures, states, impacts, responses) framework and reserve the term 'impact' for the cumulative change in state once all feedbacks, themselves triggered by an initial change in state, have played out.