Forestry adaptations to storms are slow in Sweden, in contrast to e.g. German state forestry which emphasises maximising tree growth and resilience to several stresses and disturbances. Photo: Skogens bild/Azote

Increased resilience to storms comes at the expense of private economic return, but forest owners of highly vulnerable land may profit from mixed forests and continuous cover forestry

A PERFECT STORM: Forest management and the sustainability of forestry is a hot potato in Sweden. One of the most controversial issues is whether the current model, which is focused on clear-cutting and spruce dominance, should be complemented with continuous cover management and mixed forests.

What will be most valuable for landowners and society at large? And how is this influenced when climate change and more frequent extreme weather events are added into the equation?

These issues are the focus of a study published in Scandinavian Journal of Forest Research. It compares the costs of storms in mixed forest plots to spruce-dominated ones.

The aim of our study was to analyse the potential trade-offs for the forest owner between private profitability and increased resilience to storm damage.

The study was carried out in collaboration with researchers from the Swedish University of Agricultural Sciences and the Technical University of Munich, Germany.

The study focused on forests in Jönköping County, Southern Sweden. Simulations were based on the state of the forests in 2010 and then tested five different management and storm scenarios for 100 years into the future. As expected, increased resilience to storms came at the expense of private economic return.

On the most vulnerable forest stands, the results were reversed. Here, mixed forests with more broadleaves and continuous cover forestry were more profitable for the individual forest owner than business as usual, when storms were included in the equation.

The study also compared the situation in Sweden with Germany, where spruce-dominance and clear-cutting has been increasingly abandoned since the 1980s. This has resulted in improved recreational values and increased resilience to a range of different stresses and disturbances.

Use of term misleading

In Sweden, however, the adoption of mixed-species and continuous cover forestry has been very slow, even though they are welcomed by the Swedish Forest Agency.

“Spruce and clear-cutting remain dominant in Sweden since the storm risk is generally ignored in the calculations of economic return,” says Hahn. The standard forestry planning tool, HEUREKA, was used for the simulations to facilitate the integration of storm in sector policies.

The study also criticises how the term “natural insurance value”, related to ecosystem resilience, has been reformulated in economics. By equating this term with the subjective value of risk reduction (which is zero for risk neutral persons), some economists have turned “natural insurance value” far away from the original ecological meaning, the authors conclude.

While the study and its simulations provide a pedagogic illustration of the need for resilience thinking in the forest sector, it only takes one disturbance, storm, into account.

To fully account for the general resilience value of forest ecosystems, more disturbances and more ecosystem services need to be addressed.

The study employed a monetary valuation, Net Present Value, and calculated the “resilience value”. This was defined as the expected risk reduction (reduced damage cost) for the private owner provided by an alternative management compared to the risk in Business As Usual (BAU). Since damage risk is typically smaller for Continuous Cover Forestry (CCF), this has a positive resilience value. However, the Net Present Value was smaller for CCF, also when storms were accounted for (Fig. 1, left below). But on the most storm sensitive plots, the NPV was larger for both CCF and for mixed forests, compared to BAU, when storms were factored in (Fig. 2, right below). 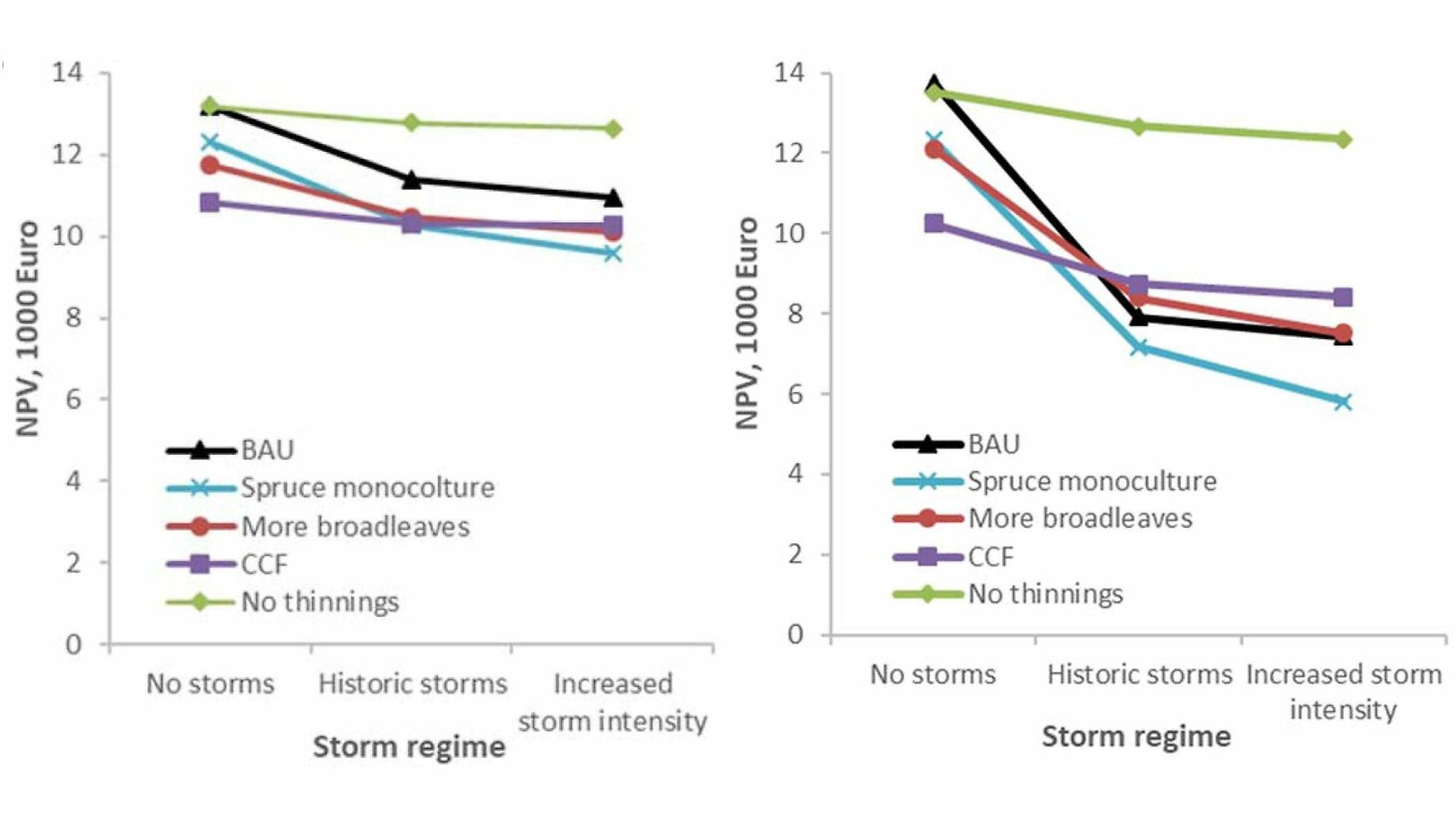 Figure 1, left: Figure 1. The business as usual (spruce dominated) forestry is more vulnerable to storms but still has a higher Net Present Value than Continuous Cover Forestry and Mixed forests (More broadleaves). No thinning is most resilient to storms but has many other disadvantages. Fig. 2, right: The economic return (NPV) in euro per hectare for the five management scenarios of the most vulnerable plots, given three different future storm intensities.