Female tuna fish traders in Ghana called "Big Mammies" have created a niche for themselves in a typically male-dominated industry because they are central to the local trade of tuna. They also act as financiers of many fishing expeditions but large-scale fishing fleets backed by major Asian seafood companies are taking over. Photo: P. Bannerman/MFRD

No place for Big Mamma

If you live somewhere in Europe and you like canned tuna, chances are it could be from Ghana. The fast-swimming saltwater fish has been exploited in Ghana for centuries but over the past 50 years it has developed into a global industry with the European Union being their biggest market. Still, local markets remain important with high demands for tuna (largely smoked) and women play a powerful part in both supplying these demands and funding the industrial fleet.

A unique niche that is changing

The women, or "Big Mammies" as they are known, enter the tuna fish industry at a young age and are responsible for up to 25% of the sales of landed tuna to the local market. They are key to the Ghanaian tuna industry because they also act as financiers of many fishing expeditions. That gives them rights to huge parts of the catch.

The role of the women is also established through local female traders known as "Fish Mammies" who are linked to the "Big Mammies" through sales and credit arrangements.

By providing large sums of capital to an industrial tuna fishing fleet the Ghanaian female intermediaries are unique because they have managed to create a niche for themselves in a typically male-dominated global industry.

But things are changing.

Bait-boating, also know as pole and line, which involves fishers using fishing rods to individually hook tuna, is the predominant source of income for the "Big Mammies" but is becoming increasingly less profitable in the Ghanaian tuna industry. Instead, large-scale purse-seine fishing backed by major Asian seafood companies are taking over.

They are considered more efficient and profitable because they require less crew and are capable of travelling farther with bigger holding facilities for more tuna. The result is a gradual replacement by purse-seiners, leaving bait-boats and the "Big Mammies" behind.

Elizabeth Drury O’Neill, a PHD student at the centre, warns that the need for their financing activities and provision of funds will most likely be reduced along with their access to tuna for local markets.

"If they are excluded from decision-making, as official statistics and reports show today, then it is very unlikely that they will be included in the future of the global seafood industry," she writes in a study published in the journal African Journal of Marine Science. Together with colleagues from University of Cape Coast in Ghana, she has looked at the changes taking place in the Ghanaian tuna industry. 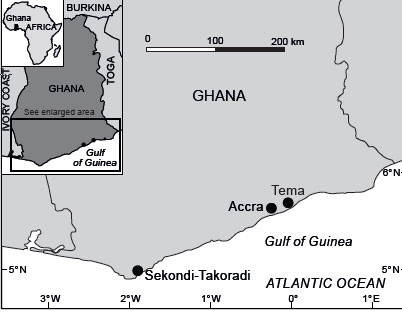 The big fish are taking over

The results of the study shows that the increasing market power by Asian seafood companies such as Thai Union Group will play a major role in the future sustainability of Ghanaian tuna fisheries.

"The big companies are backed, and ultimately protected, by larger parent corporations which have access to substantial capital – vital in a fishery where significant losses can be incurred," Drury O’Neil and her colleagues write.

These big companies are considered "keystone actors" because they dominate all segments of global seafood production and revenues while also controlling huge proportions of global marine stocks.

With that name tag also comes responsibilities. As IUU continues to impact the industry’s future prospects (tuna stocks continue to decline), better monitoring, control and surveillance is needed. But that requires funding, which West African countries do not have. As a result, any upgrades to monitoring and control must come from external investors, but they will still be entangled in weak governance, corruption and conflicts of interest among the countries in the region.

Ghana’s tuna industry, including the "Big Mammies", are therefore dependent on the willingness of these keystone actors to drive positive change and make sure local livelihoods are not squeezed out.

"The lack of interaction and eventual cooperation seen in Ghana, between the private sector and formal governance, can and should be combated during formulation of agreements and partnerships," says Drury O’Neill.

In fact, she argues, a critical area of African fisheries reform lies in the negotiation stages of licenses and access, which are today very secret.

"Negotiations need to be made public and should engage, if present, African civil society organisations that can demand good governance through scrutinizing, tracking and monitoring," she concludes.

Data were collected from Tema, Accra and Sekondi-Takoradi in Ghana, where the industrial tuna fishery and most governmental institutions are located. A total of 31 companies, organisations and government ministries formed part of this study. Data were collected between March-May 2013.

Elizabeth Drury O'Neill works on challenges around Small-Scale Fisheries Governance. Her PhD project takes a systems perspective to look at governance, the associated market influences and the consequent benefit flows from marine ecosystem services. The research uses mixed-methods and is case-orientated with sites in Zanzibar and the Philippines.