A new Discussion Paper published by Swedbio outlines the links between the Aichi Biodiversity Targets under the UN Convention on Biological Diversity and the Sustainable Development Goals and Targets under the 2030 Agenda. Photo: B. Spragg/Flickr

the 2030 agenda and ecosystems

Many synergies and overlaps

Biodiversity and ecosystem services are essential to achieve the 2030 Agenda for Sustainable Development. A new Discussion Paper published by Swedbio, a knowledge interface at Stockholm Resilience Centre on resilience and development, outlines the links between the Aichi Biodiversity Targets under the UN Convention on Biological Diversity and the Sustainable Development Goals and Targets under the 2030 Agenda. The two processes can be mutually supportive for effective implementation, the report argues.

Maria Schultz, director of Swedbio and lead author of the report

Using a scoring system based on whether Aichi Biodiversity Target elements are directly, indirectly or not considered across the suite of SDG Goals and Targets, it was found that three of the Aichi Biodiversity Targets (2 Biodiversity values integrated, 16 Nagoya Protocol in force and operational & 20 Financial resources from all sources increased ) are fully covered under the SDGs, while only one (17 NBSAPs adopted as policy instrument) is not covered at all. All elements of five Targets (3 Incentives reformed, 5 Habitat loss halved or reduced, 6 Sustainable management of marine living resources, 12 Extinction prevented & 18 Traditional knowledge respected) are indirectly considered in the SDGs, while the elements of one (11 Protected areas increased and improve) is either indirectly covered or absent. The elements of each of the remaining nine are either directly or indirectly considered.

The kind of analysis developed in this report helps the understanding of such synergies. This can be helpful in the implementation of both processes.

"The report also strengthens the message that, if effectively implemented, the conservation of biodiversity and ecosystem services can lead to substantial gains in many facets of sustainable development, "says Tristan Tyrrell, Programme Officer at SwedBio and co-author of the report.

Mainstreaming is also the central theme of the 13th meeting of the Conference of the Parties (COP 13) of the Convention on Biological Diversity in Mexico on 4-17 of December. 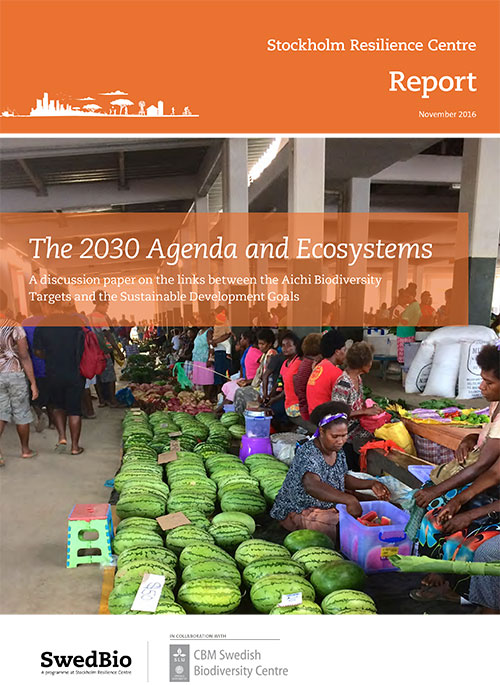 For more information about the report please contact Maria Schultz, director of Swedbio and lead author of the report.