Researchers have developed a new method to expand on current ecosystem services assessments which are often based on secondary data like land cover maps or global databases rather than field data. Photo: H. Sinare

A patchwork of benefits

Some two thirds of the 1.4 billion people living in extreme poverty live in rural areas. Many of them are farmers and the majority only has access to small patches of farmland.

Not surprisingly, substantial investments are currently being made in agriculture to increase yields of smallholders to increase food security and reduce poverty. A one-eyed focus on increased crop production might, however, lead to unintended side-effects on other ecosystem services on which people also depend.

In order to avoid such negative trade offs it is becoming increasingly important to identify, map, and model how ecosystem services respond to different investments. Such ecosystem services assessments have so far mainly focused on a few kinds of services and have used secondary data like land cover maps or global databases rather than field data. This may be seriously misleading, according to a new study in the journal Ecosystem Services.

The study is part of Hanna Sinare’s PhD-thesis which she defended in November 2016 in Stockholm. The title of the thesis is Benefits from ecosystem services in Sahelian village landscapes and it is based on in-depth fieldwork in six villages in northern Burkina Faso.

The team behind the paper, which also includes centre colleagues Line Gordon and Elin Enfors Kautsky, call for more nuanced methods. As a consequence they have developed a new participatory method to identify "social-ecological patches". These are defined as "landscape units that correspond with local descriptions of landscapes, characterized by a combination of land use, land cover and topography".

“Our method obtains a more nuanced understanding of how people use ecosystem services and the results clearly illustrate the multifunctionality of the village landscapes, where all social-ecological patches, except bare soil, are shown to generate substantial contributions of multiple provisioning ecosystem services,” Hanna Sinare adds.

Fields were dominant in all villages, covering 40–73% of the area, whereas the proportions of depression and homesteads were relatively small. Fallow and shrub land had a similar coverage but varied substantially among villages. Forests were scarce and only appeared in small patches. Bare soil were shown to occupy relatively small patches but covered up to 9% of the village area.

The identification of the social-ecological patches and their ecosystem services was based on several field methods, including drawing “resource maps” and “seasonal calendars” of the six villages in focus groups with men and women; “transect walks” together with villagers with stops every 300 m to describe vegetation, soil and crops; and mapping of the social-ecological patches on satellite images.

Five groups of ecosystem services-related benefits for livelihoods were identified: annual crops for consumption; nutritional diversity and medicinal uses; material assets and energy (e.g. firewood); saving/ insurance (e.g. livestock that can be sold to gain cash income in times of crisis); and income from sold products.

These livelihood benefits were found to be generated across at least three different social-ecological patches. Moreover, the generation of ecosystem services from the patches vary over the season and between years, and it was shown that income from ecosystem services becomes more important when staple crops fail. The local landscape contributed with 68% of what was used to replace the value of cereals when crops fail. Livestock was ranked highest as compensation and the majority of the local ecosystem services (82%) are sold to gain cash income, while increased direct consumption of fruits and leaves only played a limited role. Activities not related to local ecosystem services were the second most important way of compensating for crop loss, e.g. decreased consumption through postponing weddings and travels. 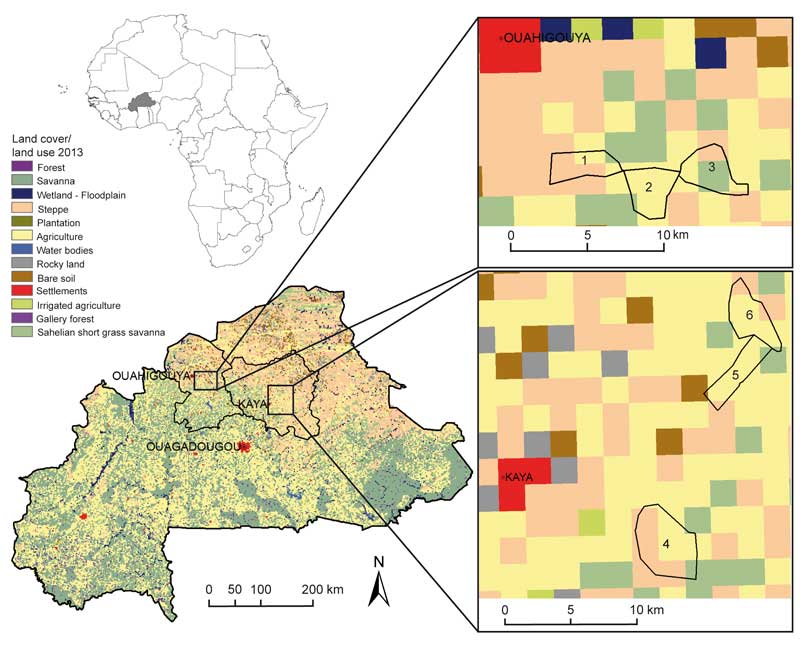 Sinare, Gordon and Enfors conclude that their new method for assessing ecosystem services must be further developed in order to assess its potential to be up-scaled to for instance provincial level. They also encourage further development to make it more useful for landscape planning, fully bridging the gap between the local use perspective and the scales at which development interventions operate.

In terms of poverty alleviation, they also want to look into ways of developing the method to uncover who benefits from the ecosystem services in the villages and how investing in nutrient and labour inputs will influence the pattern of ecosystem services generation within patches.

The fieldwork was carried out in six villages, located in the Nord and Centre-Nord administrative regions of Burkina Faso (see map above) representative for the conditions of the majority of the population in the study regions. Data was collected during four field periods: 1) September–November 2011, 2) July–August 2012 (complementary data collection), 3) October–November 2012 (major data collection), and 4) January 2016. The identification of social-ecological patches were based on several field methods: (i) drawing resource maps in focus groups with men and women; (ii) transect walks across the village landscape together with two to four villagers, with stops every 300 m to describe vegetation, soil and crops; (iii) preliminarily identified social-ecological patches from the two previous steps were tested in focus groups, which led to adjustments, e.g. the separation of shrubland and fallow.

Hanna Sinare is a PhD student at the centre. Her PhD research focuses on the spatial and temporal patterns of ecosystem services in Sahelian village landscapes, and the interactions between these patterns and rural livelihood strategies.

Elin Enfors' main research interest concerns the dynamics of small-scale agro-ecosystems around the world, with a special focus on pathways to social-ecological transformation in these systems.