The new Intergovernmental Platform on Biodiversity and Ecosystem Services (IPBES), is breaking new ground in how research on social-ecological systems is assessed and how knowledge from different cultures is assimilated. Photo: IISD Reporting Services

The new Intergovernmental Platform on Biodiversity and Ecosystem Services (IPBES), is breaking new ground in how research on social-ecological systems is assessed and how knowledge from different cultures is assimilated. Photo: IISD Reporting Services

A major global assessment of the state of the world’s pollinators was published in late February during a UN meeting in Kuala Lumpur. The report, the first from the new Intergovernmental Platform on Biodiversity and Ecosystem Services (IPBES) created in 2012, paints a comprehensive picture of the decline in pollinators.

A second assessment on scenarios and modeling accompanied the pollinators assessment. Researchers and policy analysts at the Stockholm Resilience Centre have been supporting IPBES’s work to bring together knowledge bases for the report and travelled to Malaysian capital to participate in its fourth plenary.

The plenary in Kuala Lumpur also approved a scoping report for a global biodiversity and ecosystem assessment, developed by an expert group comprised of experts such as centre director Johan Rockström and Belinda Reyers, head of the new centre-hosted GRAID programme.

Developing new types of scenarios
IPBES is an independent intergovernmental body for assessing the state of the planet's biodiversity, its ecosystems and the essential services they provide to society.

It is breaking new ground in how research on social-ecological systems is assessed and how knowledge from very different cultures is assimilated – scientific knowledge, indigenous knowledge and local knowledge.

Many indigenous peoples, for example, are cautious about engaging because historically they have seen their knowledge exploited without their consent, and without sharing in the benefits.

"Building trust among these diverse groups is critically important"

Garry Peterson from the centre is a coordinating lead author for the scenarios and modeling assessment chapter relating to ecosystem services. Peterson recently co-authored a new paper in Sustainability Science arguing that IPBES "currently lacks a long-term scenario strategy".

The authors say that for IPBES to capture the social-ecological dynamics of biodiversity and ecosystem services (for example water purification or pollination), scenarios must include a great diversity of local contexts, while also including global tele-coupling – how effects in one place can cascade far and wide due to global connectivity.

"The assessment concludes there are not enough models that bridge multiple knowledge systems. But there is a great opportunity to develop these types of models and use scenarios to bridge scientific, indigenous and local knowledge," says Peterson.

The Multiple Evidence Base
Maria Schultz, Pernilla Malmer and Maria Tengö, all part of the centre’s SwedBio programme, are working closely with indigenous peoples and local community organisations to connect indigenous and local knowledge with scientific knowledge.

The Stockholm Resilience Centre has recently been awarded three years funding from the Swedish funding agency Vetenskaps Rådet to develop what is known as the Multiple Evidence Base approach further. This approach helps connect knowledge systems views from indigenous, local and scientific knowledge systems in a transparent fashion.

It has received significant attention in the science-policy-practice community, and piloting is going on in communities as well as being tested in dialogues and processes where a diversity of knowledge systems are meeting based on equity and reciprocity. 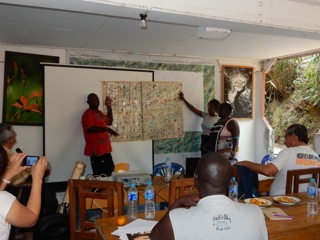 As part of the work on the Multiple Evidence Base, centre researchers Pernilla Malmer and Maria Tengö met representatives from five indigenous organizations  in the community of Hin-lad-nai in Chiang Rai, northern Thailand to share their experiences. Hin-lad-nai is one of the communities that have volunteered to participate as part of the pilot scheme.

The team will also work with communities in Kenya, Ethiopia, Panama and Philippines focusing on biodiversity, culture and food.

New tools and platforms
Claudia Ituarte, also from Swedbio and a contributing author of an IPBES assessment on how to assess diverse conceptualization of values of nature and its benefits, is part of an IPBES expert group on policy support tools and methodologies. It looks at ways IPBES can contribute to desired outcomes for people and nature in relation to biodiversity and ecosystem services.

As part of the work the group will establish an online catalogue of relevant policy support tools and methodologies.

During the meeting in Kuala Lumpur, IPBES also hosted a two-day stakeholder meeting where indigenous peoples and local communities connected with other stakeholders such as environment organizations, scientific networks, businesses and UN bodies.

This year the two-days were organized by IUCN and Future Earth and facilitated by Owen Gaffney from the Stockholm Resilience Centre and Australian researcher Simone Maynard.

"What IPBES is attempting to do has not been done before on this scale. It is breaking new ground, so of course it is difficult. Building trust among these diverse groups is critically important and these stakeholder days create the right forum for dialogue.

One of the biggest recent developments for stakeholders was the launch of a the UNDP hosted Biodiversity and Ecosystem Services Network, BESNet, an online platform to promote dialogue and capacity building around IPBES. Partly funded by SwedBio, BESNet will faciliate ‘Trialogues‘, or face-to-face capacity building dialogues between scientists, policy makers and practitioners.