Rural scene from the Eastern Cape Province of South Africa. A new study has looked at how certain ecosystem services are used by households in different parts of South Africa. This way they can identify distinct social-ecological systems. Photo: M. Hamann

Ecosystem service use in South Africa

Living in a loop

Use of ecosystem services more determined by income, gender and land tenure than physical access

Mapping ecosystem services has become common practice but mapping the complex interactions between humans and nature still remains a challenge. However, it is crucial to understand human well-being, resource use and development.

In an article recently published in Global Environmental Change, Centre PhD student Maike Hamann together with colleagues Oonsie Biggs and Belinda Reyers, have looked at how certain ecosystem services are used by households in different parts of South Africa. This way they can identify distinct social-ecological systems.

They found that households in areas of high direct ecosystem service use are characterised by lower average household income and population density, often headed by females or located in communal areas. High levels of direct use tend to occur in the eastern parts of the country with a more mixed pattern visible in the rest of South Africa.

Based on the level of use, they were able to identify three different system types: A ‘green-loop’ system with a high level of direct use and a ‘red-loop’ system representing the very opposite. In between these two was the ‘transition’ system.

"This pattern not only shows how the average use of ecosystem services among households differs, it shows how people relate to the environment in totally different ways"

Create policies to reconnect
Further examination of the green and the red loop systems reveals several distinct characteristics. Households within the green loop are typically in communities with limited access to market economies but with strong ties to nature.

As communities become richer and more urban, they tend to disconnect from the local environment they depend on and cover their needs by buying the ecosystem services or even substitutes such as electricity instead of firewood to cook.

However, while the direct use of locally sourced ecosystem services in red-loop communities may be low, the total use may be high. This is because resources are largely extracted from areas distant from where they are consumed.

Maike Hamann believes this knowledge is essential in tailoring policies to manage particular resource use.

By identifying the location of red-loop and green-loop systems in South Africa, Hamann and her colleagues believe that policies can be better targeted and address particular challenges in particular areas.

"Different challenges demand different policy interventions. In green-loop areas the primary focus might be supporting growth and access to markets to reduce vulnerability of the most marginalised, while in red-loop areas policies could focus on reconnecting people to their local environment," says Hamann. 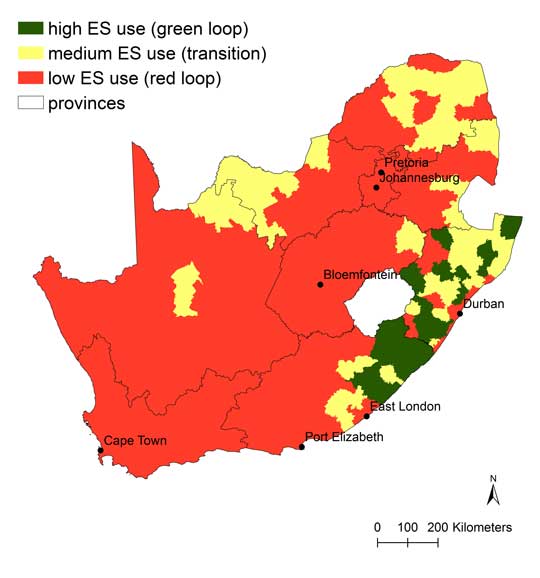 Maike Hamann is a PhD student. She is exploring the links between ecosystem services and human well-being in the Eastern Cape Province of South Africa. Her work is part of a programme on the 'Governance of ecosystem services under scenarios of change in southern and eastern Africa', led by the Stockholm Resilience Centre and funded by the Swedish International Development Agency (SIDA).

Reinette (Oonsie) Biggs is a Society in Science Fellow funded by the Branco Weiss foundation. Her research focuses on regime shifts — large, abrupt, long-lasting changes in the dynamics of coupled social-ecological systems that can have dramatic impacts on human economies and societies.