A new book co-written by Centre PhD student Jamila Haider blends beautiful pictures with essays about biocultural diversity and the cultural and natural history of the remote and isolated Pamir mountains of Afghanistan and Tajikistan. Photo: J. Quax (www.judithquax.com/)

Telling a story of resilience in practice: new book about food and life in the Pamir mountains of Afghanistan and Tajikistan

It all started in the autumn of 2009 when a grandmother in the village of Mun in the Ghund valley of the Tajik Pamir Mountains, approached Centre PhD student Jamila Haider and her colleague Frederik van Oudenhoven asking them to write down her old recipes.

"I want to share them with my children and grandchildren while I still remember," she said.

The grandmother’s recipes came out as stories shared with Haider and Van Oudenhoven, and she was joined by many more grandmothers, grandfathers, children, teachers and farmers.

Conversations about the recipes became a conversation about age-old traditions in the Pamir Mountains and the rapid changes that are now happening in the region. In a unique book called With our own hands: A celebration of food and life in the Pamir Mountains of Afghanistan and Tajikistan, Haider and van Oudenhoven mix essays about biocultural diversity and the cultural and natural history of this remote and isolated place with recipes and stories of the lives, struggles and celebrations of the people in the Pamirs.

The book is written in three languages in parallel – English as well as Dari and Tajik, the forms of Persian spoken in Afghanistan and Tajikistan respectively. 1800 copies of the book will return to the Pamirs, to be distributed to every village, school and common kitchen.

"It has been an amazing and inspiring journey, learning about the lives of so many people and their landscapes through the lens of cooking, sharing and talking about food"

A tremendous biocultural history
The book shows how food can become a powerfool tool for revival in a context where poverty, conflicts and political upheaval have made it difficult for people to express and define their identity.

"The photos, recipes, stories and essays in our book show the tremendous biocultural history of the Pamirs, and together they hint at an alternative narrative of development," says Haider.

"The importance of this knowledge and these traditional practices, and the role they play in maintaining diversity and future resilience of the global food system is dangerously under-recognised."

Centre science director Carl Folke is also full of praise for the book.

"This beautiful book highlights the critical role of the people of the Pamirs as custodians of their food, seeds and traditions. In a supremely challenging landscape, they guard the origins and diversity of many of the foods that are now found on fields and dinner tables around the world. We are introduced to an inspiring but fragile example of the interdependence between people and their environment, and the beauty and dignity that can arise from it," he says.

The book is officially released in June 2015, but can be pre-ordered here. 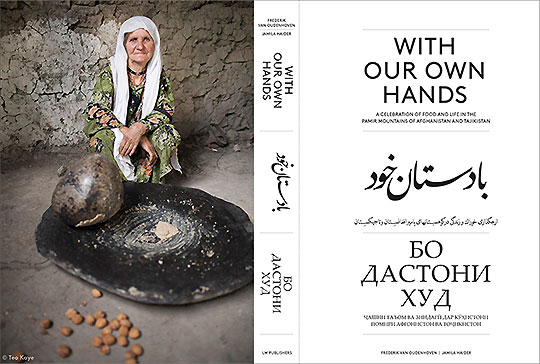 In her research, Jamila Haider focuses on poverty traps in agricultural landscapes. Poverty traps are self-reinforcing situations in which poverty persists at multiple interacting scales.

In the video below, Haider explains how such traps have affected agricultural areas in Tajikistan and Afghanistan.

ABOUT THE CENTRE AUTHOR

Jamila Haider is a PhD student at the Stockholm Resilience Centre working to better understand the relationship between agricultural biodiversity and persistent poverty and sources of resilience in biocultural landscapes. Jamila’s research is driven in a large part by her experience working as an international development practitioner with the Aga Khan Foundation in Tajikistan and Afghanistan, and the real and urgent need to uncover endogenous development pathways.

Her book book With our own hands: A celebration of food and life in the Pamir Mountains of Afghanistan and Tajikistan is officially released in June 2015, but can be pre-ordered here.