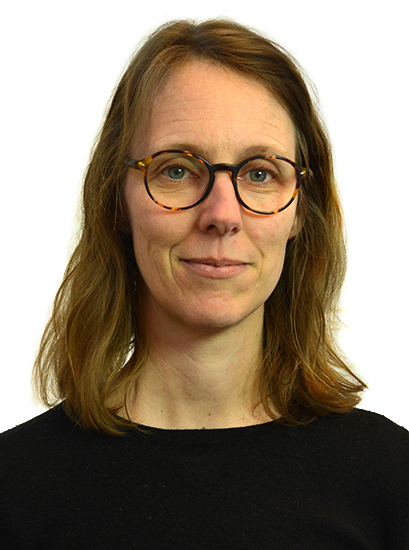 Miriam Huitric's research focuses on transdisciplinary approaches to understanding social-ecological systems. She is director of studies for Bachelor and Master’s level courses, as well as other trainings run at the SRC

Huitric works intensively on education activities at SRC, and has done so since its inception. She was part of the team that planned and structured the Master’s programme Social-Ecological Resilience for Sustainable Development (SERSD), and is director of the programme. Her work here involves overseeing the programme's content and progression, following students during their time here, as well as teaching course modules.

In 2017, Huitric took on two new roles related to education and training: the role of director of studies for Bachelor’s and Master’s level studies, and co-ordination of training and capacity building components at SRC.

Huitric’s current research has built on her experience in transdisciplinary approaches to understanding social-ecological systems. For example, Huitric worked with the Arctic Resilience Report co-ordinating the collection and analysis of case studies for the report together with her colleagues Juan Rocha and Garry Peterson. Looking at changes that are impacting livelihood in each case, the cases could be studied from a social-ecological resilience perspective, to understand what factors were behind cases that displayed resilience, loss of resilience or transformation.

Huitric began her academic career at the Department of Systems Ecology at Stockholm University where she wrote her doctoral thesis. Her research focused on the mis-matches between institutions and the ecosystems they attend to, using the shrimp farming industry in Thailand and the lobster and conch fisheries in Belize as examples.

Her findings demonstrated that even severe changes in a resource and/or its environment can have limited impact on the institutions governing its use. Furthermore, while many expect a well-structured and successful social system related to resource use to respond to changes in the system they depend on, this is not necessarily the case. It is not possible to study the social or ecological system in isolation if one wants to understand the dynamics between resource users and their resource base. The social-ecological system needs to be the point of departure.

Huitric has also taken part in policy-science processes at the SRC, such as co-ordinating and editing the background report for the scientific workshop Biodiversity, Ecosystem Services and Governance – Targets Beyond 2010 , in preparation for the EU high level meeting in to revise the Strategic Plan of the Convention on Biological Diversity, and in particular the development of new biodiversity visions and targets following the evaluation of the 2010 Biodiversity Target.

On completion of her doctoral thesis, she spent a year with the Albaeco and enjoyed taking part in various projects that Albaeco have been engaged in, including its very successful exhibition Manna — Food in a New Light.

Publication review This chapter is part of a book which is organized into four major parts. Part 1 gives the theoretical framework from an ecological, economic and political perspectives. Part 2 explores how internationally traded biophysical commodities from agriculture, forestry and fisheries translates into a virtual flow of land, freshwater, and marine ecosystems. Part 3 describes how two widely used accounting tools (i.e...

Biodiversity, Ecosystem Services and Resilience — Governance for a Future with Global Changes

Publication review This report is a scientific background report intended to support deliberations at the high level meeting “Visions for Biodiversity Beyond 2010 - People, Ecosystem Services and the Climate Crisis" in Strömstad, 7-9 September, during the Swedish EU Presidency. It calls for a better management of the dynamics between social-ecological systems. - Halting biodiversity loss and sustaining ecosystem services for...

See all publications with Huitric, Miriam