The Arctic Resilience Report identifies 19 tipping points that can and have occurred in Arctic marine, freshwater and terrestrial ecosystems. It calls for increased work to support and empower local communities. Photo: S-E. Arndt/Azote

The signs of change are everywhere in the Arctic: Temperatures nearly 20°C above the seasonal average are being registered over the Arctic Ocean. Summer sea-ice cover has hit new record lows several times in the past decade. Infrastructure built on permafrost is sinking as the ground thaws underneath.

Yet those are only snapshots of a much larger trend.

The Arctic Resilience Report shows that Arctic ecosystems are fundamentally threatened by climate change and other impacts of human activities. It identifies 19 tipping points (or “regime shifts”) that can and have occurred in Arctic marine, freshwater and terrestrial ecosystems.

These regime shifts affect the stability of the climate and landscape, plant and animal species’ ability to survive, and Indigenous Peoples’ subsistence and ways of life.

Support and empower local communities
The Arctic Resilience Report, produced by an international team of researchers under the auspices of the Arctic Council, highlights the need to enhance cooperation, both to tackle the drivers of Arctic change, and to build resilience among Arctic people.

“The findings of this report are foundational to a more informed, coordinated approach to building resilience across the Arctic region, a primary responsibility of the Arctic Council”

Joel Clement, co-chair of the Arctic Resilience Report project and Director of the Office of Policy Analysis at the U.S. Department of the Interior

The report finds that policies and actions of Arctic countries’ governments have sometimes hurt resilience, which calls for increased work to support and empower local communities.

"The resilience of Arctic social-ecological systems depends not only on the commitment and imagination of Arctic people, but on the support provided by Arctic countries’ governments, non-governmental organizations, industry and others," it concludes.

"Ultimately, realizing resilience in the Arctic will depend on empowering the people of the North to self-organize, define challenges in their own terms, and find their own solutions, knowing that they have the flexibility and external support to implement their plans." 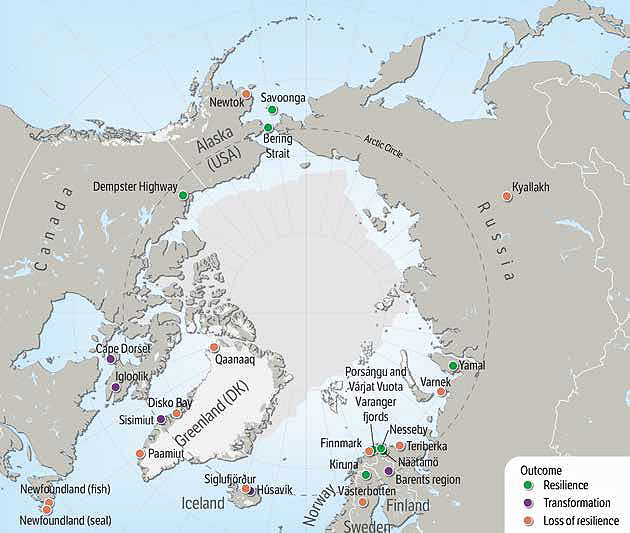 Responding to Arctic change: a selection of 25 case studies from across the Arctic were analysed for this report. The cases illustrate both loss of resilience and resilience, including instances of transformational change. Illustration: H. Ahlenius/Nordpil Read more about the 25 case studies here

Five-year scientific work
The Arctic Resilience Report is the culmination of a five-year scientific effort to better understand the nature of Arctic change, including critical tipping points. It also examines the factors that support resilience, and the kinds of choices that strengthen adaptive capacity.

"This ground-breaking report, based on direct evidence from case studies across the circumpolar Arctic, is an unprecedented effort to gain insight from what is happening on the ground in the region’s social-ecological systems," said Joel Clement, co-chair of the project and the Director of the Office of Policy Analysis at the U.S. Department of the Interior, which is deeply involved in Arctic issues.

The report builds on a large and growing body of research on environmental change in the Arctic, but adds substantial new insights by drawing on resilience science to integrate social and ecological perspectives.

“This integration is novel, as is the focus on how Arctic people, Arctic nations, and the Arctic Council can navigate the turbulent and surprising changes that are happening,” said centre researcher Garry Peterson. He co-edited the report with Marcus Carson, of the Stockholm Environment Institute.

"One of the study’s most important findings is that not only are regime shifts occurring, but there is a real risk that one regime shift could trigger others, or simultaneous regime shifts could have unexpected effects,” said Johan L. Kuylenstierna, executive director of the Stockholm Environment Institute.

Regime shifts poorly understood
Johan Rockström, executive director of the Stockholm Resilience Centre and co-chair of the project, added: “How regime shifts interact with one another is poorly understood. If multiple regime shifts reinforce each other, the results could be potentially catastrophic. The variety of effects that we could see means that Arctic people and policies must prepare for surprise. We also expect that some of those changes will destabilize the regional and global climate, with potentially major impacts.”

The study also examines how Arctic people are adapting to change. It finds multiple examples of communities that have lost their livelihoods and are struggling to survive or maintain their cultural identity.

“Climate change is severely stressing Arctic livelihoods and people, and the extent to which Arctic people can build resilience to these stresses is quite limited,” said centre researcher Miriam Hultric, a lead author of the report.

“Without rapid action to slow climate change by reducing greenhouse gas emissions, the resilience of the Arctic will be overwhelmed.”

Several examples of resilient communities
Still, the report highlights several examples of resilient Arctic communities that have maintained traditional whaling, reindeer herding and other practices despite external shocks. Others have transformed themselves: from nomadic hunters to internationally recognized artists in Cape Dorset, Nunavut, Canada, for instance, and from fishing to whale-watching tours in Húsavík, Iceland.

The single most important factor in resilience, the analysis shows, is the ability to self-organize and respond to challenges as a community.

“For those of us in the policy arena, this provides an important reminder that empowerment and training for Northern communities is paramount for addressing resilience in the region,” said Clement.

Other key factors for resilience are the ability to draw on diverse knowledge sources, including local traditions as well as science; having diversity (e.g. in livelihoods); and being able to navigate change and uncertainty.

The role of the Arctic Council
The study also examines the role of the Arctic Council in building resilience, which is complex not least because diverse Arctic actors define their interests and goals in the region in very different ways: Some see it as a home, others as a source of minerals and other resources, others mostly for its role as a key part of a global system of climate regulation.

The Arctic Council has been effective at fostering cooperation in a variety of important ways; now it just needs to enhance its efforts, the report finds.

Annika Nilsson, Research Fellow at SEI and a lead author of the report, said, “To ensure that we enhance resilience rather than undermine it when making policy choices, it is important to monitor the status of different elements of resilience.”

“We see quite a range of activities under way in the Arctic that contribute to building resilience,” said Carson.

“That means we don’t need to start from scratch – we can fill in the gaps where they exist, replicate local efforts that are proving effective, and scale up.”