Profits from a boom in brackish-water aquaculture are primarily going to groups of external investors and do not significantly improve the wellbeing of the local community around Sundarbans, a biosphere reserve in eastern India. Photo: S. Giri.

• Shrimp aquaculture can adverse effects on environment and livelihoods

WHO BENEFITS? Around Sundarbans, a biosphere reserve in eastern India, more and more farmland is converted into brackish-water aquaculture – despite its risk for detrimental effects on environment and local livelihoods.

“The emergence and rapid expansion of brackish-water aquaculture in Sundarbans threatens to cause long-term consequences such as loss of biodiversity and socioeconomic impacts,” says centre researcher Tim Daw.

He is one of the authors behind a study recently published in Ambio.

Local communities do not benefit

What drives this land change has earlier been disputed. The Ambio study points to economic profitability as the main reason for the conversion.

But even environmental reasons play a role as agricultural productivity has dropped due to salinisation, frequent cyclones, flooding and a diminishing availability of freshwater for irrigation.

At the core of the study are interviews with 67 aquaculture farmers in the region.

“Profits are primarily going to groups of external investors and do not significantly improve the wellbeing of the local community”, says Max Troell, another centre researcher and author on the study. 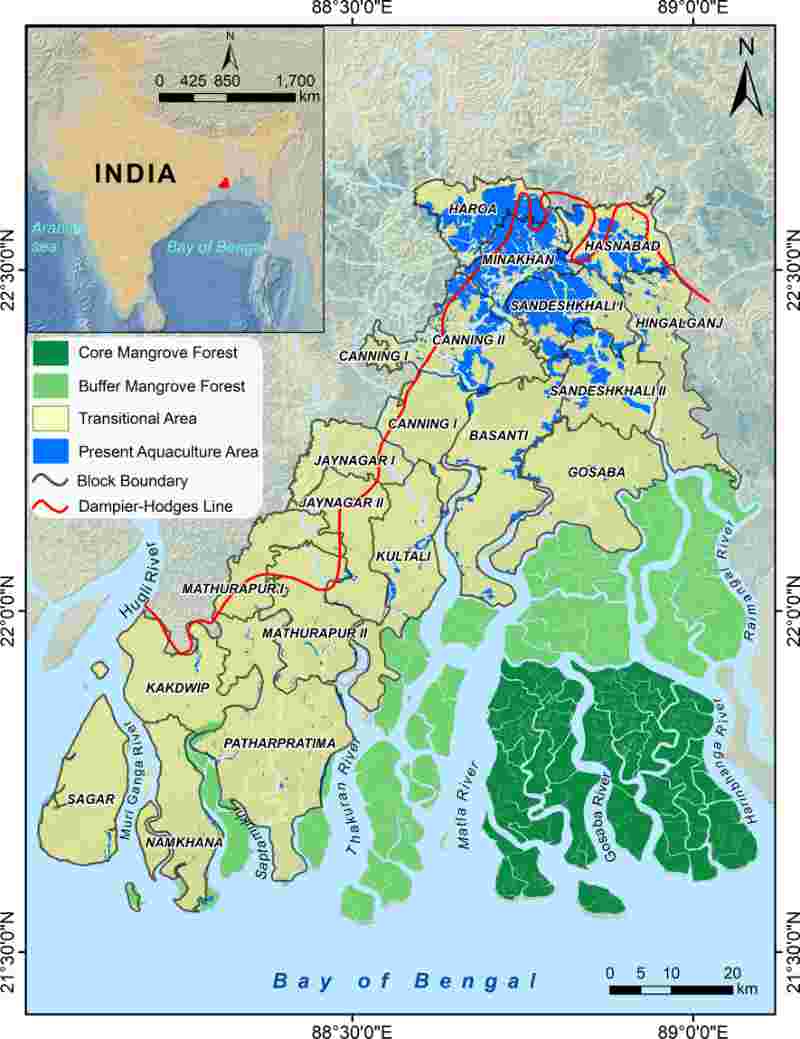 Map showing the present study area. In the core area no human activities are allowed except research with the prior permission of the forest department. In the buffer zone, fishing and honey collection are allowed with permits from the forest department. All kinds of human activities are allowed in the transition zone only. Dampier-Hodges line which is indicated here is an imaginary line drawn in 1829–1830 to mark the northern boundary of saline influence in the Sundarbans delta. Map taken from scientific article.

The produced shrimps are exported and large part of the financial profits is accumulated elsewhere outside the communities. Furthermore, shrinking farmland available for the production of staple food crops, local food security is jeopardized.

Even environmentally, aquaculture has many detrimental effects.

As it is practiced locally with brackish water, it can cause soil salinisation and degrade land that then cannot be turned back into farmland. Furthermore, more intensive aquaculture systems require chemicals such as fertilizers which can leach and harm close-by ecosystems.

But problematic practices are common even in traditional systems. They rely largely on the collection of wild-caught juvenile shrimps which are then kept in ponds until they are fully grown.

This results in a lot of bycatch and risks depleting the regions biodiversity.

The ongoing salinization is part of larger changes in freshwater dynamics and pose challenges for adaptation. Brackish-water farming is one way to adapt but it needs to consider the sustainability in a much broader way.

How to move forward

Since neither traditional nor modern intensive systems of aquaculture bring sustainability to the region, the authors suggest a middle-way which can provide more income to farmers but does not come with the adverse effects of intensive cultivation.

In these improved-traditional systems, which are already practiced by some farmers that participated in the study, seasonal ponds are stocked with bought prawn seeds which are not wild-caught.

Additionally, the researchers give the following suggestions for supporting sustainability in the region:

• Create alternative livelihoods for those people, many of them women, who are currently depending on collecting wild juvenile shrimps.

Read Economic incentives drive the conversion of agriculture to aquaculture in the Indian Sundarbans: Livelihood and environmental implications of different aquaculture types