Amid drought, trees’ ability to store water defines their resilience

A new study has looked at how trees in the rainforests surrounding the Amazon River in South America and the Congo River in Africa respond to drought. Pictured is the Yangambi rainforest in Congo. Photo: CIFOR/Flickr

SAVE IT FOR A DRY DAY: It is well-known that tropical rainforest can switch relatively abruptly from a closed canopy forest to an open savannah due to a combination of logging and climate-induced water-stress. This is problematic because rainforests support much more biodiversity, contribute considerably to the water cycle through transpiration and play a much greater role in storing carbon dioxide than savannah ecosystems.

Understanding the resilience of rainforest trees to drought is key in forest management and conservation efforts.

Rainforests in South America and Africa

Now, a new study has looked into one important aspect of this: the trees’ ability to increase the amount of moisture that can be stored in their root systems.

“Ignoring this ability can underestimate the resilience of the forest ecosystems,” explains centre researcher Chandrakant Singh, first author of a new study published in the journal Global Change Biology.

In addition to Singh, the author list also includes centre researchers Lan Wang-Erlandsson and Ingo Fetzer. The study was done in collaboration with the Bolin Centre for Climate Research at Stockholm University, the Delft University of Technology and Utrecht University.

It focused on tropical rainforests in South America and Africa for the period 2000-2019. The forests surround the Amazon River in South America and the Congo River in Africa and are the two largest rainforest ecosystems in the world. They both play huge roles by storing carbon, hosting biodiversity and recycling moisture, as well as supporting human well-being at local, national and international levels.

The study found that the tropical terrestrial ecosystems were in general more resilient when tree cover was either high (>75%) or low (<10%) due to their capacity to invest in subsoil storage. In contrast, ecosystems at intermediate tree cover (30-60%) had already maximised their root moisture storage, and hence less resilient to droughts.

Though previous studies also hypothesised a similar trend using a space-for-time assumption. This study provides temporal evidence that the ecosystem change leading to a regime shift—in the context of both tree cover loss and gain—is indeed intensified at intermediate tree cover. This improved representation of ecosystem resilience can play a crucial role in management and conservation efforts of these globally important tropical rainforests.

Considering root zone storage capacity along with mean precipitation allowed the researchers to evaluate the invisible buffering responses of forest ecosystems. This is critical to the stability of the forest ecosystems, says Singh. 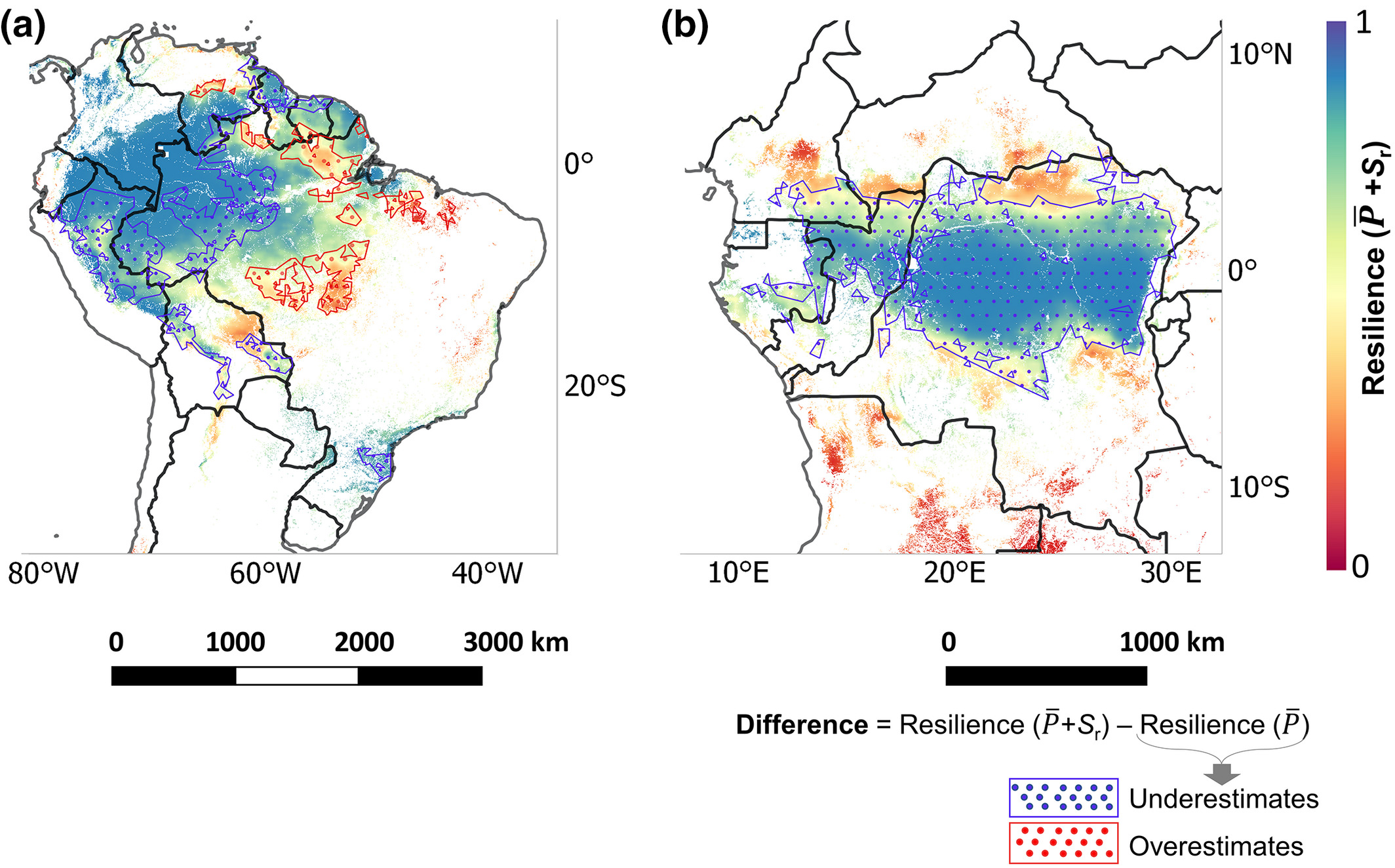 The study’s resilience calculations for (a) the Amazon and (b) Congo rainforest. (From ‘1’= highest, to ‘0’=lowest resilience). Considering only P (mean precipitation) and not Sr (root zone storage capacity) reveals that the resilience was underestimated in large areas of the rainforests.