New models reveal an even greater weakening of the ocean’s capacity to act as a carbon sink compared with models with simpler dynamics. Photo: J. Jost/Unsplash

ONLY SCRATCHING THE SURFACE: The world’s oceans are a massive carbon sink, absorbing around a quarter of all human-driven carbon dioxide emissions.

With warmer water able to hold less dissolved carbon dioxide, increasing global temperatures are expected to gradually weaken the ocean’s ability to take in carbon from the atmosphere.

But carbon solubility is not the only factor at play. Biological activity also plays an important role, moving carbon away from the surface towards deeper layers of the ocean as organic matter sinks through the water.

However, most Earth system models, including those used by the Intergovernmental Panel on Climate Change (IPCC) to make future projections, do not fully account for how this so-called “biological pump” will respond to climate change and impact the ability of the ocean to act as a carbon sink.

To address this gap, a new paper in Earth System Dynamics led by David Armstrong McKay, with Sarah Cornell, Johan Rockstrom from the Stockholm Resilience Centre, and Katherine Richardson from the University of Copenhagen, incorporated temperature-sensitive recycling of carbon and nutrients by microbes and multiple sizes of plankton into an existing model of the ocean carbon cycle.

By better accounting for these ecological dynamics , there is an even greater weakening of the ocean’s capacity to act as a carbon sink compared with models with simpler dynamics.

Our results clearly demonstrate that by including key ecological processes, Earth system models can better represent the complex feedbacks between ecosystems and the climate.

Warming speeds up the metabolic rates of biological processes like photosynthesis and respiration. However, since respiration increases faster than photosynthesis, this means that organic carbon sinks a shorter distance before being recycled. This increases carbon in the surface ocean and so limits how much more carbon dioxide can dissolve in from the atmosphere. 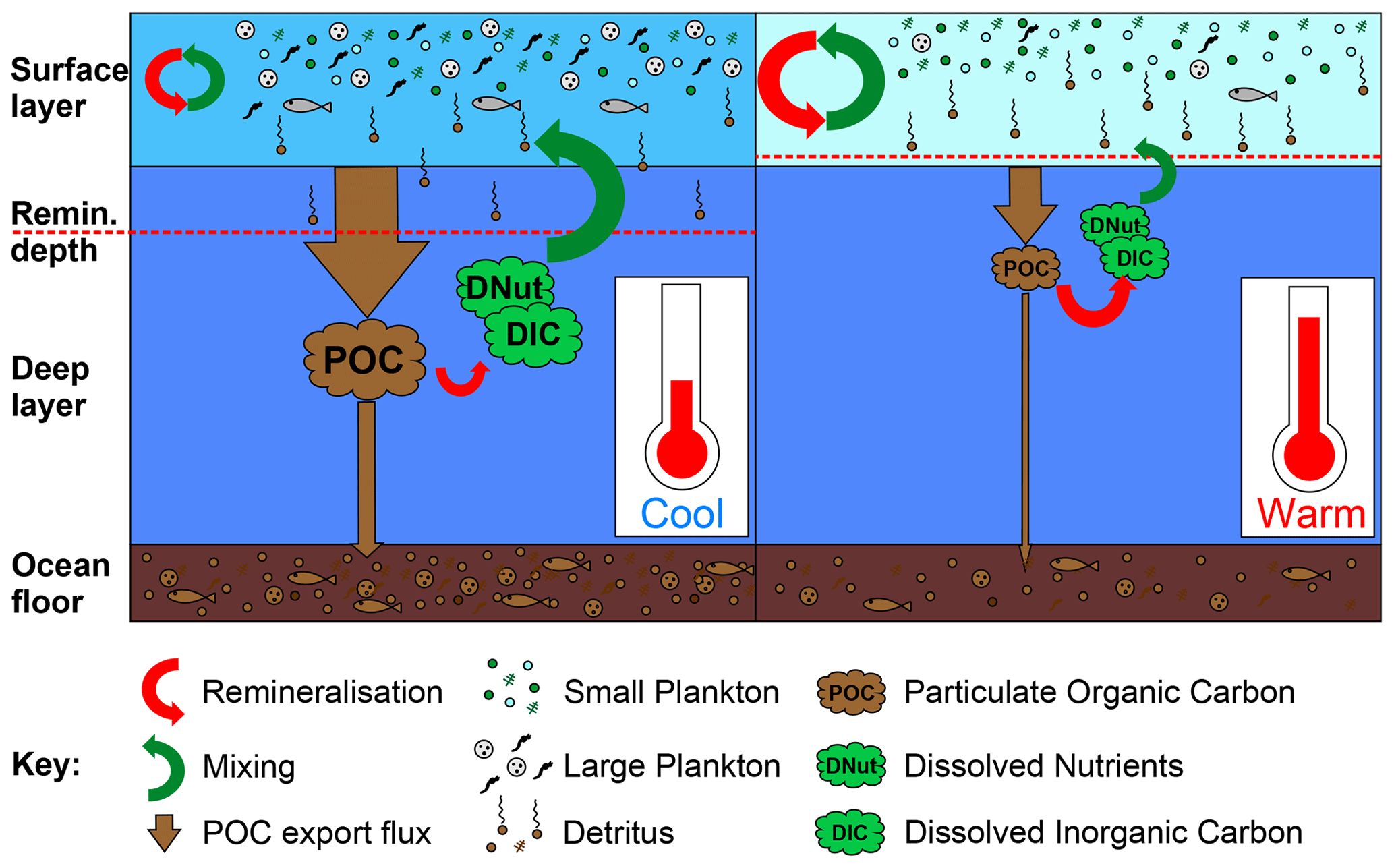 Schematic illustrating the impact of warming on the soft tissue biological pump.

This means that even a small shift in remineralisation depth or ecosystem structure could have a significant impact on atmospheric carbon dioxide, potentially acting as a positive climate feedback mechanism.

“The inclusion of these kinds of ecological responses to climate change in Earth system models is crucial for resolving complex climate feedbacks and projecting the future behaviour of the ocean carbon sink,” say the authors.

In this study researchers use ecoGEnIE, a recently developed version of an ‘Earth system model of intermediate complexity’ (so-called for being simpler than the most complex climate models, but still capable of resolving key dynamics at a fraction of the computational cost) called cGEnIE. EcoGEnIE allows both temperature-dependent remineralisation rates (TDR) and multiple plankton sizes with flexible nutrient stoichiometry (i.e. “trait-based ecology”, ECO).

Activating both enables evaluation of the impact of both ecological dynamics (in particular shifts in plankton size) and temperature-dependent remineralisation on the export of particulate organic carbon (POC) from the surface ocean (the “biological pump”) in response to climate change. We separate out these effects by turning on TDR and ECO both separately and together, and running ecoGEnIE with future emission scenarios (from low [RCP2.6], moderate [RCP4.5], high [RCP6.0], to very high [RCP8.5] emissions based on IPCC AR5) until the year 2500.