In this first published version of the Index, the Baltic Sea as a whole scores 76 out of a possible 100, with 100 being the overall management target. Coastal fish communities score high in the index. Photo: G.T. Unger/Azote

Health check-up shows both better and worse status than expected

"A LIKELY FUTURE": The new assessment tool, the Baltic Health Index (BHI), has now been published in the scientific journal People and Nature.

The index complements existing, more ecological-oriented, approaches by including a human dimension on the status of the Baltic Sea.

It has been calculated by centre researchers in cooperation with a large expert network around the Baltic as well as scientists in California who have established the well-known global Ocean Health Index (OHI). The OHI provides comprehensive, and quantitative assessments of progress towards healthy and sustainable oceans.

The BHI measures progress towards nine key societal ‘goals’ representing the benefits and services people expect from a healthy Baltic Sea. Goals like food provision, carbon storage, biodiversity, tourism and protected areas were chosen to reflect both the needs of humans and ocean sustainability.

By calculating these goals together and scoring them from 0-100, the new BHI assessment can be used by managers and communicated to a wide range of audiences. A clear added value with the index is that it provides a “likely future” state and therefore easily identifies regions or areas of concern.

This is a truly operational tool, any small county around the Baltic can use and adjust it to the local context and follow their management measures all in one.

In this first published version of the Index, the Baltic Sea as a whole scores 76 out of a possible 100, with 100 being the overall management target (see figure below).

However, the assumed reference value for a pristine Baltic Sea would be much higher than 100.

The BHI is an open-science tool and the aim is to release an updated version of it every year to facilitate tracking management progress. Calculations have been guided and overseen by leading Baltic Sea scientists from universities around the Baltic Sea.

Data and existing assessments from HELCOM, ICES, EU and other sources has been used. The Baltic Sea has been subdivided in 42 units, each unit has been assessed with all nine goals and for each unit, current state, trend, pressures, resilience and the likely future status have been calculated.

Results are also scaled to Baltic Sea basins and countries.

Illustration below: The large flowerplot indicates overall BHI score, with petal lengths indicating relative values (0–100) for each goal and subgoal. The lengths of the bars transecting each goal and subgoal petal represent the spatial variability of the score values of the particular goal or subgoal. Small flowerplots indicate basin-specific score and goal values.

Podcast: our oceans are suffering, how can we make them healthy again? 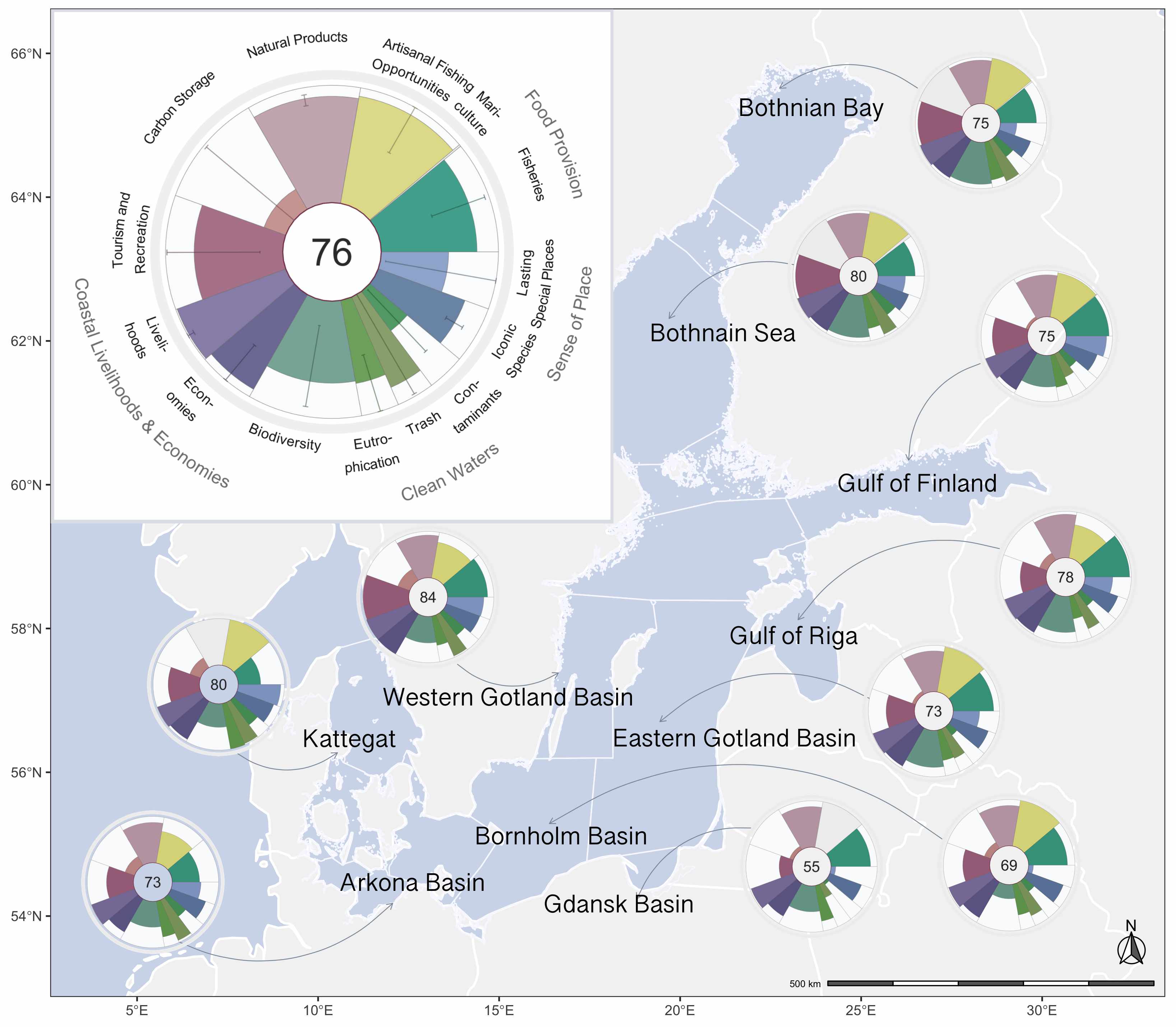