The “Ocean 100”: how a small group of companies dominate ocean economy

According to a study in Science Advances, among the 100 largest companies within the ocean economy, offshore oil and gas companies dominate but wind farms are on the rise. Photo: Rossopgrapher

The 100 largest companies that operate within eight ocean industries took an estimated 60% of all revenues. The next step will be to explore their environmental footprint

For the first time, scientists have identified the 100 transnational corporations (see table below) extracting the majority of revenues from economic use of the world’s ocean.

Dubbed the “Ocean 100”, the group of companies generated US$1.1 trillion in revenues in 2018, according to the research published in the journal Science Advances.

If the Ocean 100 was a country it would be the 16th largest on Earth.

Combined these industries had revenues of $1.9 trillion in 2018, the most recent year analysed.

According to the study, the 100 largest companies took an estimated 60% of all revenues in these eight industries.

The Ocean 100 list is dominated by offshore oil and gas companies with a combined revenue of $830 billion. The only non-oil and gas company in the top ten is the shipping company A.P. Møller–Mærsk at No. 9. 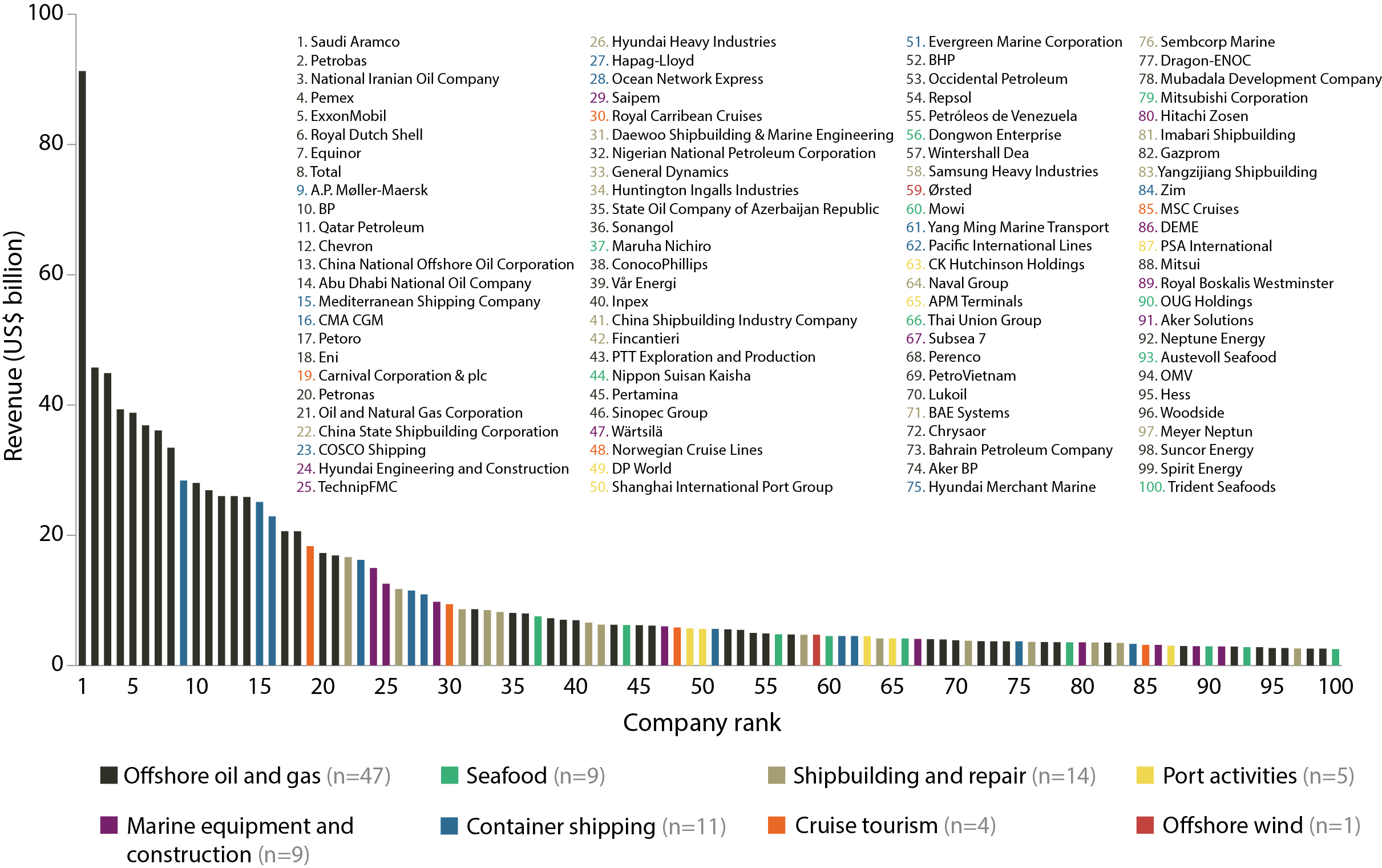 The researchers found a consistent pattern across all eight industries. A a small number of companies account for the bulk of revenues. On average, the 10 largest companies in each industry took 45 percent of that industry’s total revenue. The highest concentrations were found in cruise tourism (93 percent), container shipping (85 percent) and port activities (82 percent).

“Now that we know who has the biggest impact on the ocean this can help improve transparency relating to sustainability and ocean stewardship,” said lead author John Virdin from Duke University.

“Why do such a small number of companies dominate this sector? This likely reflects high barriers to entry in the ocean economy. A lot of expertise and capital are needed to operate in the sea, both for the established industries and emerging one such as deep-sea mining and marine biotechnology,” said Virdin.

Wind farms on the rise

The authors say that such high concentration is a risk to international goals for sustainable ocean use, but possibly also an opportunity. One risk is that a small number of companies headquartered in a few countries (by revenue, the largest companies are based in the United States, China, Saudi Arabia, France, the United Kingdom and Norway) could more easily lobby governments to weaken social or environmental rules for example to limit greenhouse gas emissions or stifle innovation.

Conversely, with just a small number of companies it may be easier to coordinate action for ocean stewardship and harness private funding to support globally-agreed public initiatives in the ocean (e.g. ocean clean-ups, conservation, support for small-scale fishing communities).

One surprise in the study is the scale of offshore wind farms. This is now becoming a major sector in the ocean economy worth $37 billion in 2018 - and growing rapidly.

“Since 2000, the capacity of offshore wind farms has seen a staggering 400-fold increase and this is expected to accelerate further as demand for renewable energy grows,” said Jean Baptiste Jouffray, a co-author of the study from the Stockholm Resilience Centre.

Rethink Talks podcast: What it takes to make science and business connect

In this episode Lisen Schultz, deputy director of transdisciplinarity at the Stockholm Resilience Centre (SRC), talks to SRC’s science director Henrik Österblom and Darian McBain, director for corporate affairs and sustainability at Thai Union, the world’s largest canned tuna producer. Together they will share thoughts and experiences on how it is working together to make the world’s largest seafood companies more sustainable.