Based on analyses of satellite data and computer modelling, a new study published in Environmental Research Letters shows how more severe dry seasons in turn cause more forest loss, releasing carbon to the atmosphere. Photo: B. Flores

A VICIOUS CYCLE: For the first time, scientists have estimated how much deforestation of the Amazon has contributed to the increasing severity of dry seasons in Brazil, Peru and Bolivia, and how this leads to greater forest loss.

Based on analyses of satellite data and computer modelling, the study shows how more severe dry seasons in turn cause more forest loss, releasing carbon to the atmosphere.

Published in the journal Environmental Research Letters, the study is the first time this feedback loop has been explored and quantified.

The effect is still small compared with human-induced climate change but the impact is likely to grow in coming decades as the resilience of the rainforest reduces.

The researchers estimate that about 1-2 per cent of all forest loss in the Amazon is caused by this vicious cycle alone.

Dry seasons in the Amazon have become more intense in recent years leading to greater forest loss as trees die. On average the Amazon rainforest receives about 2.2 meters of rain each year. Much of this water comes sweeping in on winds from the Atlantic Ocean but the forest itself provides a substantial part of rainfall; water evaporates from leaves and blows downwind to fall as rain elsewhere in the forest.

The rain falling in wet seasons helps the forest survive dry seasons as water is readily available in soils and wood making fires less likely. Any changes to rainfall patterns can then affect the Amazon’s resilience and increase the risk of a tipping point.

Indeed, separate research published in Nature (4 March) shows the Amazon carbon sink is declining and the forest risks becoming an emitter of carbon with decades.

Although deforestation rates in the Amazon have been declining substantially over the last two decades, recently they have been on the rise again.

“Until around 2012, Brazil showed that strong policies can control deforestation and forest fires in the Amazon, even during extreme drought. Yet, now lawmakers are undermining these policies. If we want to maintain the Amazon forest resilient, we must restore its governance, which will now require global action,” says Flores. 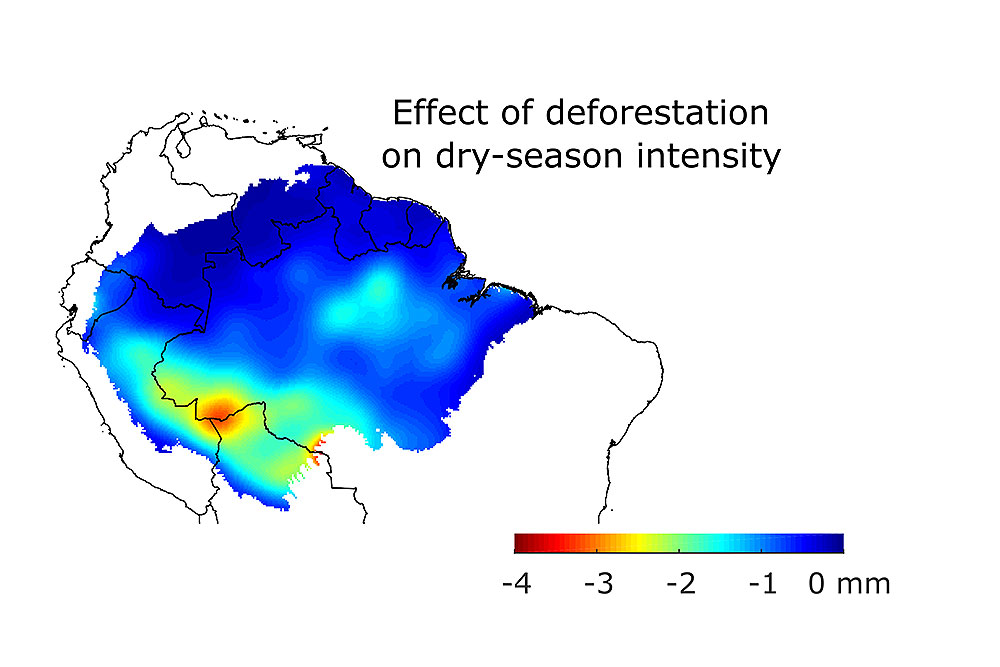 The researchers quantified two causal effects: the effect of drought on deforestation and the effect of deforestation on drought. For the former, they related time series of forest loss and those of dry-season intensity across the Amazon. For the latter, they first used a hydrological model to estimate the effects of 21st century deforestation on evaporation. Next, by simulating the trajectories of moisture through the atmosphere from evaporation to precipitation, they could estimate where reductions in evaporation have affected rainfall levels and intensified the dry season. Using the previously obtained empirical relation between forest loss and dry-season intensity, the researchers could close the cycle and determine how much deforestation is multiplied due to the drought-deforestation feedback.