In a study recently published in PLoS ONE, researchers have “fused” satellite images from multiple sensors easier identify urban heat islands in Tirunelveli, India. Their work revealed an overall increase in surface temperature in the city with several areas in the risk of becoming heat islands. Photo: M. Shamsudeen M

Hot in the city

Removal of vegetation and trees in cities can create areas with exceptionally high temperatures. Better use of satellite imagery can detect such areas quicker

The city of Tirunelveli is a hotspot for business in Southern India. Since the 1980s, the city population has doubled, making it one of the fastest growing cities in the country. But it has also turned it into a hotspot for other reasons. An uncontrolled expansion has had significantly negative effects on land, water and air. The consequence is urban heat islands, or areas that are significantly warmer than its surrounding areas. On a hot, sunny summer day, roof and pavement surface temperatures can be between 27 and 50 degrees warmer than the air, while shaded or moist surfaces—often in more rural surroundings—remain close to air temperatures.

These heat islands have severe consequences for both humans and ecosystems. Avoiding or reducing them is not particularly difficult, smart and energy-efficient construction materials and green roofs are two of the most common solutions, but finding ways to identify the emergence of these islands can be time consuming and expensive due to lack of coherent data.

In a study recently published in PLoS ONE, centre researcher Avit Bhowmik along with colleagues from Universidade Nova de Lisboa in Portugal have “fused” satellite images from multiple sensors that monitor land use change, surface permeability and temperature to easier identify urban heat islands. Their work revealed an overall increase in surface temperature in the city with several areas in the risk of becoming heat islands.

“In fast growing cities like Tirunelveli, urban heat islands can emerge spontaneously through the loss of vegetation and impermeable surfaces,” Avit Bhowmik explains.

This requires detailed and continuous monitoring to detect any areas of risk. The use of remote sensing, and the fusion of multiple satellite data, can help in this work, he argues. The advent of high quality satellite images from multiple sensors for a certain location enables “the fusion” of those images from individual sensors to create a combined image for a given location. 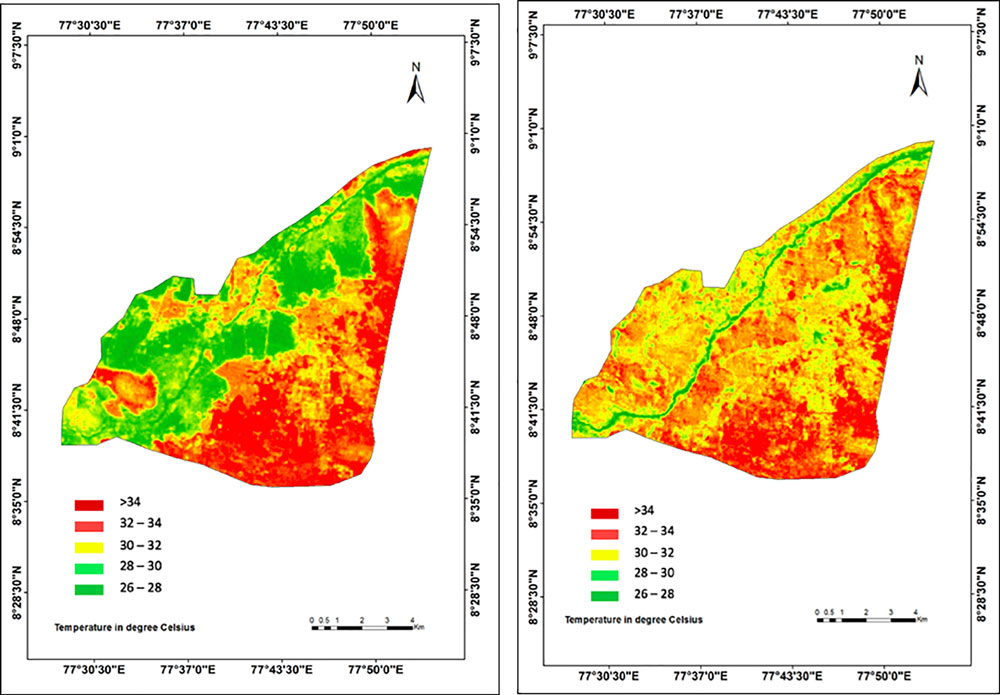 Similar techniques have been used in Egypt, Eritrea, Vietnam and Germany with success. “Such combined images are substantially more detailed than images from individual sensors as they fuse images with diverse spatial and spectral resolutions,” Bhowmik says.

This increases the ability to detect changes that would otherwise go unnoticed from single sensor derived images. By aggregating data from the satellite images Bhowmik and his colleagues have managed to provide important metrics in order to identify and quantify areas prone to urban heat islands.

By combining imagery between 2007 and 2017, the researchers were able to demonstrate how Tirunelveli has undergone significant changes in land use and land cover. Urban built-up areas have increased by 32% while fertile cropland has declined by 59%, mostly turning into real estate plots.

Overall, forest cover and vegetation has substantially decreased parallel to an increase in areas that lack permeable surfaces. This, Bhowmik, says underlines the importance of making sure urban expansion include forests, lakes and the like to preserve surface moisture and prevent high surface temperatures. 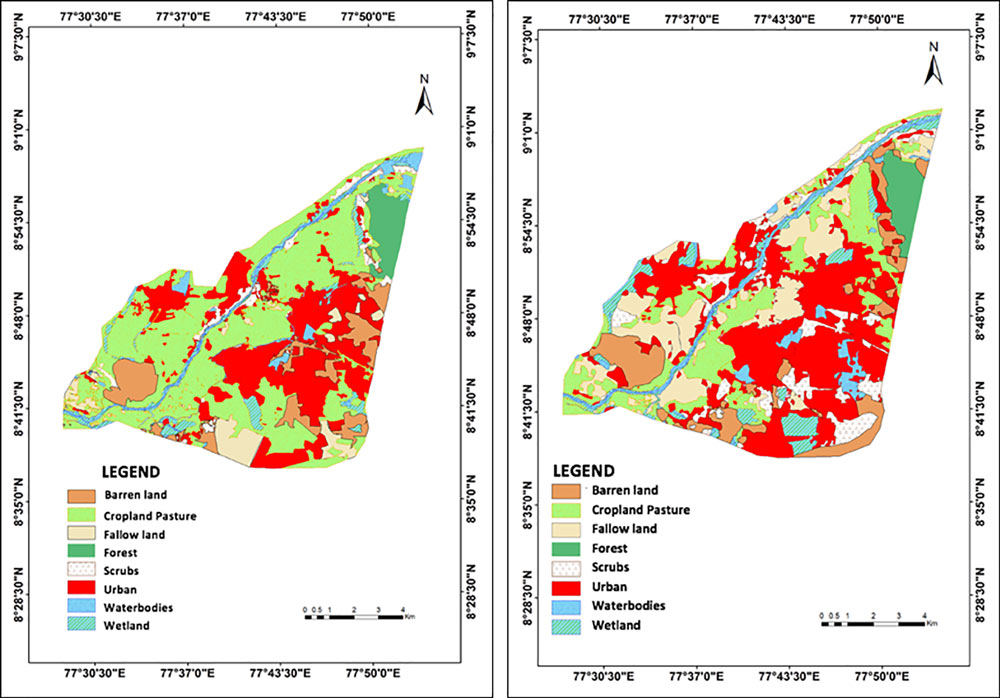 The researchers used Landsat Enhanced Thematic Mapper (ETM+) and Indian Remote Sensing Satellite Resourcesat-1—Linear Imaging Self-Scanning Sensor -3 (IRS LISS-III) images with 30 m and 23.5 m spatial resolutions, respectively, from June 2007 and June 2017. Freely available Landsat satellite data were downloaded from Unites States Geological Survey (USGS) gateway in GeoTiff format. IRS-LISSIII data was purchased from the National Remote Sensing Centre (NRSC), Indian Space Research Organisation (ISRO) in GeoTiff format. We assessed and compared the accuracy of classification between the fused and non-fused images of 2007 and 2017. Cartographic map of 2007 and classified Google Earth images of 2017 (as cartographic map wasn’t available) of the Tirunelveli city obtained from BHUVAN, ISRO India and Google Earth Engine (GEE), respectively, were used as reference images (ground truth) for the accuracy assessment of the classified LULC maps and comparison between the fused and non-fused images. The analysis was limited to daytime imageries due to the unavailability of nighttime imageries. This might affect the accuracy of UHI emergence detection using our SAVI-LST metric. However, since the study was on surface temperature and not air temperature, the variation between daytime and nighttime temperatures is marginal due to nighttime surface radiation.