A new study presents a framework that makes it possible to unpack and define more in detail the many ways in which societies and nature are interdependent. Photo: T. H. Snickars/Azote

The overarching insight that societies and nature are interacting to the extent of being interdependent forms the core of all research at Stockholm Resilience Centre.

Unpack and define
In a new article published in Global Environmental Change, centre researcher Örjan Bodin and Maria Tengö from Department of Systems Ecology at Stockholm University present a framework that makes it possible to unpack and define more in detail the many ways in which societies and nature are interdependent.

The analysis is based on a minimum of two social actors and two ecological resources. These sets of nodes connect in at least 28 different ways. In the model, a social actor may be an individual, a community, an organisation or a state. An ecological resource may be a herd of grazers, a species or a fishing site.

"A real social-ecological system is typically much larger and more complex. However, by extracting all possible combinations of two social and two ecological nodes, we can disentangle some of the inherent complexities between them. Furthermore, the framework allows us to integrate different theories from the social- and the natural sciences", Bodin explains.

To illustrate and assess the applicability of their model, Bodin and Tengö used it to study a small-scale forest governance in an agricultural landscape in southern Madagascar.

The landscape included a village of approximately 9 000 inhabitants and the social actors were identified as the six land-holding clans in the village alongside two other clans residing elsewhere. The social-to-ecological and social-to-social links were assessed for each specific forest patch and clan. This was done through semi-structured interviews with clan authorities and forest managers. The ecological-to-ecological links were identified and assessed based on the potential for seed dispersal among the forest patches. This dispersal is essential for the scattered patches to sustain plant populations over time.  (see image below).

Good relations means good governance
The clans appear to either divide access to patches among each other, or, if a patch is shared, the clans are also socially linked to each other. All these configurations are likely to contribute to the successful resource governance in the area.

"We were able to come up with some hypotheses that could help explain the successful governance of the biodiversity-rich forest patches: the clans are organised in relation to the forest patches so that shared forests are combined with social connectivity. This is a cornerstone of successful common-pool resource management," Maria Tengö explains.

A transdisciplinary platform
For Bodin and Tengö, the importance of their study is to initiate the development of a transdisciplinary framework that makes it possible to disentangle the complex web of social, ecological and social-ecological interdependencies. 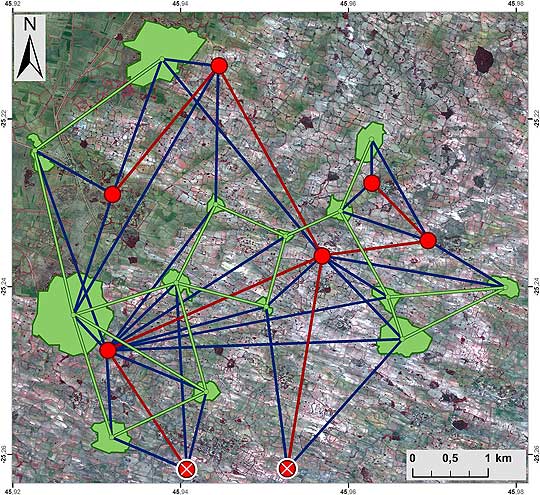 A rural agricultural system in Madagascar described as a social—ecological network. The map shows where the different clans are located in the landscape along with their social relationships (circular nodes and grey links). Each clan is represented as a single settlement. The two nodes with a white cross represent clans without any clearly defined physical location in the landscape. The forest patches and the ecological links are shown as light grey nodes and links (green in the web version).