A new study published in Science Advances predicts that as the oceans warm, fish – which appear to be superior predators in warm water – will extend their ranges away from the equator and cause a decline in the diversity of invertebrates such as crabs, lobsters, sea urchins and whelks. Photo: J. Lokrantz/Azote

As predators extend their range because of warming waters, significant changes will hit marine ecosystems

A new study based on the first global survey of marine life by scuba divers has provided fresh insights into how climate change is affecting the distribution of marine life.

The research published in the journal Science Advances predicts that as the oceans warm, fish – which appear to be superior predators in warm water – will extend their ranges away from the equator and cause a decline in the diversity of invertebrates such as crabs, lobsters, sea urchins and whelks.

Using data collated by the citizen science project Reef Life Survey (RLS), a team from the Institute for Marine and Antarctic Studies (IMAS) found that total number of fishes and large invertebrates seen underwater changes little from the tropics to polar latitudes.

However, fish numbers are very high in the tropics but decline towards colder latitudes, while large invertebrates balance those patterns in the opposite direction.

Predators will affect abundance and diversity

In South Eastern Australia and Tasmania the ‘tropicalisation’ of marine life is already underway, but similar effects have not yet been detected in New Zealand.

"Previous research suggested that climate change would directly affect the range of species due to rising temperatures," Edgar says.

Data collected by RLS divers during the world’s first systematic global survey of marine life show this is not the end of the story, explains co-author and centre researcher Stuart Kininmonth. They found that the local presence and abundance of a species reflect not only its need for particular temperatures and environmental conditions but also its ecological interactions.

As fish extend their range further from the equator with warming water, their advantage as predators will affect the abundance and diversity of large mobile invertebrates. Broad changes will likely spread across the ecosystem, affecting human activities such as fishing

Kininmonth and his colleagues say ongoing monitoring of marine life at both local and regional levels is needed to allow the early detection of such changes. This would allow adaptive fisheries and conservation management and help to minimise the social and economic impacts.

“Species monitoring of shallow reef communities at national scales is only possible with the support of citizen scientists, such as the RLS divers who contributed data to our study,” Kininmonth says.

The RLS data set now includes information on 4000 species in 50 countries, allowing a better understanding of how and why species are distributed, while also providing an early-warning mechanism for climate-induced changes. 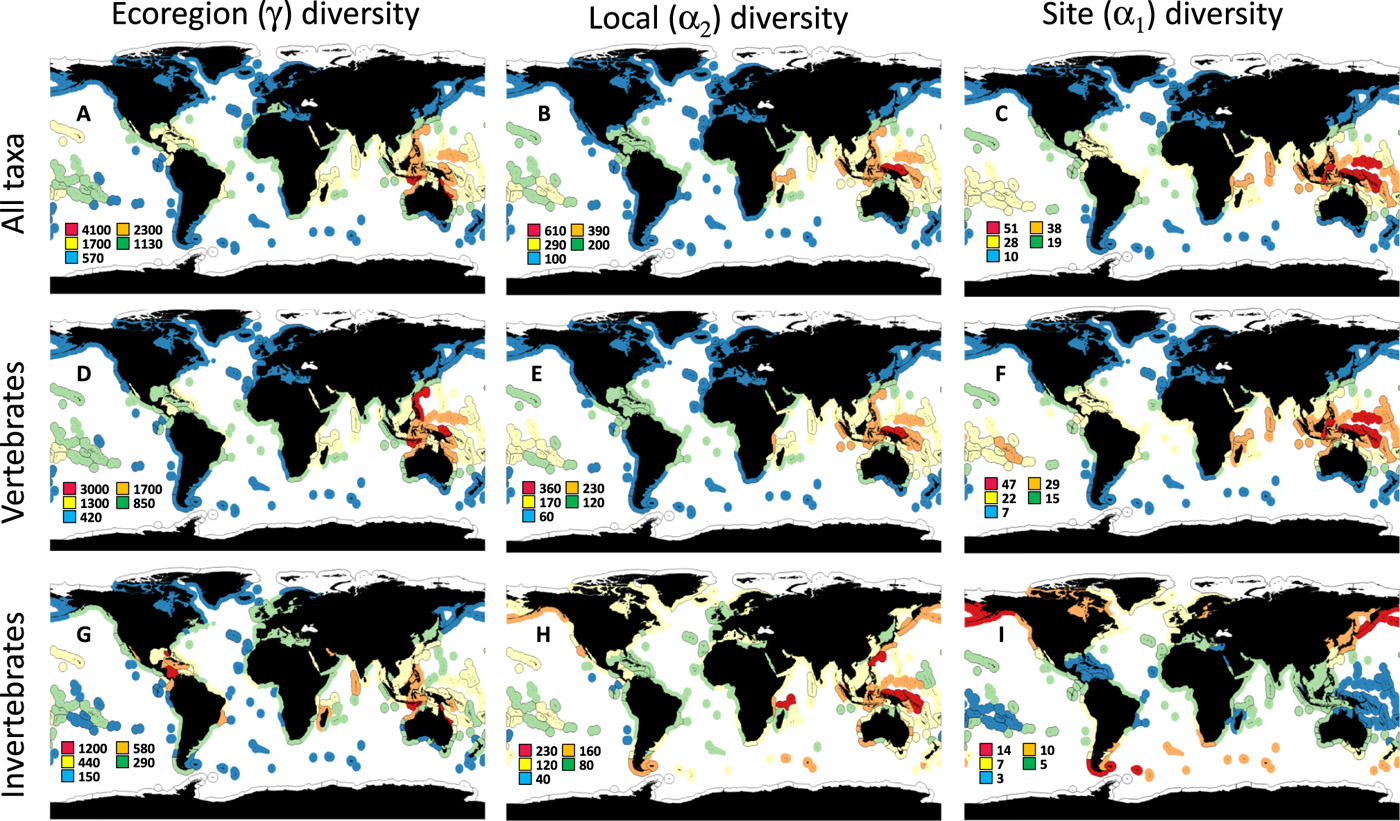 The researchers calculated diversity at three scales for each of the 82 marine ecoregions of the world (of 233 worldwide) by averaging observed species richness per transect within each site and then averaging the mean site richness values per ecoregion (mean observed species density per 50 m2 RLS transect, α1 diversity); by estimating species richness at the local scale (extrapolated asymptotic richness for RLS sites within a 12-km span, α2 diversity); and by estimating the total number of species inhabiting each ecoregion (γ diversity). The latter was calculated using an equivalent approach to capture-mark-recapture, by compiling a list of all shallow reef species recorded in the Ocean Biogeographic Information System (OBIS), FishBase, and SeaLifeBase for each ecoregion and then applying a correction for the proportion of unobserved species by cross-validation with the RLS data for the same families of organisms.