Trees and shrubs in Sahelian landscapes

Densities of trees and shrubs have increased since severe droughts in the 1970s and 1980s but species composition in the landscape has changed, with a risk of ecosystem services losses

Multiple ecosystem services from trees and shrubs in Sahelian landscapes, but knowledge of landscape effects lacking

Regulating ecosystem services, including the effects of trees on crop yield are studied for fewer species. Particularly, studies of landscape effects are lacking. [Sinare & Gordon 2015]

Increasing tree and shrub cover but changing species composition, with a risk of ecosystem service losses

Tree and shrub cover has recovered since the droughts that struck the Sahel in the 1970s and 1980s [Hänke et al 2016; Baggnian et al 2014], which can seem to be in contrast to a dominant degradation and desertification narrative of the region.

Changing management by farmers to maintain sprouting trees and shrubs on their fields has contributed to this increase. However, the species composition in the landscape is changing. An increase in exotic and drought tolerant species at the expense of savannah species that require higher rainfall, and which in many cases are traditional multi-purpose species, has been observed in Burkina Faso [Hänke et al 2016].

In Niger, only a few common species have a sufficiently good rejuvenation on farmers’ fields, and several species are almost absent among younger trees and shrubs [Baggnian et al 2014]. This has impact on the set of ecosystem services generated in the landscapes, where some services are lost. 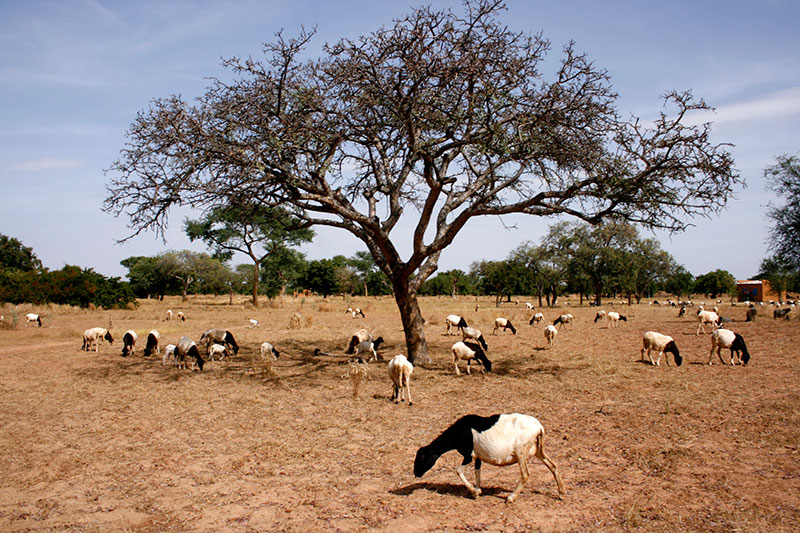 Trees are integrated on fields in Sahelian agricultural landscapes. They provide ecosystem services such as food, fodder, construction materials and firewood, as well as shade for humans and livestock. Here sheep grazing harvest residues in Burkina Faso. Photo K. Malmborg

Hanna Sinare is a postdoctoral researcher for GRAID working with synthesising SRC research on social-ecological systems, ecosystem services, and development in the West African Sahell.

Line Gordon is the deputy director and deputy science director at the Stockholm Resilience Centre. She is also assistant professor at the centre with a focus on freshwater resources, ecosystem services and food production

Elin Enfors Kautsky's research centers on pathways for transformative change towards sustainability, and she also leads a section of the GRAID programme, which focuses on operationalizing resilience thinking in practice.