Somalia have long suffered under a prolonged drought combined with poverty, lack of preparedness and weak government have increased the presence of extremist groups. Photo: AMISOM/Flickr (CC0 1.0)

World leaders are failing to prepare for a new era of complex and often unpredictable risks to peace as profound environmental and security crises converge and intensify, according to a major report by the Stockholm International Peace Research Institute (SIPRI).

The report, Environment of Peace: Security in a New Era of Risk, offers policymakers principles and recommendations for navigating this volatile future.

It provides the most comprehensive account to date of how different aspects of environmental crisis—including climate change, mass extinctions and resource scarcity—are interacting with today’s darkening security horizon and other phenomena such as the fallout of the Covid-19 pandemic.

The environmental and the security crises are one and the same crisis. We will need strong cross-sector collaboration to ensure a just and peaceful transition to more sustainable societies.

How security and climate crises interact

The report paints a vivid picture of the escalating security crisis. For example, it notes that between 2010 and 2020 the number of state-based armed conflicts roughly doubled (to 56), as did the number of conflict deaths.

The number of refugees and other forcibly displaced people also doubled, to 82.4 million.

Regarding the environmental crisis, around a quarter of all species are at risk of extinction, pollinating insects are in rapid decline and soil quality is falling, while exploitation of natural resources such as forests and fish continues at unsustainable levels.

Climate change is making extreme weather events such as storms and heatwaves more common and more intense, reducing the yield of major food crops and increasing the risk of large-scale harvest failures.

The report illustrates some of the complex ways that these two crises are starting to interact around the world; for example:

Environment of Peace cites many examples of initiatives that are building peace and environmental integrity together, which could be scaled up and adapted.

It shows that to be effective, solutions need to be inclusive, with sectors of society that are often marginalized (such as Indigenous Peoples, women and youth) included in decision-making processes and sharing the benefits.

The report sets out five principles to guide policymakers in addressing these issues:

2. Cooperate to survive and thrive. The new era of risk demands a new mode of cooperation to address common threats

3. Expect the unexpected—be prepared to adapt. Continuous horizon scanning, far-sighted analysis and adaptive implementation are needed to keep ahead of unpredictably changing risks

4. Only a just and peaceful transition will succeed. In making the transition to environmentally sustainable societies, we must avoid creating new risks to peace

5. By everyone, for everyone. Decision-making processes from the United Nations down to community projects should include the people most affected.

This is a summary of a news article originally produced by SIPRI. Click here to read full story. 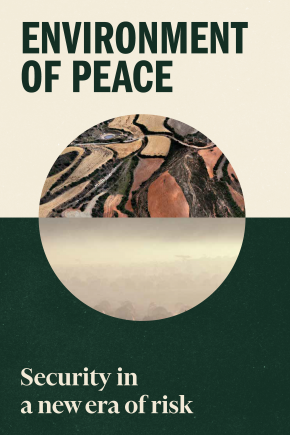 Read more about the report