The ten most important insights from climate science

To avoid the risk of tipping points, scientists argue we can gain a lot if we focus our efforts on marine ecosystems. They have a potential to deliver a triple benefit: carbon storage, biodiversity preservation and seafood supply. Photo: B. Christensen/Azote

A new report launched during the COP26 meeting in Glasgow outlines the ten most important new insights from climate science.

It is based on a recent horizon scan study published in the journal Global Sustainability and includes no less than 54 leading climate researchers from 21 countries.

The report, which is supported by the World Climate Research Programme, the Earth League, and Future Earth, accompanies each insight by targeted policy recommendations at various scales of action. It was presented to Patricia Espinosa, Executive Secretary of the United Nations Framework Convention on Climate Change (UNFCCC), during a press conference at COP26 in Glasgow, Scotland.

Stay far away from 2°C

Three centre researchers contributed to the report: Thorsten Blenckner, Jonathan Donges and Johan Rockström, the latter two of which are also affiliated with the Potsdam Institute for Climate Impact Research (PIK) in Germany.

The first major insight is that it is still possible to stabilize at 1.5°C warming, but also that immediate and drastic global action is required to avoid the risk of tipping points.

One example is how large parts of the Amazon might switch from rainforest to open savannah, causing a potential permanent loss of the Amazon basin as a major carbon sink.

“We do not know exactly at what temperature tipping elements shift from dampening to self-reinforcing global warming, but it is increasingly clear that we must stay as far away as possible from 2°C. This makes tipping elements like our large forest systems, and the Greenland ice sheet, our new global commons, which need to be governed by the world community, to secure our future on Earth," says Johan Rockström. 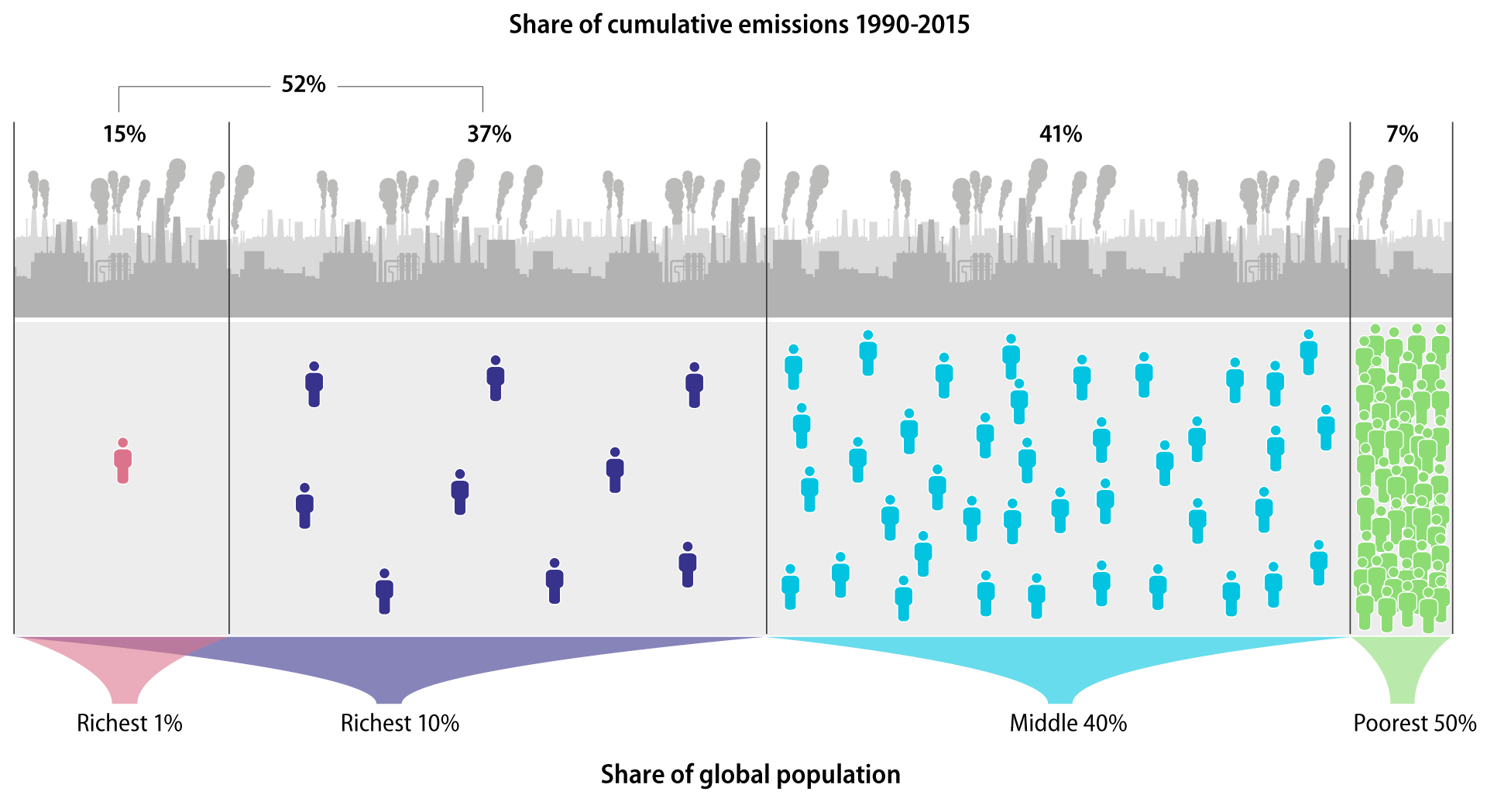 Figure from the new report illustrating the fifth insight that “Global climate action must be just”. It shows that the richest 10% of the global population have been responsible for more than half of the world’s greenhouse gas emissions between 1990 and 2015

The study behind the report shows that we can gain a lot if we focus our efforts on marine ecosystems. They have a potential to deliver a triple benefit: carbon storage, biodiversity preservation and seafood supply.

“Time is running out, but if we manage the oceans smart, it is achievable.”

Peter Schlosser from Arizona State University, co-chair of the Earth League, was on the editorial board of the report.

He stresses the importance of launching it during COP26: “It is our hope that this summary of the latest research from scientists around the world can help drive the global transformations we so desperately need.”