A better understanding of how tipping points work

A new paper in Earth System Dynamics analyses the risk of domino effects being triggered by each individual tipping elements due to global warming. One crucial tipping element is the Greenland Ice Sheet. Photo: C. Zenino/Wikimedia

A DOMINO EFFECT? Over the past decades, significant changes have been observed in several climate system tipping elements, including the ice sheets of Greenland and West Antarctica, the Atlantic Meridional Overturning Circulation (AMOC) and the Amazon rainforest.

With global warming continuing, there is increased risk that these tipping elements might cross a critical threshold, resulting in severe consequences for the global climate, ecosystems and human societies.

For example, it is thought that the Amazon rainforest is close to a critical level of deforestation which might, together with global warming, initiate such a transition, putting 30–50% of rainforest ecosystems at risk of shifting to tropical savannah or dry forests.

But while the processes underlying these shifts are fairly well understood, it is unclear how their interactions might impact the overall stability of the Earth’s climate system.

A new paper in Earth System Dynamics led by Nico Wunderling from the Potsdam Institute for Climate Impact Research, with centre researcher Jonathan Donges, analyses the risk of domino effects being triggered by each individual tipping elements due to global warming.

This analysis presents a first step towards synthesising the effects of positive and negative feedbacks between climate tipping elements.

The domino-like interactions foster cascading, nonlinear responses. “Under these circumstances, our model indicates that cascades are predominantly initiated by the polar ice sheets and mediated by the AMOC,” say the authors.

The results indicate that the ice sheets, which are already at risk of crossing their temperature thresholds within the Paris range of 1.5 to 2°C, are of particular importance for the stability of the climate system as a whole.

They also imply that the negative feedback loop connecting the Greenland Ice Sheet and the AMOC might not be able to stabilise the climate system as a whole, a possibility that was raised in earlier work by Gaucherel & Moron (2017).

“Our conceptual model does not represent the full complexity of the climate system, and is not intended to simulate the multitude of its biogeophysical processes or to make predictions of any kind,” say the authors.

“However, it does allow us to systematically assess the qualitative role of known interactions of some of the most critical components of the climate system in a comprehensive risk analysis”.

Overall, they conclude, this work can boost further investigation into the Earth’s tipping elements and how they interact. 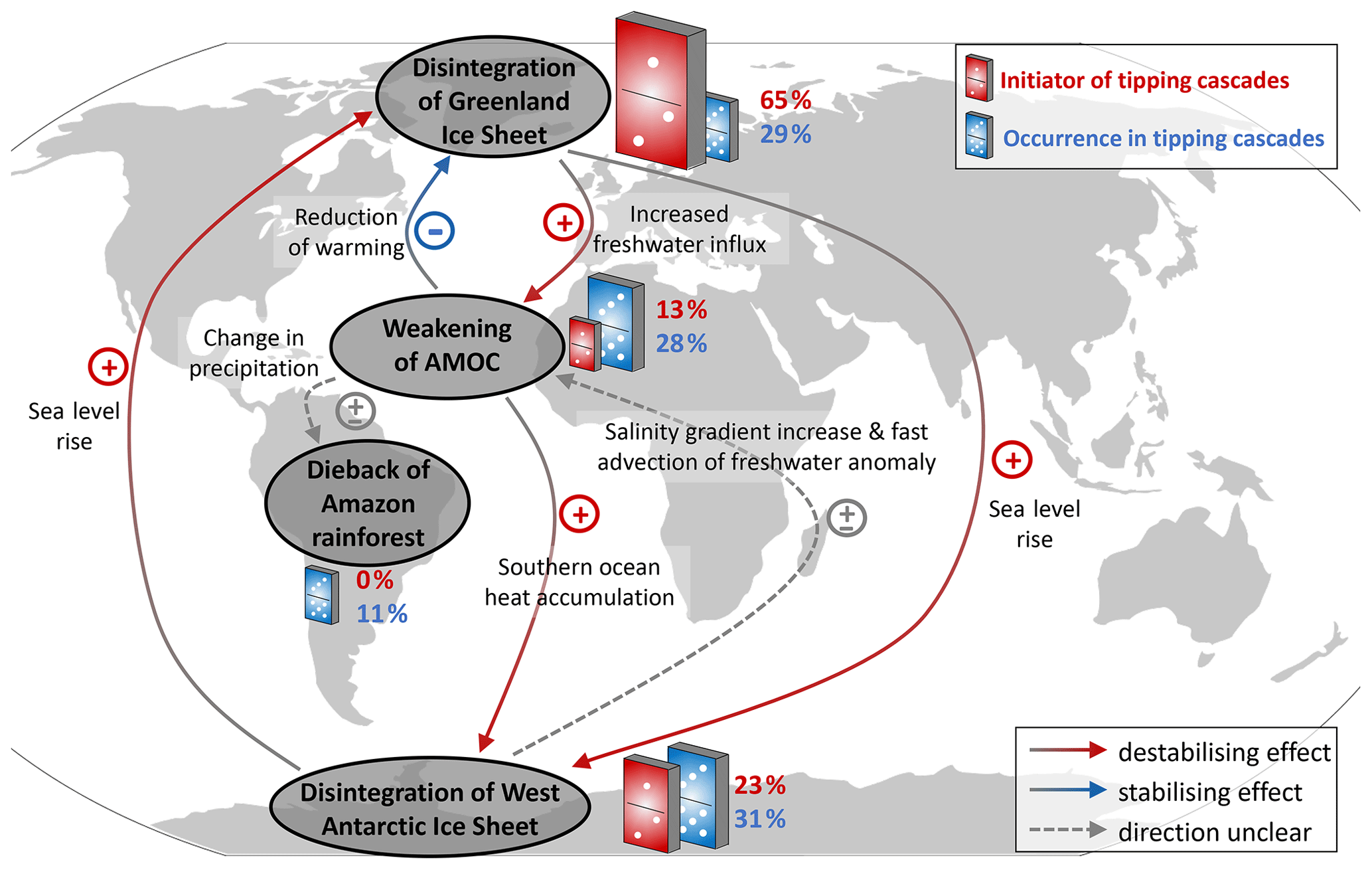 Interactions between climate tipping elements and their roles in tipping cascades. The Greenland Ice Sheet, the West Antarctic Ice Sheet, the Atlantic Meridional Overturning Circulation (AMOC) and the Amazon rainforest are depicted along with their main interactions.

Since more complex global climate models (such as general circulation models) are computationally prohibitively expensive for long-term simulations, the researchers condense the dynamics of each tipping element to a double-fold bifurcation equations approach. This differential equation leads to two stable states of each of the tipping elements dependent on the level of global warming and the interactions between the tipping elements.

While the differential equations approach simplifies the nature of the tipping elements to some extent, it enables the researchers to integrate all relevant model uncertainties such as uncertainties in critical threshold temperatures, interaction strengths and interaction structure. For the propagation of these uncertainties, they employ a comprehensive Monte Carlo ensemble including more than 3.5 million simulations.

Media coverage on the article by The Guardian