Fishing companies that operate on the high seas are beyond the reach of any nation’s laws and regulations. A new study connects the boats with specific companies and reveal who is profiting from fish catches in the global commons. Photo: Pixabay

Co-author and centre researcher Guillermo Crespo explains the methodology and the main insights from the study published in One Earth.

HIGH STAKES: A team of researchers including Henrik Österblom and Guillermo Ortuño Crespo from the centre have used satellite data and other analytical tools to identify companies fishing in high seas—waters that lie outside of national jurisdiction where fishing has raised fears about environmental and labor violations.

The study, which appears in the journal One Earth, is the first to link companies to fishing activity in these largely unregulated areas.

There is a lot of concern about companies that operate on the high seas, simply because there they are beyond the reach of any nation’s laws and regulations,” says Jennifer Jacquet, an associate professor at New York University and lead author of the study.

"By connecting those boats with specific companies, this study takes a first step in enhancing transparency—we now know a lot more about who is profiting from fish catches in the global commons."

This is a first step towards increased knowledge about what is happening in some of the most remote places on Earth. With these new insights we know better who we should engage with in order to achieve better stewardship of the high seas.

Species caught on the high seas are fished by industrial fleets and destined mainly for high-end markets in the U.S and Europe. Past assessments of high seas fish populations show that fishing in these waters has led to extraordinary declines in the abundance of many open-ocean species, including several species of tuna, swordfish, and marlin.

While fish catches are reported by nations, many companies catch and profit from fish in the global ocean, where fishing is subject to few regulations because the high seas lie beyond national jurisdiction.

High seas fishing is notably concentrated among a small number of entities. The Korean companies Sajo Group and Dongwon, which owns the U.S. subsidiary Starkist, were in the top 10 of the most active corporations on the high seas, along with a handful of Chinese corporations and one U.S. corporation based in Hawaii.

Approximately 100 companies, based in the United States, the United Kingdom, China, Taiwan, Russia, Spain, the Netherlands, and South Korea, among other nations, accounted for more than one-third of high seas fishing during the studied period. 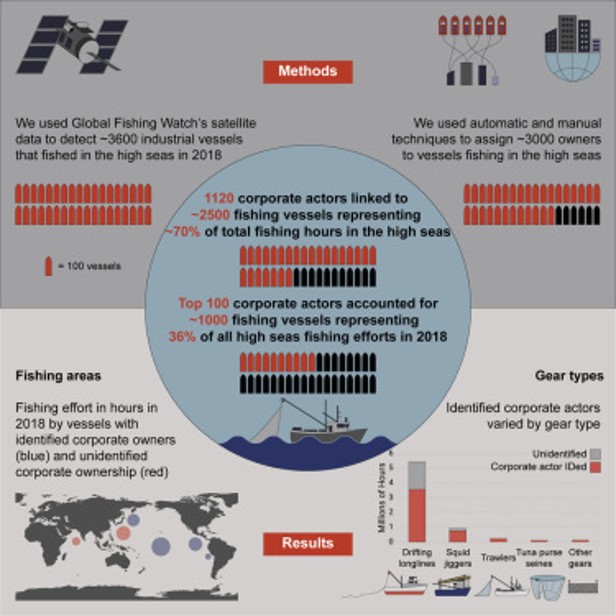