Climate migration can become an effective element of adaptation

The rest of the world can learn from climate adaptation strategies in Bangladesh, writes a team of renowned scientists in a commentary published in One Earth. Photo: M. Haque/Shutterstock

• Globally, people are increasingly being forced to, or choosing to, migrate because of climate change, most often to cities

"AN EFFECTIVE ELEMENT OF ADAPTATION": In Bangladesh, the government has over the past decades invested in systems to evacuate whole communities along the Bay of Bengal and help them return after cyclones.

This strategy has reduced costs and facilitated adaptation in ways that others could learn from as the planet warms, according to a commentary published in One Earth.

The authors include several centre researchers and colleagues from the Beijer Institute, as well as a long list of renowned scientists from around the world.

Neil Adger from the University of Exeter, UK, is the first author of the piece which also features researchers from Columbia, Princeton, Stanford, Yale, and other prestigious universities in Australia, Canada, Germany, the Netherlands, and Spain.

“More than 140 million people could potentially be directly displaced by climate change impacts by 2030 within their own countries,” they write.

Grasping the opportunity to make migration an effective element of adaptation needs to become central to national adaptation strategies and a stronger focus in international agreements between already connected countries.

Already now, people are increasingly migrating because of climate change, most often to cities. Some move because they are forced to by wildfires, hurricanes or drought. Others migrate by choice as a response to climate-related changes in agricultural, demographic, and geopolitical conditions.

In the western United States alone, 280,000 people had to flee their homes during early September 2020 because of wildfires.

Improved understanding of how and why people move and more coordination of policies can therefore reduce future costs and facilitate adaptation to climate change both within borders and internationally.

The best choices of policy response will depend on how severe the climate change threat is and how mobile people are (whether they have the capacity and the legal right to move).

Severe climate impacts and high mobility is, for example, expected to accelerate the number of migrants moving to urban areas, where climate risks themselves are projected to escalate: 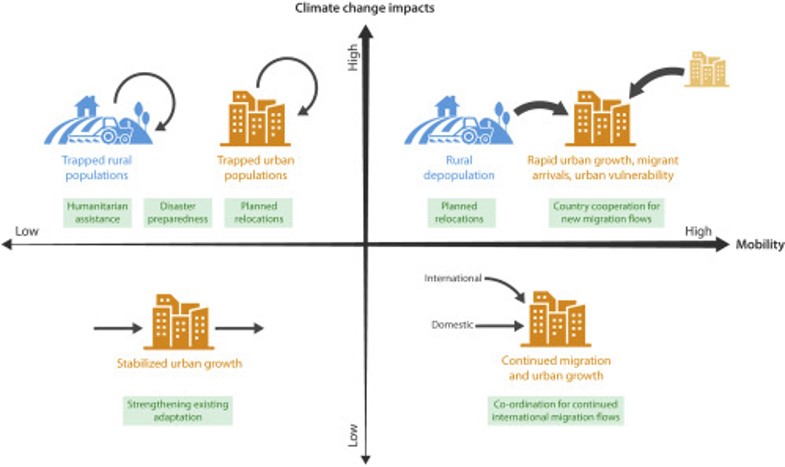 Another take home message is that migration comes with both costs and benefits in origin and destination regions. So, even though migration can create distress and unrest, it can also be effective adaptation to climate change. Consequently, it needs to be more included in city and national planning for climate change, and in international cooperation.

The commentary in One Earth discusses policy implications both within and across borders. Within countries, governments should promote safe and orderly resettlement, and provide infrastructure and services in safe locations.

Between countries, it is important to realise that cross-border migration is likely to grow substantially because of the climate crisis and other factors.

It goes without saying that this will require more long-term and better international cooperation to reduce the humanitarian costs, but often regional partnerships will do as most migration across borders is to neighbouring countries.

“Grasping the opportunity to make migration an effective element of adaptation needs to become central to national adaptation strategies and a stronger focus in international agreements between already connected countries,” the authors conclude.