As emissions grow, more parts of the Amazon are likely to dry out

RAPIDLY LOSING ABILITY TO ADAPT: Rainforests are very sensitive to changes that affect rainfall for extended periods. If rainfall drops below a certain threshold, areas may shift into a savanna state.

“In around 40 percent of the Amazon, the rainfall is now at a level where the forest could exist in either state – rainforest or savanna,” says Arie Staal, formerly a postdoctoral researcher at the Stockholm Resilience Centre and the Copernicus Institute of Utrecht University.

He is lead author of a study published in the journal Nature Communications. Centre colleagues Lan Wang-Erlandsson and Ingo Fetzer were among the co-authors.

The conclusions are concerning because parts of the Amazon region are currently receiving less rain than previously and this trend is expected to worsen as the region warms due to rising greenhouse gas emissions.

Staal and colleagues focused on the stability of tropical rainforests in the Americas, Africa, Asia and Oceania.

The team explored the resilience of tropical rainforests by looking at two questions: what if all the forests in the tropics disappeared, where would they grow back? And its inverse: what happens if rainforests covered the entire tropical region of Earth? 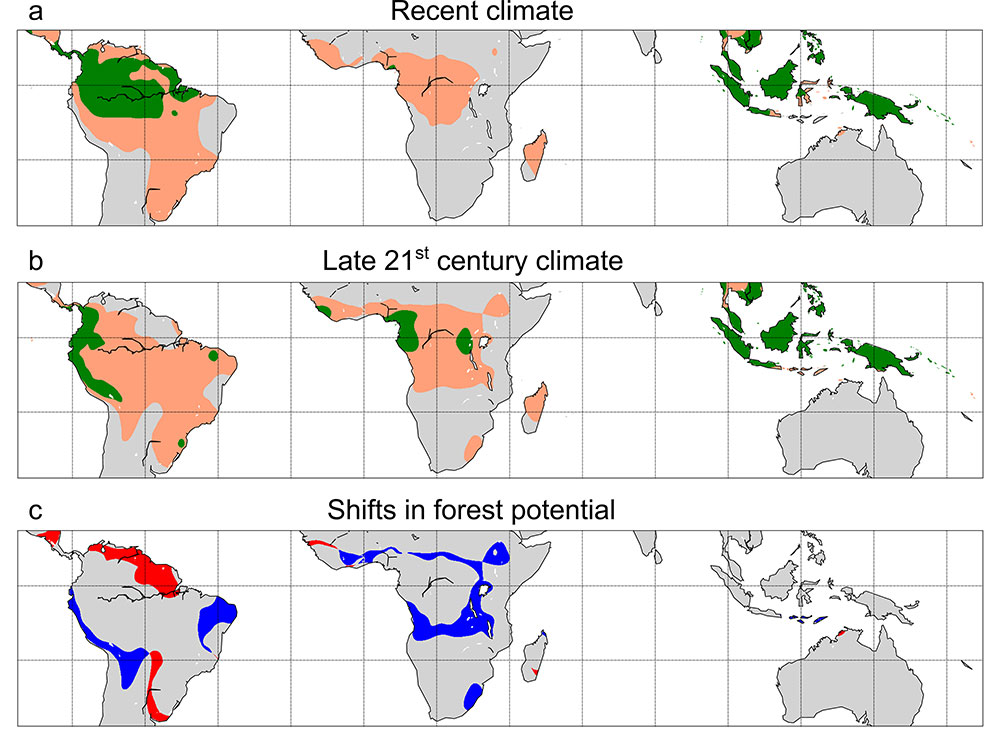 Overall, the researchers found that as emissions grow, more parts of the Amazon lose their natural resilience, become unstable and more likely to dry out and switch to become a savanna-type ecosystem. They note that even the most resilient part of the rainforest shrinks in area.

“If we removed all the trees in the Amazon in a high-emissions scenario a much smaller area would grow back than would be the case in the current climate,” says co-author and centre researcher Lan Wang-Erlandsson.

The researchers conclude that the smallest area that can sustain a rainforest in the Amazon contracts a substantial 66% in the high-emissions scenario.

In the Congo basin the team found that the forest remains at risk of changing state everywhere and will not grow back once gone, but that under a high emissions scenario part of the forest becomes less prone to crossing a tipping point.

“We understand now that rainforests on all continents are very sensitive to global change and can rapidly lose their ability to adapt,” says co-author Ingo Fetzer.

“Once gone, their recovery will take many decades to return to their original state. And given that rainforests host the majority of all global species, all this will be forever lost.”

The academics found that the minimal and maximal extents of the rainforests of Indonesia and Malaysia are relatively stable because their rainfall is more dependent on the ocean around them than on rainfall generated as a result of forest cover.

Lan Wang Erlandsson is a postdoctoral researcher focusing on the large-scale interactions between land, water, and climate, and their implications for resilience

Ingo Fetzer's research looks at how multiple stressors interact across global to local scales, and how they affect system stability, related to the planetary boundaries, global dynamics and -stability, and sustainable food production