Increasing urbanisation often coincides with increasing informality and lack of connections to the infrastructure related to water, land, and other resources. Researchers have investigated this relationship in the eThekwini municipality of South Africa. Photo: PxHere

Natural resources have powered civilisations throughout the ages. Without water, food, energy, and other resources, societies could not survive. As modern societies turn increasingly to urbanisation, use of resources becomes detached from the local natural source base.

In the Global South for instance, increasing urbanisation coincides with increasing informality and lack of connections to the infrastructure related to water, land, and other resources.

Mapping the level and type of dependence on natural resources could prove useful to target policies.

Led by both Stefano Balbi of the Basque Centre for Climate Change and centre researcher Odirilwe Selomane, a study published in Environmental Research Letters models human dependence on natural resources. The study’s international group of researchers investigates this relationship in the eThekwini municipality of South Africa. They use statistics from the Statistics South Africa office to map resource-dependency among urban dwellers.

The growing informal side of the Global South cities means that they develop differently, and people in them continue to be dependent on local natural resources to meet basic needs.

In general, the researchers found that very few people living in the urban core of eThekwini municipality were directly dependent on a natural resource. However, moving away from this urban core, dependence increases, especially in areas with higher population density and informal settlements (i.e. settlements not formally sanctioned and therefore lacking basic amenities).

The authors suggest that this model of predicting dependence could be applied to other regions within Africa and other data poor regions. However, this will require further research, especially considering most of the continent does not have access to detailed data about households. They also point out the gaps that remain, which require mapping out finer details of resource dependency overtime and over wider regions.

The researchers note how this ability to map out dependence on resources is meaningful for understanding “key social-ecological dynamics, such as inequality of access to natural resource and public infrastructure.” 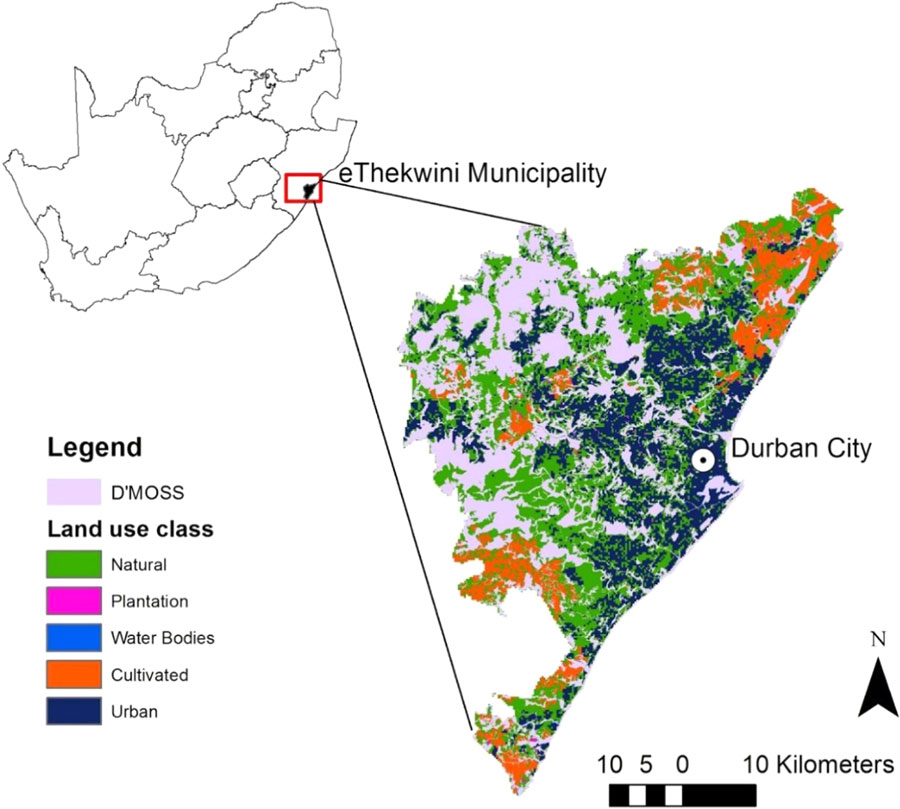 The eThekwini Municipality showing the location of Durban and the Durban Metropolitan Open Space System (D'MOSS). Click on map to access scientific study

Selomane and his colleagues conclude by stressing this need to understand human dependence on natural resources in order to improve management for the health of ecosystems and societies.

"Fully understanding the spatial and temporal dynamics of human dependence on local natural resources is fundamental in order to target existing policies, or create new ones that can enable the maintenance of adequate local ecosystem health, even more so in rapidly urbanising contexts."

The researchers used openly accessible national survey data to develop a metric of overall dependence on natural resources in South Africa. This metric was based on recorded uses of four ecosystem services. They then used seven socio-demographic factors in combination with Bayesian learning to patterns of dependence, without using the recorded actual dependence, with the hope to detect similar patters of dependence. The test the validity of the results from the model using independent data from OpenStreetMaps in both eThekwini, their study area, and another area, Cape Town metropolitan and find that the model performs well even with these conditions.