There are plenty of examples of local actors self-organizing to manage local resources but less empirical evidence that these grass-root initiatives actually translate to better environmental governance. A study published in Ambio puts their theoretical potential to empirical test. Photo: J. Enqvist

A buzz or a baller?

Environmental governance is tricky. One key challenge is to have management institutions organized in such a way that they makes sense from an ecological perspective. Sounds easy? It is not.

Administrative boundaries are typically set according to social dynamics rather than ecological ones. Today, there is a popular notion that a better fit between social and environmental needs is achieved with management structures built from the bottom-up. There are, indeed, plenty of examples of local actors self-organizing to manage local resources. What is less plentiful is empirical evidence that these grass-root initiatives actually translate into better environmental governance.

In a recent study published in Ambio, centre researchers goes to the bottom of these initiatives by putting their theoretical potential to empirical test.

Bottom-up approaches should not be advocated uncritically, and there remains a need for empirical evidence on and methodological tools to assess the ways in which participatory approaches might enhance fit.

The galore of Bangalore

Urbanization brings this ‘problem of fit’ to the fore. Urban growth is driven by social processes that seldom account for ecological realities. As a result, the ecosystems on which city dwellers depend on are put under unsustainable pressure. The most significant urban expansion is projected to happen in South Asia and Sub-Saharan Africa. In contrast to the Global North, urban citizens in the Global South rely heavily on informal institutions for provision of water management and other basic services.

Bangalore city (also known as Bengaluru) in Southern India is a case in point. The current population of 11.4 million is expected to increase rapidly due to the city’s booming IT and communication industry. As the population grows and adopts new consumption habits, additional stress is put onto the city’s water supply.

Bangalore’s 200 lakes are formally managed by a range of different municipal and state authorities, with little to no coordination across departments. A majority of the lakes are polluted, overgrown or simply converted to other land uses. In parallel to the formal managers, a patchwork of informal citizen initiatives has emerged to restore and protect the city’s water bodies. Using these lake groups as a case study, the researchers developed a method to study bottom-up approaches to (water) resource management. They combined quantitative network analysis with qualitative interviews to test if bottom-up approaches lead to better fit and if so, why that is.

"This is something that either method would have had difficulties to achieve alone," says co-author Maria Tengö.

Since all lakes came under ownership of public authorities n the 1960s, the responsibility for Bangalore’s interconnected bodies of water has been shifted around and split between municipal and state agencies. The reform coincided with the introduction of a new water source which meant that lakes were no longer deemed as valuable. Paired with rapid urbanization, this was a recipe for a ‘problem of fit’ that led to neglected and degraded lake ecosystems.

In reaction, community-groups formed to restore and manage the city’s lakes. In 2010, the work of these groups was recognized as some of them signed memorandums of understandings (MOUs) with municipal authorities, giving them increased influence and responsibility for lake management in Bangalore. 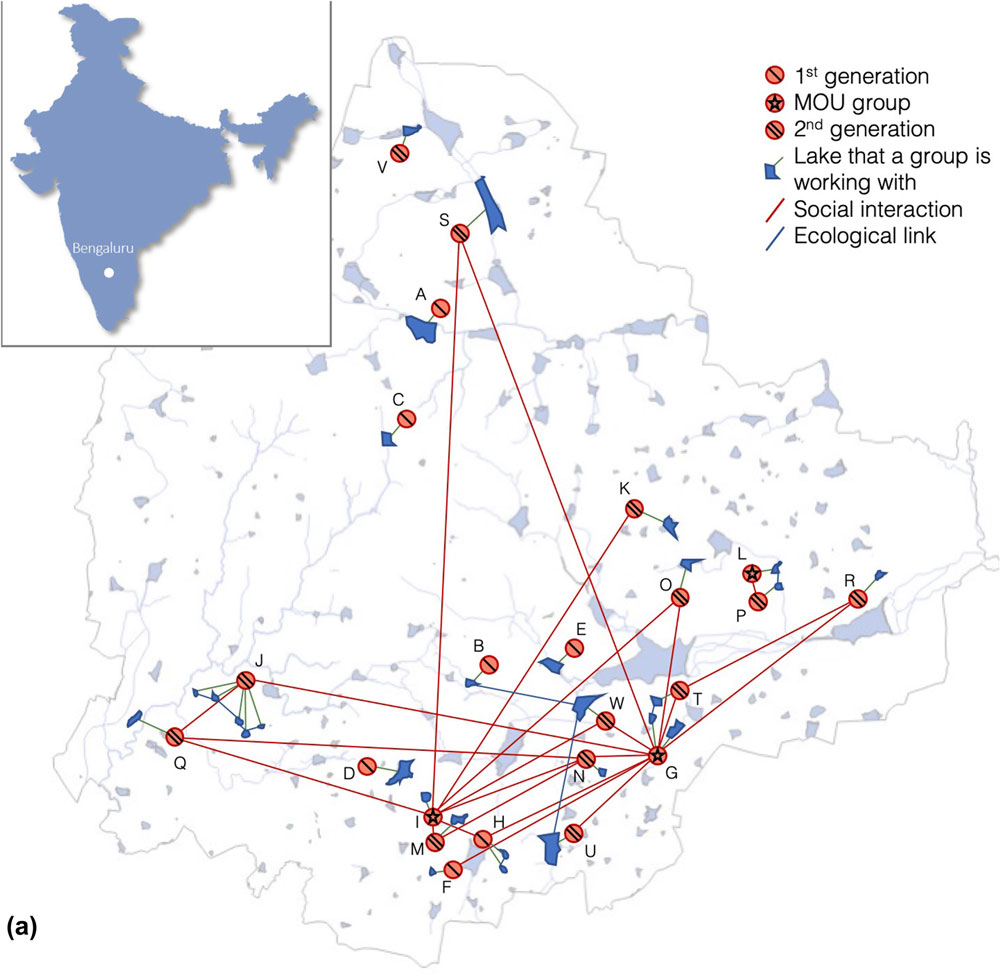 To evaluate these lake initiatives, the researchers formulated three hypotheses:

H1. Bangalore’s lake groups form a network of collaboration that matches the network of lake connections.

H2. This socio-ecological fit stems directly from the MOU groups.

H3. Groups contribute more to this fit if they are connected to the MOUs groups.

The researchers found support for the first hypothesis: the Bangalore lake groups do get close to achieve that hard-won fit between the social and the ecological. To reject, or not reject the second hypothesis was less straight forward. MOUs were both found to work with unconnected lakes (decreasing the fit) and being part of larger collaborative networks that represent a good fit, but overall, removing them from the network would decrease fit.

However, the most important contribution to social–ecological fit comes from newer groups that collaborate with and receive support from more senior MOU groups – giving support to Hypothesis 3.

Based on these findings, the researchers conclude that it seems like groups with MOUs do not automatically contribute to better fit, but they do function as important enablers and examples to learn from and build on, helping newer groups to better consider landscape-level dynamics and lake connectivity in their collaborations with one another and with public authorities.

A socio-ecological fit for all

The conclusion is that bottom-up approaches to ecosystem management have great potential but they are not unproblematic.

“Lessons from the Northern hemisphere show that grass-root initiatives can marginalize those community members that lack resources or social positioning to participate”, says co-author Örjan Bodin.

In addition, the emphasis on local management has been criticized for promoting a neoliberal agenda of ‘less government, more fun’ by reducing the responsibilities of the state. As mentioned previously, informal institutions and processes play important roles in cities in the Global South, but they come with a risk of reproducing unequal social structures.

The next challenge, the authors conclude, will be to apply bottom-up approaches so as to achieve socio-ecological fit in resource management without (re)imposing social misfit in the communities.

A total of 23 lake groups were identified through press reports, social media, and key informant interviews. The groups manage 29 lakes, representing about 15 percent of Bengaluru’s lakes.

The network analysis used ecological (representing lakes) and social (actors) ‘nodes’ to visually map out connections i.e., collaborations and water flows. Particular networks of connections form ‘building blocks’ and 10 building blocks were studied in the Bangalore case. The observed social–ecological network was compared to a hypothetical model based on 1000 computer generated networks of the same size and density. If the Bengaluru building blocks significantly deviated from the model, the hypotheses could either be accepted or rejected. For hypothesis 1, a high presence of building blocks equalled a good socio-ecological fit. Hypothesis 2 was tested by the presence (or absence) of MOUs. For hypothesis 3, a central location of MOUs implied connections to other groups.

Semi-structured interviews were conducted with up to five representatives from each lake group. Questions included reasons for engagement in groups, inter-group cooperation, relationships with authorities, and the lake groups’ role in the city’s future development. 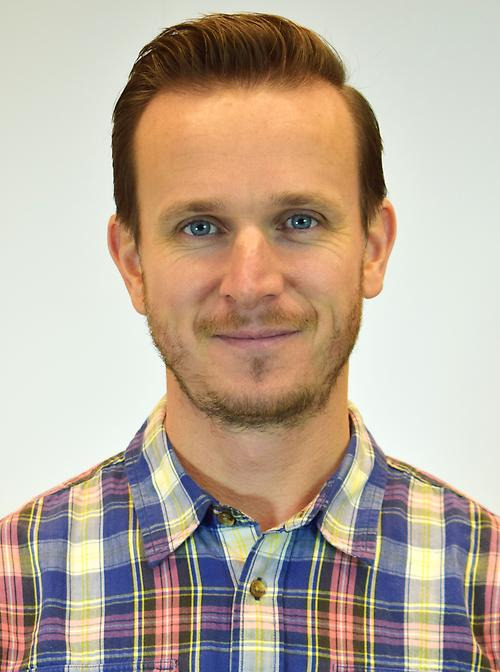 Johan Enqvist is a former PhD student at the centre, currently a postdoctoral fellow at the African Climate and Development Initiative at the University of Cape Town.

Maria Tengö’s research sets out to understand how positive connections between people and nature matter for moving towards trajectories of ecosystem-based management for human well-being. In particular, she is interested in the in-tangible, non-material aspects of human-nature interactions. 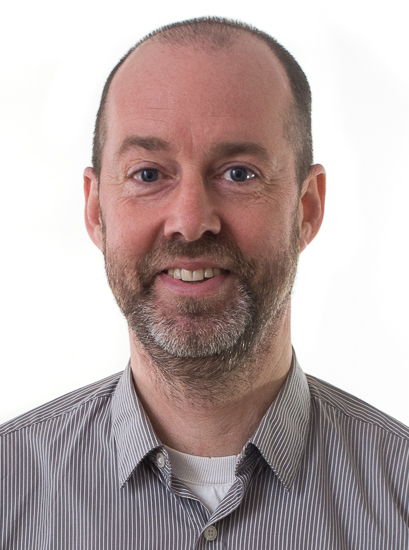