A new comprehensive global-ocean assessment of climate change shows that global marine animal biomass – the total weight of marine animals such as fish, invertebrates and marine mammals in the ocean – will decline under all emission scenarios, driven largely by increasing temperature and decreasing primary production. Photo: J. Lokrantz

Too warm to swim

Comprehensive global analysis shows a warmer ocean will hold lower animal abundance, with fish and mammals to suffer the most

Climate change will affect the distribution and abundance of marine life, but the full extent of these changes under future warming has been difficult to predict due to the limitations of individual ecosystem models used for such forecasts. However, by combining such models, a more complete picture can emerge.

Reporting in the Proceedings of the National Academy of Sciences, an international group of 35 researchers including Susa Niiranen from the centre presents a comprehensive global-ocean assessment of climate change by using a combination of multiple climate and ecosystem models. This model ‘ensemble’ reveals that global marine animal biomass – the total weight of marine animals such as fish, invertebrates and marine mammals in the ocean – will decline under all emission scenarios, driven largely by increasing temperature and decreasing primary production.

Large-scale research efforts such as these that bring together experts with diverse expertise are of utmost importance when addressing an issue of such importance and complexity as the future of our living oceans.

The extent of projected losses can be constrained by emission reductions, with only a 5% decline under a strong mitigation scenario, but 17% under business-as-usual emissions by the end of the 21st century. Notably, the magnitude of this climate change effect was similar in an ocean with and without fishing pressure.

“Reduction of greenhouse gas emissions will undoubtedly help to safeguard marine life as much as possible against further losses," says lead author Heike Lotze at Dalhousie University in Halifax, Canada.

The analysis also suggested that climate-change impacts may be more severe at higher food-web levels, meaning that fish and marine mammals may suffer more severe declines compared to phytoplankton. This process is called ‘trophic amplification’ and describes the particular vulnerability of animals such as large fish at the higher ends of marine food chains.

“Our findings suggest that larger marine animals, many of which are already of conservation concern, could show a particular vulnerability to climate-driven declines, with a domino effect from phytoplankton up the food chain,” adds co-author Derek Tittensor of the UN Environment World Conservation Monitoring Centre in Cambridge, UK. 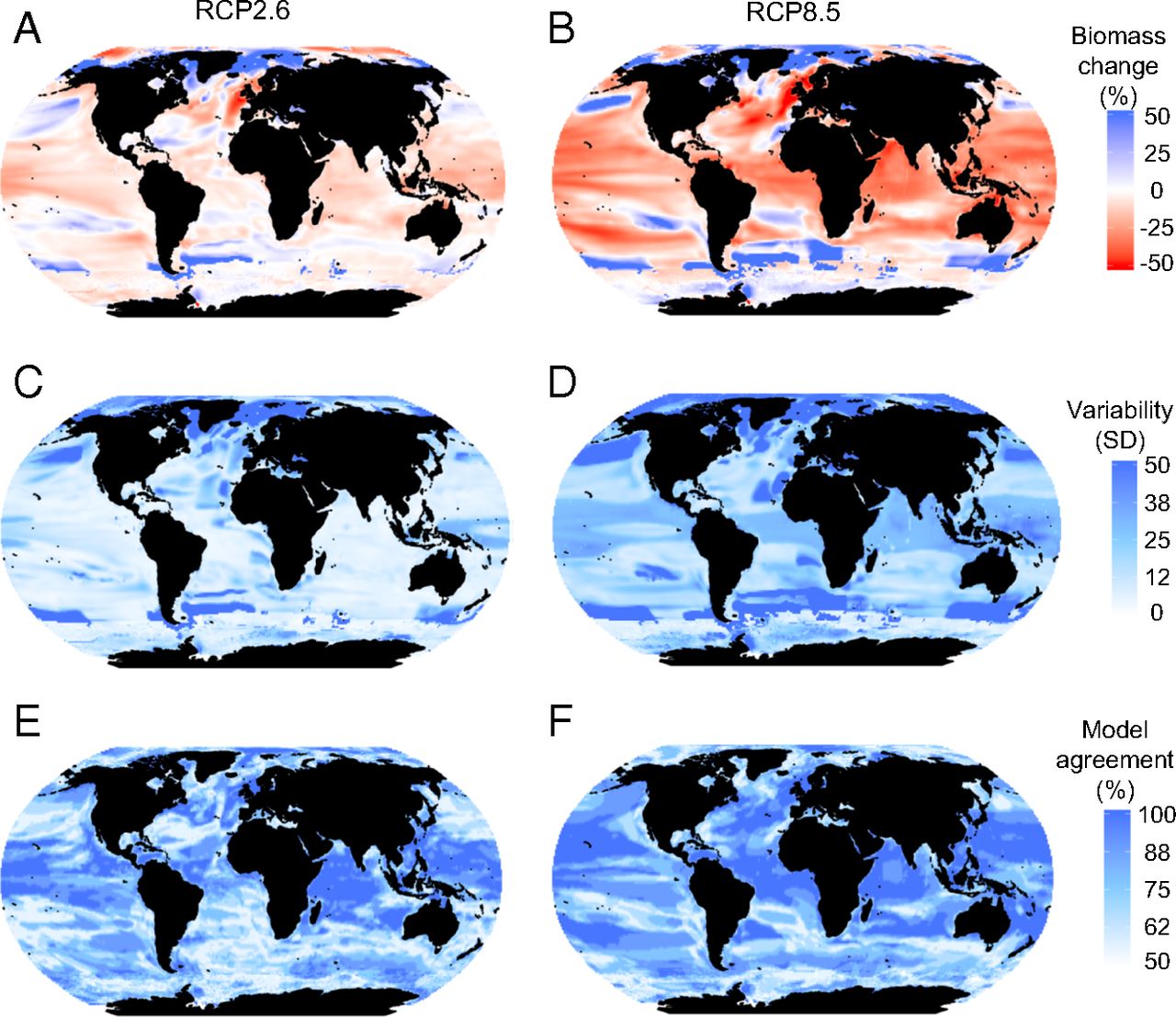 Spatial patterns of projected biomass changes. Shown are global ensemble projections at a 1 × 1 degree resolution for (A, C, and E) RCP2.6 and (B, D, and F) RCP8.5. (A and B) Multimodel mean change (percent, n = 10) in total marine animal biomass in 2090–2099 relative to 1990–1999 without fishing. (C and D) Variability among different ecosystem model and ESM combinations expressed as 1 SD. (E and F) Model agreement (percent) on the direction of change.

Mapping the projected changes in the global ocean (see Figure below) revealed that biomass will decline in many temperate to tropical ocean regions where people are highly dependent on seafood supply and where marine biodiversity is already affected by cumulative human impacts. Here, climate change is creating another layer of stress onto marine ecosystems and human societies alike.

In contrast, many polar regions around the Arctic and Antarctica could show biomass increases which may provide new opportunities for marine resource use but also challenges to marine management and conservation.

“The fact that the estimated climate-change impacts are independent of fishing provides an added incentive to develop sustainable and adaptive fishing, responsive to climate change, which we need to feed a world of nine billion humans” says co-author Manuel Barange, Director of Fisheries and Aquaculture at the Food and Agriculture Organisation (FAO) in Rome, Italy.

The results provide the most comprehensive outlook on potential climate-driven ecological changes in the ocean to date and can help anticipate changes in valuable marine resources under climate change. As such, the results can inform ongoing international climate and biodiversity negotiations. The study has been compiled over the past six years by the international FishMIP consortium, a group of experts and modellers on marine ecosystem dynamics under climate change (see links below), in collaboration with the Inter-Sectoral Impact Model Intercomparison Project (ISIMIP). 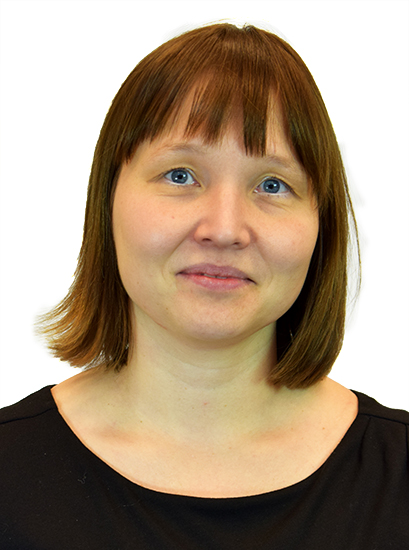 Susa Niiranen’s research focuses on change in marine ecosystems that is driven by multiple environmental and anthropogenic stressors.