New study highlights a method for understanding how residents experience and relate to their city. Photo: J. Berg/Azote

Balancing urban development and residents’ experience of their city is a difficult act. New study presents method for understanding how city dwellers use their cityscape

• Centre researchers develop method for operationalizing resilience principles in an urban landscape and find eight distinct typologies
• Application of the study could help urban developers, planners and city officials understand how residents use space, and also to promote designs of more healthy and attractive cities
• Stockholm, Sweden is used as a case study for this new method

The world is becoming increasingly urban. More and more people are living in cities, and the forecast says this trend will continue. While cities will have to grow, simply adding more infrastructure is not enough – especially if we strive to create sustainable, enjoyable cities that promote positive experiences and human well-being.

So how do we build cities that bolster resilient levels of human wellbeing amidst current urbanization? Stephan Barthel, centre researcher, suggests that knowing how people interact with a space is a good clue. “Understanding how relationships between urban form and wellbeing together play out is key for building healthy cities, and requires going beyond density to incorporate other variables that paint a richer picture of how humans perceive and use urban space,” he explains.

In a new Landscape and Urban Planning study, Barthel, along with centre MSc graduate Karl Samuelsson and centre researcher Johan Colding, look at the interactions of different relationships between urban environments and well-being. Using Stockholm, Sweden as a case study, the authors use ‘resilience principles’ as a guide, and develop typologies for how residents use the city space.

While an increasing amount of research has been done on city-wide resilience, our method represents a promising way for exploring urban resilience at eye level, that is, the level where people experience the city

The authors used three resilience principles as a guide for their study: (1) managing slow variables; (2) maintain diversity; and (3) managing connectivity.

In parallel to resilience building in ecosystems, they argue that we need to view cities a complex social-ecological systems where spatial landscape features acts as slow changing variables.

"With such view resilient city designs need to revolve around attractiveness for humans in terms of spatial access to e.g. cultural diversity, retail, socioeconomic benefits and nature experiences, simultaneously as we analyze capacity of cities for dealing with the environmental trade-offs that they impose in their growth," Johan Colding explains.

They examined these eight typologies by looking at their diversity and connectivity in terms of human experience. They were also looking at the slowly changing variable of the morphology of the urban social-ecological landscape, here consisting of the street network, the density and mix of the population, and the landscape features. Such social-ecological urban morphology changes slowly and urbanization acts as a disturbance on it. 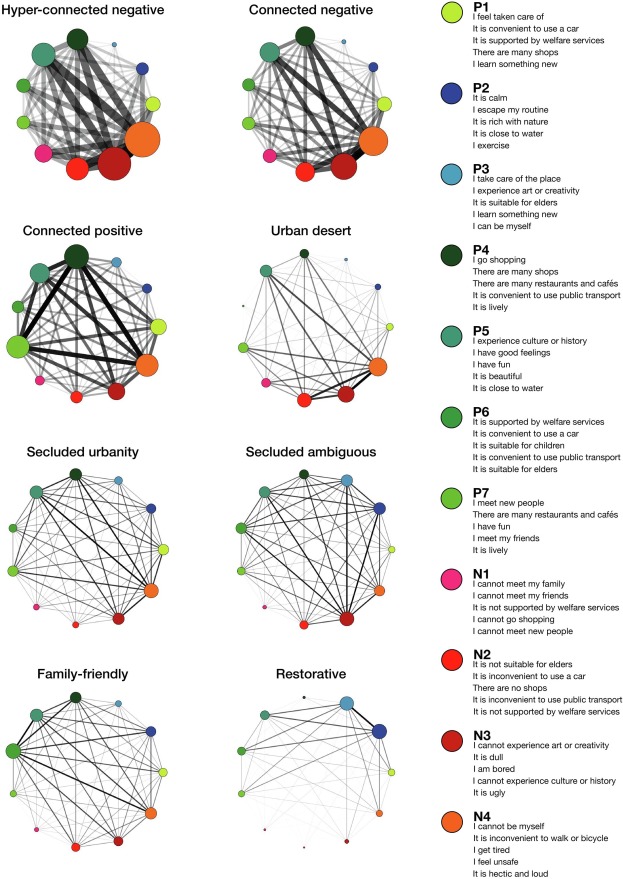 The authors found that experiences helped show the relationships between the urban environment and wellbeing. In line with previous studies, they found that places that were densely populated, highly connected, and dominated by workplaces such as the typology hyper-connected negative, were perceived as hectic and unsafe, compared to areas with similar citizen density but characterized by a mix of residents and workplaces and with nature environments on walking distance.

Based on this finding, Samuelsson suggests: “If Stockholm’s central parts were to become less spatially integrated and had offices converted into green architecture housing, experiences that hinder wellbeing might be curbed. They also found counterevidence on the current treatment of connectivity in the urban resilience literature as something where more is always better.”

Another key finding was that three different attractive typologies - secluded urbanity, secluded ambiguous, and family-friendly – all had similar connectivity, diversity, and proportion of positive experiences. This finding indicate that navigating the experientially attractive city amidst urbanization requires safe-guarding a diversity of experiential typologies catering to different kinds of needs of people.

Based on their findings, the authors conclude that: “Whether there are people on the streets or inside buildings might not always matter for the connectivity or diversity of experiences, but it matters for the kinds of experiences. Because people on the streets and people inside buildings are best captured by different variables, this points to the inadequacy of density alone as a proxy for how urban space is experienced and used.”

The authors point out that future work should look at how cities could be designed so that residents can easily access restorative environments. Furthermore, green and natural spaces offer a number of other benefits and ecosystem services important for sustainability as a whole.

They also believe their method could act as a tool for urban planners and city officials when it comes to designing and redesigning cities.

However, the authors highlight a few points that should be taken into consideration:

First, the majority of respondents in this study were between 25-44 years old and came from a random sample. The views collected may therefore not represent those representative of Stockholm residents. Second, this study is simply a snapshot in time. Future studies could benefit from looking at how views and experiences of certain places are static or change over time.

In developing their method for operationalizing resilience principles in an urban landscape, the authors use different quantitative spatial analysis techniques and statistics.

They employed public participatory GIS (PPGIS) using an open, online portal to a random group of 780 Stockholm, Sweden residents. This allowed citizens to report positive and negatives experiences at ‘eye level,’ or as residents experience Stockholm.

Then the authors used R statistical software to run a latent class analysis (LCA) as a way to analyze and group the experience data. The authors grouped the experiences into eight different typologies.

To conduct the spatial analysis, the authors created an axil map, which determines the fewest number of straight lines. They defined this as ‘perceptual units’ for city residents, or how residents use the urban space. The authors then divided the entire city into 1km2 units using QGIS as a way to divide up the city into different uses.

Finally, the authors mapped the experience typologies using the Place Snytax Tool for QGIS, and a number of other statistical tools using R. The authors examined diversity, accessibility to the physical environment (residents, workplaces, major roads, nature, water) and connectivity within the urban landscape.

Stephan Barthel is a researcher at the centre and the University of Gävle, Sweden. His work focuses on sustainability issues in metropolitan landscapes.

Johan Colding is an affiliated associate professor at the Beijer Institute of Ecological Economics working on ecosystem services in urban planning.