Two thirds of the cropland required to grow plant-based resources for non-food products in Europe come outside the EU – often from tropical regions. Palm oil and soybean oil are examples of resources used in the production of cosmetics and fuel. Photo: Wikimedia

• Most of these resources, like cotton, palm oil and rubber, are sourced from Asia

Plant-based resources for non-food purposes are in high demand around the world, particularly in Europe. Palm oil and soybean oil are examples of resources used in the production of cosmetics and fuel.

Now, a study published in Environmental Research Letters shows that two-thirds (65%) of the cropland required to grow plant-based resources for non-food products come from other continents – often from tropical regions. In the food sector, Europe’s demand for cropland resources from abroad has also been increasing, but it is much lower at 15%.

Most of the plant-based resources for usage in Europe are sourced from Asia. After cotton (1.7 million hectares mainly from India, China, and Pakistan), palm oil ranks second with about 6.4 billion liters of palm oil harvested on an area of about 1.6 million hectares a year. This is brought to Europe either as unprocessed palm oil, or in the form of processed goods such as biodiesel, detergents, soaps, cosmetic products, or candles.

In addition, Asia supplies rubber (e.g. for car tires) corresponding to approximately 1.3 million hectares and coconut oil of 0.7 million hectares, while 1.9 million hectares of cropland outside the EU are used to produce feed for livestock production to supply leather and wool for consumption in Europe. Europe also sources maize-based ethanol from the USA to add to petrol.

The bioeconomy will inevitably play a key role in a post-fossil age where we limit climate change below the Paris agreement of 1.5 degree Celsius, concludes the new study. In addition, globalization will very likely continue and further connect consumers with distant natural resources, such as fertile land, water and forests, in other countries and continents. This will require new governance and management approaches.

“New monitoring schemes and novel environmental policy measures are needed when a bio-based economy should achieve its goals across multiple sustainability targets, clearly formulated in the globally agreed Sustainable Development Goals,” explains lead author Martin Bruckner from the Institute for Ecological Economics at the Vienna University of Economics and Business (WU).

Previous studies have shown the key role of oil crops in contributing to deforestation of natural tropical forests. The new study, again, finds that vegetable oils used for biofuels, detergents, lubricants and polymers, contribute more than one third to the non-food cropland footprint of the EU. More than half of it is from cropland resources abroad, primarily the Asia-Pacific region. 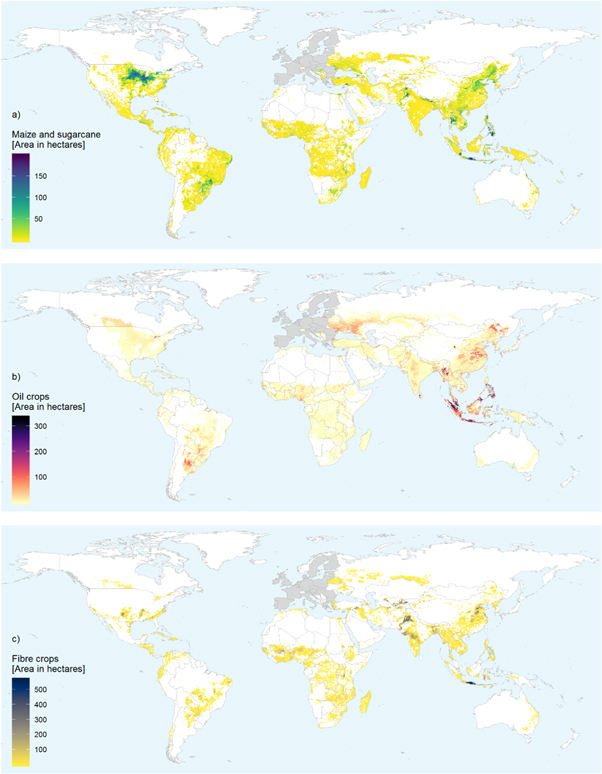 EU's non-food related cropland use outside the EU in hectares per grid cell for (a) maize and sugarcane, (b) oil crops, and (c) fibre crops. The colour scale indicates the number of hectares of cropland used by the EU in each grid cell (5 arcminutes). Click on image to access publication

The authors emphasize that Europe plays a crucial role in determining global developments in the growing bioeconomy as it is today the biggest consuming region of non-food biomass products (measured in cropland area) and also the largest net-importer. They also conclude that the contribution of the bioeconomy to sustainability will only unfold if production standards meet globally implemented environmental and social sustainability standards. This needs a broad discussion on less resource intensive consumption patterns, multiple competing demands for biomaterials from various sectors of the bioeconomy, livestock consumption patterns and health, and multi-functional agriculture including its contribution to the preservation of the environment and biodiversity.

“Europe plays a crucial role in determining global developments as it is the biggest consuming region of non-food biomass products (measured in cropland area) and also the largest net importer,” says Tiina Häyhä.

If the European bioeconomy were to promote sustainable development at global scale, tools need to be in place that monitor trade-induced land use spill-over and displacement effects that emanate from the region’s energy, agricultural, and bioeconomy policy programmes.

“Environmental footprint measures, such as the land footprint, together with global environmental targets, can guide the EU in its process of implement ing the Sustainable Development Goals, and provide the data basis to monitor and review progress."

This article has been adapted from a press release sent out by the Vienna University of Economics and Business Press Office and the International Institute for Applied Systems Analysis (IIASA).

The study implements a hybrid top-down accounting approach to track the demand for cropland embodied in biomass flows along global supply chains by linking the biophysical LANDFLOW model with the multi-regional input–output (MRIO) model EXIOBASE 3. To grant full access and foster transparency, all data, R scripts, and supplementary files to reproduce this study as well as all presented maps and figures can be found on GitHub. 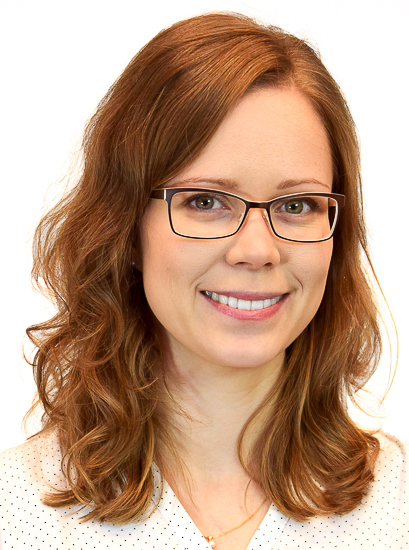