Foresight is a collaborative working environment where a variety of stakeholders can meet and create scenarios that are realistic thus improving the chances of reaching a certain desired future. The approach has big potential but can only be successful if certain other conditions are in place. Photo: A. Hebinck

From hindsight to foresight

Four cases of participatory foresight exercises show impact is not a given. Here’s how to fix it

The city of Eindhoven is probably more known for its football team than its urban green. But over the past few years, several urban food initiatives have sprung up, enjoying an increasing amount of attention from the local government.

‘Proeftuin040’, a knowledge network established in 2014 to further sustainable urban green space, was in 2016 tasked by the city council to help develop visions and scenarios on how Eindhoven could support the many food initiatives that have come up in the city.

To do so, they applied an approach called foresight, which helps identify uncertainties about the future and connect them with decisions that have to be made today. The approach provides a collaborative working environment where a variety of stakeholders can meet and create scenarios that are realistic thus improving the chances of reaching a certain desired future.

The efforts can include back-casting, the process of planning backwards in a step-wise fashion from an envisioned future to the present. The goal is to identify as many opportunities and challenges along every step of the way towards the realisation of the desired scenario. In the case of Eindhoven, the outcomes of the process were considered to have potential although Proeftuin040 at that time struggled to mobilise enough stakeholders to buy into their vision. 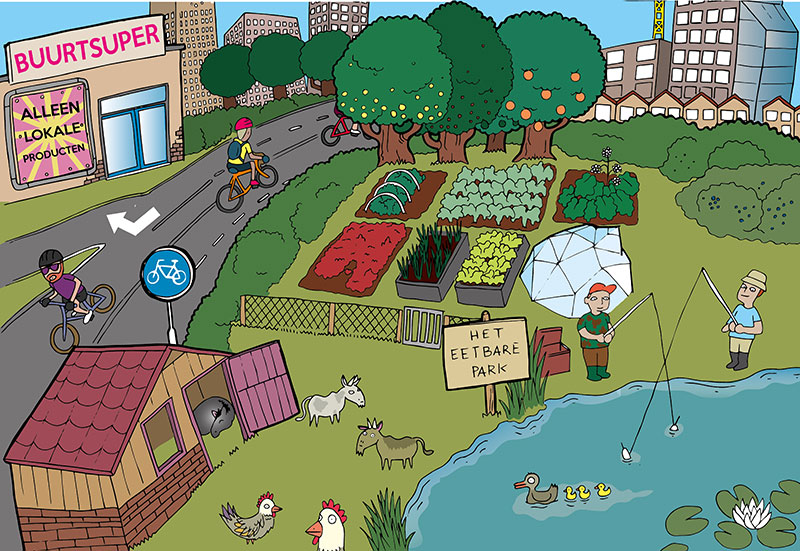 One of the constructed scenarios drawn after a workshop in Eindhoven. Illustration: TRANSMANGO project

The more flexible and inclusive, the better

So what is missing? That is the question asked by centre researcher Aniek Hebinck and colleagues in an article recently published in the journal Ecology & Society. Specifically, they wanted to know what role a participatory foresight process could play in transformative food systems change. In addition to Eindhoven, Hebinck and her colleagues studied similar exercises in Tuscany, Burkina Faso and Dar as Salaam. Together they provided the researchers with rich data to distil some "key methodological lessons" about foresight processes.

Overall, Hebinck found that it matters whether higher institutional and political levels recognise the need for urgent transformative change. This was evident in all four cases that were studied. Furthermore, institutional and governance practices, cultures and procedures determine the extent of broader support.

Hebinck and her colleagues suggest several roles foresight can play in catalysing transformative change. The first role puts the foresight process in the preconceptualising phase, a relatively modest role where participants unpack various scenarios in order to discover what is required to achieve them.

A second and slightly more ambitious role is to use the foresight process as an opportunity to include a broader range of stakeholders and form new networks of change agents.

"Governance, as a broad system of decision making in the context of food systems, does not only involve policy making or the application of state authority, it also includes civil society such as church-based groups, charities, business groups and social movements that are advocating for changes in the food system," Hebinck says. These new networks can boost the chances of developing scenarios that are not only more inclusive but are also more likely to be followed by action.

An even more ambitious role is to use foresight processes as a forum for turning strategic planning of scenarios outcomes into action. The plans that are being developed will be based on the commitments of the change agents involved in the network.

Nothing happens without a bit of charisma

But no matter how ambitious the plan is, much depends on who is leading the process. Without sufficient knowledge, charisma, legitimacy and access to crucial networks, any process is doomed.

"Individuals in leading positions and their leadership skills critically define the initial phase of transformative change," Hebinck explains. The role of established elites also matters. While collaboration with politically and financially strong stakeholders offers opportunities to challenge dominant regime powers and institutions from within, it also risks empowering already established institutions that are less open for change. This was partly the case in Eindhoven, where some of the visions for the city was considered to be too radical. Had it not been for a vigorous negotiation and swift action of the leading change maker, the vision could have been sidelined.

"A good mix of stakeholders is crucial to any process that aims for change, but it is also one of the most difficult steps. Again, the leading change maker sets the agenda and greatly influences the potential for initiating change," Hebinck concludes.

The study draws on four case studies in which participatory foresight has been used to conceptualize and strengthen strategies and policies for food systems change. The cases are drawn from collaborative efforts between the CGIAR’s Climate Change, Agriculture and Food Security program, under which scenario-guided policy formulation is conducted in Africa, Asia, and Latin America, and the EU funded FP7 project TRANSMANGO, which focuses on scenario-guided transformation pathways for European food futures. The four cases share some methodological principles. In each case, future scenarios were used to either review and improve existing plans (draft policies), or new plans and strategies were in fact created in the same process, through visioning and back-casting (Vervoort et al. 2014, Vervoort and Gupta 2018). The cases are different in terms of governance and social conditions for transformative change. Perhaps most significant is the status of each project in relation to existing processes of public governance: ranging from entirely integrated with existing government food policy to hybrid multistakeholder processes, to being largely disconnected from government policies.