Humankind alters rivers, transform the landscape and even moves mountains when needed. While these changes are intended to benefit humans – easier access to fresh water, more agricultural land, minerals from mining – the long-term impacts of these changes are too often overlooked.

One of the most productive wetlands in the world, Colombia’s Ciénaga Grande de Santa Marta (CGSM), is no stranger to these types of changes. The 1280-km2 estuarine wetland is part of Colombia’s longest river, Magdalena River, and has seen the extensive construction of roads and artificial channels over the past decades. These have not only changed the water flow to the wetlands, but have also impacted the region’s mangroves.

To understand the extent to which CGSM’s water ways have been impacted, centre researcher Fernando Jaramillo and colleagues assessed changes in the area from 2007-2011 using a remote sensing technique called Wetland Interferometric Synthetic Aperture Radar (InSAR), in addition to a hydrological study of the river’s water discharge.

The CGSM in Colombia presents an iconic case of alteration in wetland connectivity…. Over the last six decades, the wetland has experienced extended hydrologic modification through the construction of roads, artificial channels, and water flow regulation that has increased the regions vulnerability to dry events from the El Niño-Southern Oscillation

Human-driven alterations, in combination with climate change, are a massive threat to wetlands worldwide. In coastal wetlands and estuaries, these changes have been particularly troublesome as mangrove ecosystems are often also impacted. Together, wetland and mangrove ecosystems not only provide habitat for many animals, plants and crops, they also reduce water pollution and provide erosion protection and safeguard against floods for human’s sake too.

Jaramillo explains, "The CGSM in Colombia presents an iconic case of alteration in wetland connectivity…. Over the last six decades, the wetland has experienced extended hydrologic modification through the construction of roads, artificial channels, and water flow regulation that has increased the regions vulnerability to dry event from the El Niño-Southern Oscillation." Jaramillo argues that these changes have also contributed to massive mangrove diebacks, as a result of increased salinity in the region. 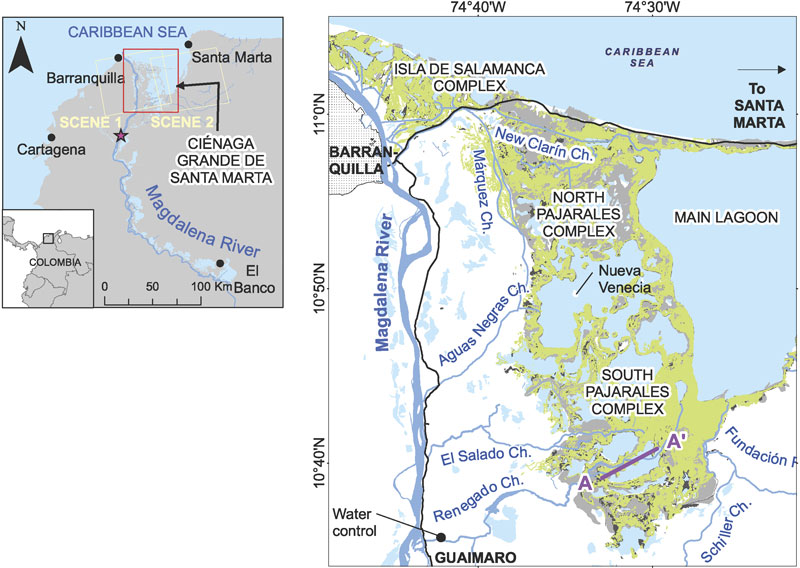 The Ciénaga Grande de Santa Marta wetland (CGSM). Picture to the left shows location of the CGSM on the Colombian Caribbean Coast and specific location of the Calamar discharge station on the Magdalena River (star). Picture to the right zoom of the CGSM along with main channels of fresh water input from the Magdalena River (blue), and the two main roads (black) interrupting the flow of water between CGSM, river and sea. The road between Barranquilla and Santa Marta was initially constructed in the 1950's without adequate drainage systems, leading to the hydrologic isolation of the CGSM from the sea. The secondary road from Barranquilla to Guaimaro was constructed in the 1970's, restricting fresh water inputs from the Magdalena River. The Renegado channel is controlled at its mouth by a sluice gate for agricultural purposes. Mangrove coverage in 2016 is shown in green with dead mangrove areas that have not recovered to date represented in grey.

Channels constructed in the CGSM area are supposed to allow for fresh water from the Magdalena River and increase hydrological connectivity within the wetland. The results show that some of the channels route freshwater into the CGSM wetland, which has helped reduce the salinity in some areas. The channels, however, have complicated the connectivity of the area, with possible local impacts on mangrove ecosystems. Channels that were built to increase wetland hydrological connectivity have actually had the opposite effect. Sediment build up in some of the channels has blocked freshwater from the Magdalena River, and as a consequence, increased pore and surface water salinity in the wetland. In turn, this affects the ability of mangrove species to thrive.

The case study of the CGSM wetland highlights that even when landscape changes are taken into consideration, results can still be surprising. In this case, even though channels were created to allow for water flow from one side of the road to the other. However, sediment build-up and seasonal changes influence the wetland hydrological connectivity.

To restore the CGSM wetlands, the authors suggest:
(1) Restrictions to the regulation of incoming freshwater
(2) Avoid isolating neighbouring mangroves along the channels within the wetland

The remote sensing technique applied was Wetland Interferomaetric Syntehetic Aperture Radar (InSAR), which creates maps, called ‘interferograms,’ that display changes in solid surface overtime. This technique allowed the authors to create 66 interferograms that visualized the movement of water in the wetlands from 2007 to 2011, in both the wet and dry season.

The hydrologic study was used to measure changes in water levels across time and space. In time, the authors measured the differences between the wet and dry season, as well as over the years. In space, the authors selected hypothetical areas in CGSM, and measured the water level changes at those points. 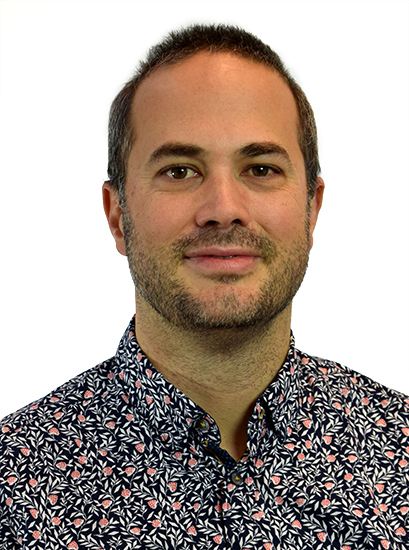 Fernando Jaramillo is a researcher in the planetary boundary team specializing in hydroclimatic change, human impact on the water cycle and freshwater consumption. He also focuses on the climatic and anthropogenic impacts on the hydrology of wetlands