A recently published review in Trends in Ecology & Evolution uses ideas from resilience theory to clarify thinking about collapse. The paper reviews the study of collapse across economics, archeology, and ecology and then suggests a new framework for studying collapse in social-ecological systems. Photo: Destruction by Thomas Cole/Wikimedia

Fear of collapse lurks behind many discussions about the future, but much research on it is scattered and incoherent

In October 2017 many were alarmed when researchers reported an apparent collapse in insect populations in Germany. The researchers found that the biomass of flying insects in protected areas had fallen a remarkable 77% over the past nearly three decades. They warned of an ‘ecological Armageddon’. “If we lose the insects then everything is going to collapse,” they said.

‘Collapse’ is an evocative word. It conjures dark images failure, disorder, and loss, and it implies that something has fallen into disorder. The word collapse is frequently used in discussions about sustainability, usually in terms of risks of collapse and the need to avoid collapse. However, developing an understanding of factors that actually cause or predict collapse has been limited by inconsistent and unclear definitions of collapse.

Understanding collapse requires the comparing different cases of collapse, however when collapse is defined inconsistently and unclearly, such comparisons are impossible, and block the development and testing of different theories of collapse.

Collapse is the shadow of resilience, consequently studying collapse is indirectly the study of what makes a system resilient

Defining collapse, requires specifying the identity of the system being studied, as this can be used determine its elements, characteristics and thresholds of change. Once the system has been identified, the authors argue that its collapse can be determined using four criteria:

The first criterion is that the identity of the system must be lost. This can occur if important components of the system disappear.

Many paths to collapse?

As Peterson explains, “Collapse is the shadow of resilience, consequently studying collapse is indirectly the study of what makes a system resilient.”

Trade-offs between the resilience of one part of a system and the fragility of another may be unavoidable, but knowing how and where a system is fragile gives people advanced warning as well as the capacity to work to reduce the risk of failure in that part of the system. As the world changes and new disruptions of current social-ecological systems occur, a science of collapse is needed to create a resilient and sustainable future. 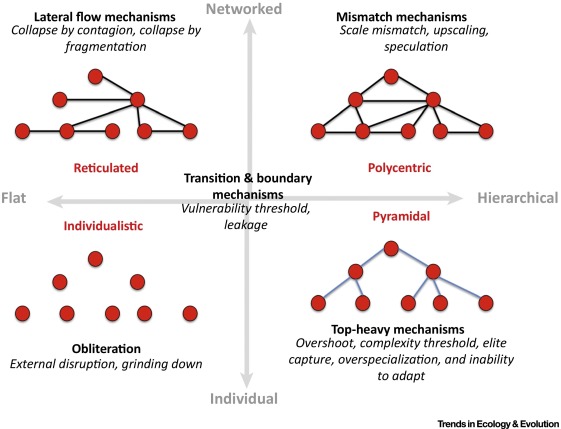 An illustrative example linking system structure with the collapse mechanisms which are likely to lead to system collapse. Detailed explanations of the mechanisms are provided in the article. Click on illustration to access the article.

Cumming and Peterson use a review of 17 case studies of social-ecological system collapse to propose a systematic approach to defining system collapse. Further to this, the authors propose a framework for collapse research that allows for comparison between case studies and the development of a general theory of collapse and its mechanisms in social-ecological systems. Drawing on previous work regarding system structure by the first author, the framework is shown to be able to link specific collapse mechanisms with the pre-collapse structure of the system. The authors proceed to discuss the benefits of a systematic approach to collapse research to the theory and practice of system management.