A review published in Ecology and Society counters criticism on resilience for being blind to power structures and assuming "we all sit in the same boat". Photo: N. Hällström

Who’s got the power?

Contrary to critics, resilience research is not blind to power structures or conflicts

• This review clearly shows that power, conflicts and intentional agents are not neglected in the SES literature although notions of desirability are often vague

Research on resilience in social-ecological systems (SES) is sometimes criticized for assuming that adaptations and transformations are harmonious consensus-building processes. Furthermore, it is criticised for being stuck in ecological thinking, which tends to exclude analysis of power, conflicts and intentional agents. These assertions have now been tested in a literature review published in the journal Ecology and Society.

Together with his co-author, Björn Nykvist from the centre and Stockholm Environment Institute, Hahn analysed almost two hundred research papers on resilience of social–ecological systems. In particular, they focused on the concept of adaptability and decided to test three hypotheses:

1. The literature on resilience of SES treats adaptability as a capacity of a system to self-organize in an autonomous way, i.e., with no description of actors with intentions and strategies;
2. The literature on resilience of SES makes normative judgements concerning what are “desirable” adaptations; and
3. Power issues and transformations are increasingly being addressed in the SES literature.

For various reasons, some social scientists have criticised research on resilience and social-ecological systems for being blind to power structures and assuming "we all sit in the same boat". In this paper we show that such generalisation is not correct, the reality is much more diverse

Hahn and Nykvist analysed 183 papers in 62 journals and found no evidence for hypothesis one above: one-third of the papers treated adaptability as intentional processes driven by stakeholders.

“Social learning and networking are often emphasised as strategies for changing power structures and achieving sustainability transformations in the literature on resilience and social-ecological systems,” the authors write.

When it comes to hypothesis two, the authors found that two-thirds of the assessed papers used adaptability in an explicitly or “vaguely normative” way. The remaining 33% of the papers, on the other hand, clearly showed that it is indeed possible to make a descriptive analysis of adaptability, just as democracy and other concepts with normative connotations can be analysed in this way.

Following this reasoning, Hahn and Nykvist suggest that adaptability could be defined as “the capacity of actors to change ecosystem management and thereby avoid what they regard as undesirable regime shifts”.

Words like ‘desirable’ should either be avoided or be conditional on the identification of an explicit normative framework like the Sustainable Development Goals or specific actors, they conclude.

To test hypothesis three, Hahn and Nykvist analysed a larger number of papers from the SES resilience literature, published between 2001 and 2015. Out of these 798 papers, 44 (less than 6%) mentioned “power” in the title, abstract, or key words, whereas 198 papers (roughly 25%) mentioned “transform.”

“It is clear that transformation and power issues are increasingly being addressed in SES literature, at least in absolute terms,” they write. 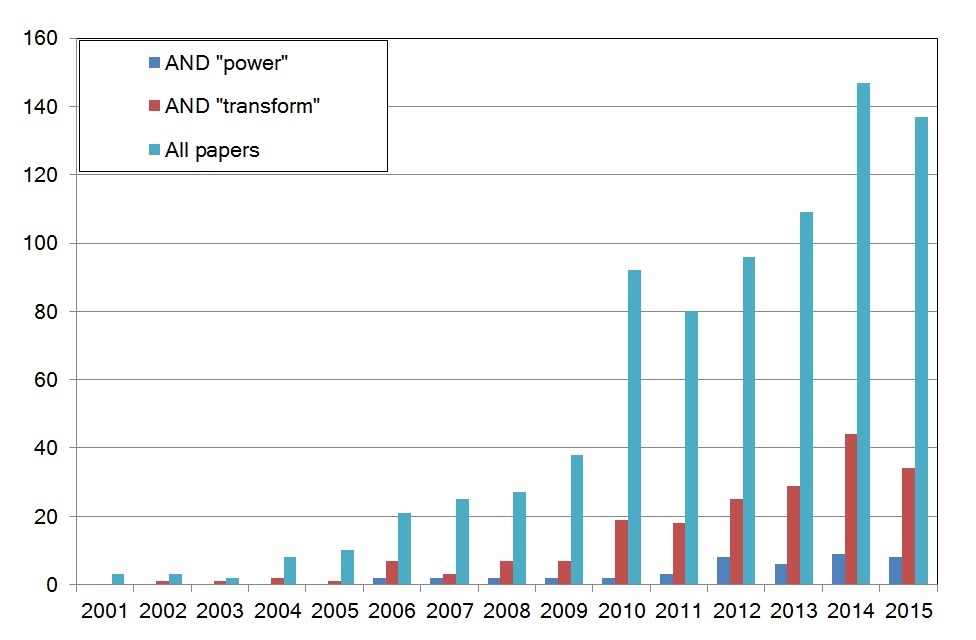 Total number of papers and number of papers that also mention power and transformation, respectively. Source: Hahn, T., and B. Nykvist. 2017. Are adaptations self-organized, autonomous, and harmonious? Assessing the social–ecological resilience literature. Ecology and Society 22(1):12

Hahn and Nykvist conclude that the constructive debate needs to continue “to advance science and provide adequate policy support for sustainability transformations”.

Along these lines, their analysis of the literature clearly indicates that the sometimes heated debate between social sciences and SES research has resulted in constructive pathways for dealing with questions of adaptation and adaptability, drawing on core concepts and insights “from both sides.”

The SES literature originates from ecological ontologies and epistemologies which allow analysis of anticipated vulnerabilities (tipping points) and complex adaptive systems thinking. However, a sloppy use of what is “socially desirable” has sometimes been interpreted as an assumption that adaptations are harmonious consensus-building processes. However, this is incorrect, says Hahn.

“Our analysis suggests that the papers often assume conflicts and analyse how multi-actor networks are developed to change status quo.”

For SES to become a truly interdisciplinary research field that enhances understanding of the coevolution of intertwined social and ecological systems, transformability can for example be defined as “the capacity to break path dependency and shift toward a new development trajectory justified by a fundamentally different narrative.”

Hahn and Nykvist used a structured literature review (an approach common to both social science and natural science) to analyse the period 2011–2012, a time when the strongest critiques of SES resilience were being published. They used the ISI Web of Science database and searched for articles matching (“social–ecological system*” OR “socio-ecological system*” AND resilience AND adapt*) in title, abstract, and keywords. For the third research question, they made a quantitative assessment of all 798 papers on resilience, adaptability, and SES published 2001–2015, adding either the words “power” and “transform” to the search. Adaptations were considered autonomous if they are framed only as self-organized or react according to modelled preferences, e.g., in agent-based models. Adaptations were considered intentional if they are described as strategically planned or organized by “real” actors.