Using the method "photovoice" centre PhD student Vanessa Masterson has looked for the meaning of sense of place and the landscape of home on the Wild Coast in South Africa. Photo: Lungani Sikade

How many words does a picture really say?

Nigerian author Chimamanda Ngozi Adichie says in one of her TED talks:

”Stories matter. Many stories matter. Stories have been used to dispossess and to malign, but stories can also be used to empower and to humanize. /…/ when we reject the single story, when we realize that there is never a single story about any place, we regain a kind of paradise.”

When Vanessa Masterson was conducting a pilot study in the early days of her PhD studies at the centre she learned about a Xhosa word that was to send her on a journey for the next five years.

In isiXhosa, the language of the amaXhosa people in South Africa, the word ikhaya refers to house or home, but when a prefix is added, emakhaya refers to a place, to ‘the landscape of home’ and is imbued with meaning.

“From the way people talked about emakhaya it seemed that the word represented a much deeper meaning and connection to a place and way of life,” says Masterson.

“Emakhaya seemed to represent and hold important parts of identity and belonging, a connection to who you are but also to something bigger than you.”

A research participant describes: “Emakhaya is your own place where you belong. You are possessive about it. When I am away from it, I know that I belong there. I must go back there because it's where I was born. It's where my roots are. I belong to it. Even if I die in the city, my corpse will be taken back to where I belong.“

Masterson’s thesis work has since explored this notion, translated in her research to sense of place and culture, and she has looked at how people relate to the landscapes they live in.

Her fieldwork has mainly been carried out in the former Transkei homeland on the Wild Coast in South Africa. This is a region where poverty and lack of infrastructure and employment are imminent challenges, currently (and historically) driving many people to move to bigger cities to look for jobs.

“There’s an assumption that development here will happen along a traditional western urbanization pathway. But even as they leave for the city, people are maintaining strong ties to these community lands,” Masterson explains.

“I wanted to understand what that means in terms of identifying pathways for sustainable development.”

The study was conducted in three Xhosa villages in the Eastern Cape Province. This region has witnessed the long-term decline of small-holder agriculture and diminishing employment opportunities. Participants were asked to take photos that represent their understanding of and relationship to this landscape. Photo: Mziyanda Hermans

Making people the storytellers
To find answers to her questions Masterson realized that what she needed was to listen to people’s stories, and she set out to find a method that would allow her to do so in the best way she could think of.

Knowing there are cultural and language barriers, she wanted to somehow be able to tap into the local perspective to understand how sense of place mediates social-ecological change. In the case of the former Transkei homelands these changes include agricultural decline and changes in livelihoods.

“As a white woman from the city carrying out research in isolated villages in the former Transkei homeland and the townships of Cape Town I was aware that I would sometimes be met with suspicion and seen as an outsider. This awareness greatly impacted my choice of methods. Using images produced by participants as a shared reference point was a catalyst for lively discussion and communication across language barriers.” /Vanessa Masterson (on the right). Photo: G. Masterson

There are also broader socio-political changes in the country that impact people’s outlook on a larger scale and where this kind of understanding could be valuable, Masterson believes.

She landed on “photovoice”: a method where the participants take photos of places and situations that are meaningful in their lives. They then narrate and caption the photos. This becomes a powerful way for the participants to convey their diverse opinions, knowledge and experiences. 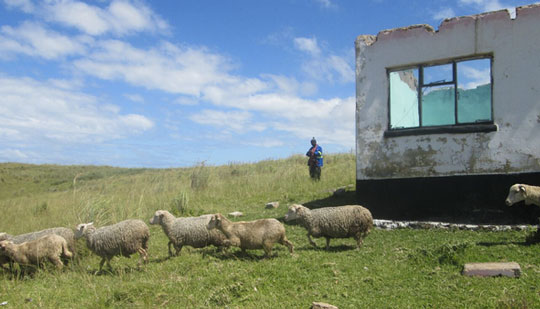 ”With this photo I want to portray the type of grazing land we have - it’s spacious, lush and green. There sheep are also important. You don’t have to sell the sheep, but you can get some money from their wool.” Photo and caption: Lungani Sikade

Using the photos that the participants themselves had taken also impacted on who felt able to participate in the discussion. Masterson explains:

“Especially young girls have cultural expectations upon them to be modest and not assume dominant positions in a group. Using their own photos as talking point however, gave them confidence to make their voice heard and take on the role of experts in their own context.” 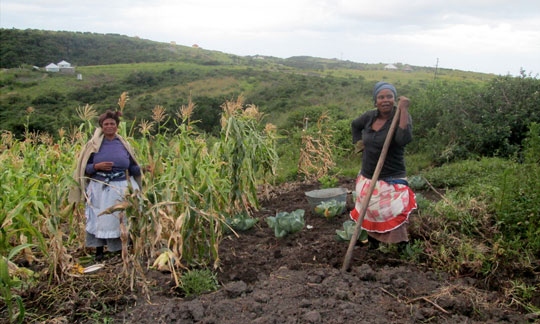 ”This picture shows how farming is important to us, and the big pieces of land we have. Here there are vegetables and also maize planted. We don’t go buy everything from the shop. If you need vegetables or maize, you harvest them from the garden. I love this because it shows that we can do things on our own and do not rely on buying everything. This picture says that the amaXhosa people always do things that they want to. We believe in doing things ourselves.” Photo and caption: Zintle Menzeleleli

Finding pathways for sustainability
A key challenge of development in the context of the many social and ecological changes we face today is to understand how cultural and cognitive factors influence sustainability.

Cultural practices, traditions and norms can impact how a community reacts and acts in the face of, for example, changing ecosystems. This in turn has implications for building resilience and interventions for poverty alleviation and improved livelihoods.

“We study sustainability science and work for better resource management so that the systems that are supporting people can continue to do so, or even do it better than they are now. Research has often taken the view of an outside observer, but who better to say what a particular system than the people who live there and are directly affected,” Masterson says. 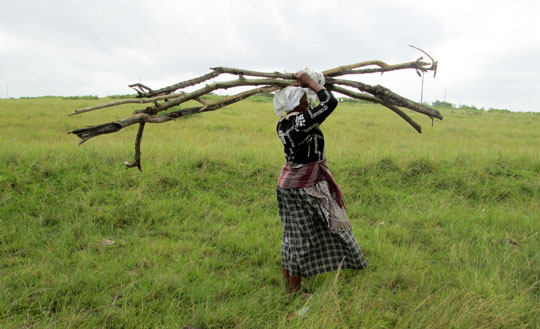 ”This is our way of living. You have to go to the forest and come back with a head bundle of firewood to use at home. This woman is suffering. I do not like this. At the same time it makes me happy because it shows she is healthy. If she was not healthy, she would nog collect firewood. There are times when you will feel happy in the forest - when it’s very hot and you enjoy the shade of the trees, and rest there. But to be alone in the forest is not safe.” Photo and caption: Nomfundo Zibonele

Over the course of two months Masterson facilitated workshops with 19 participants who took hundreds of photos. The participants each took photos on different themes and then chose what photos were most important to tell their stories. These photos were then discussed in the group. This way the meaning of different things and places was expressed, and issues in the community could also be identified. 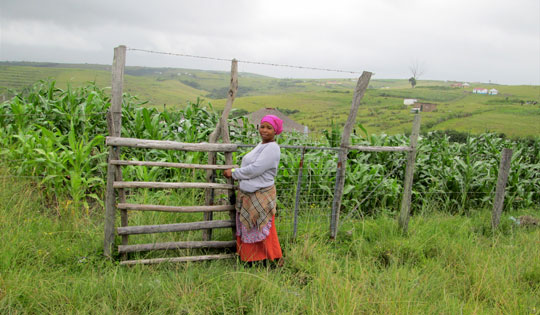 Nurturing the sources of wellbeing
The UN:s Sustainable Development Goals come with the explicit message that we now need to redefine development – all countries are in a sense developing countries if we are to reach these goals. There is no blueprint for sustainable development, as no one has yet achieved it and each place is unique.

“From the way people talk about emakhaya it is clear that it has great significance to them, and that it provides them with a sort of alternative source of wellbeing. The kind of subjective wellbeing that is maybe sometimes difficult to pinpoint and therefore might be neglected in decision making,” says Masterson. 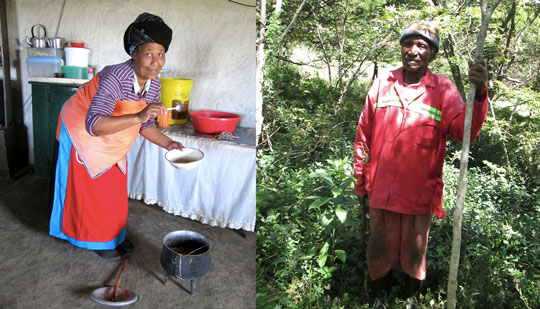 Left: ”In the city, I wouldn’t feel happy. I wouldn’t feel right, I would feel restricted in the kitchen in the city, missing the three-legged pots.” Photo and caption: Nontsapo Soga
Right: ”This picture is a grandfather who is in the forest to find some amazeya (traditional medicines). Here at emakhaya we have our ways of doing things without involving money. If you have the flu you go to the forest and get some herbs. You don’t necessarily go to the city for that.” Photo and caption: Mlungiseleli Bili

Masterson believes that this kind of research can hopefully have an impact in this.

“Bringing these things to the surface hopefully means that they can be better accounted for on larger scales in society. I think what we need is to find ways to develop, out of poverty and out of unsustainable ways of living, while maintaining values and meanings of nature that we draw on for our wellbeing.,” she says.

Vanessa Masterson will be defending her PhD thesis, entitled “Sense of place and culture in the landscape of home: Understanding social-ecological dynamics on the Wild Coast, South Africa” on 8 December at 9.30 in Vivi Täckholmssalen on Stockholm University main campus. 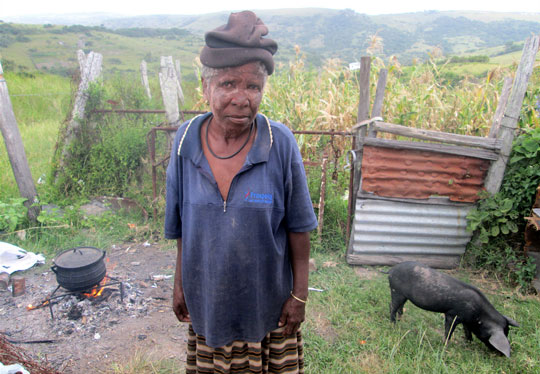 ”This is my neighbour. She makes me happy. She calls me 'gxa wam’: my pal, my friend. I just want to show that we are also among oomama, old women. I am happy about this because they give us advice about married life.” Photo and caption: Nontsapo Soga

Vanessa Masterson is a PhD student at the centre. Her thesis focuses on understanding aspects of stewardship of ecosystem services (such as local knowledge, institutions and bio-cultural diversity) in the Eastern Cape, South Africa.