Project member Laura Perreira explains the basics of the Seeds of Good Anthropocenes project and how to get involved.

Seeds of a good Anthropocene

It is easier to criticize than to act. While there is no shortage of stories that document human inequality and unsustainable stewardship of our planet, efforts to envision what better futures could actually look like seldom receive the same attention.

To counter this, Centre researchers Garry Peterson, Reinette 'Oonsie' Biggs and Albert Norström have, together with a broad international team of researchers, initiated an international scientific experiment gathering examples of a thriving sustainable social-ecological future.

Counterbalance dystopic visions
The examples are collected and presented on a website called Seeds of a good Anthropocene.

The title refers to the new geological epoch called the Anthropocene, which recognizes that humans are profoundly altering the functioning of the Earth's ecosystems.

Garry Peterson explains that the website will collect projects, technologies, and initiatives that could grow, combine, or adapt to create a better world.

"Most visions of the future are extrapolations of the world of today, and do not capture the changes needed to create an ecologically sustainable, fair, and prosperous world," he says.

"We know that the future will contain and grow out of many elements that already exist, and we want to identify parts of the present in which people and nature are supporting one another. We call these seeds"

Oonsie Biggs, member of the Seeds of a Good Anthropocene project

Albert Noström continues: "Identifying potential seeds of a Good Anthropocene, and understanding how and why they occur, can help us envision how people might grow, combine or use these seeds to and allows people and nature to thrive rather than a dystopia we want to avoid."

Diverse perspectives
The researchers want to collect seeds from a diversity of disciplines, worldviews, values, and regions in order to capture the variety of innovations and problems that people face.

Oonsie Biggs says: "We have already received many examples from scientists, but we want to capture innovations in transport, energy, communications, as well as the rediscovery of traditional knowledge, social innovations, and new approaches to regenerating ecosystems. More examples will help map the diversity of seeds that people identify, and help us develop methods and scenarios that are more diverse visions of the future."

You can submit your 'seed' on their website using a short questionnaire that requires no more than 5-15 min to complete. 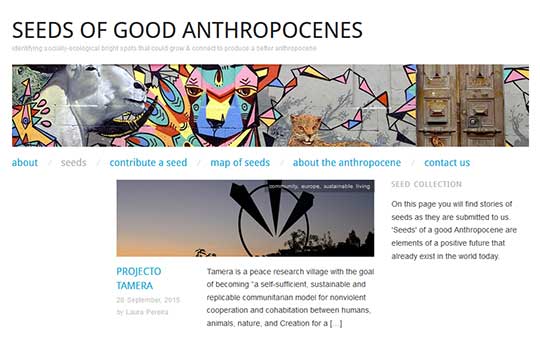 Garry Peterson uses complex systems theory, spatial analysis, and the synthesis of social and ecological data, to develop theory and practical understanding that people can use to better manage the ecosystems they live within.

Reinette (Oonsie) Biggs focuses on regime shifts — large, abrupt, long-lasting changes in the dynamics of coupled social-ecological systems that can have dramatic impacts on human economies and societies.

Albert Norström is Executive Director of the Programme on Ecosystem Change and Society (PECS). PECS aims to integrate research on the stewardship of social–ecological systems, the services they generate, and the relationships among natural capital, human wellbeing, livelihoods, inequality and poverty.