Recent study presents important advances that have been made in social-ecological research and identifies four key priorities for the future. Photo: J. Lokrantz/Azote

A social-ecological lens for the future

How research can catch up with rapid environmental change

This has led to an increasing focus within science, policy and practice on humanity’s dependence on nature, our immense influence on it and the ethical responsibilities that come with it.

In a recent study from Current Opinion in Environmental Sciences, Centre researchers Oonsie Biggs, Tim Daw, Carl Folke, Megan Meacham, Albert Norström, Garry Peterson and Cibele Queiroz together with colleagues from the Programme on Ecosystem Change and Society (PECS) discuss the advances that have been made and identify priorities for moving ahead.

"There are four priorities needed to speed up the advances we are making, in order to stay ahead of significant sustainability challenges"

Increased understanding
The authors point out four important ways in which the social-ecological systems approach has begun to shift research and practice only in the past two decades:

Firstly, the understanding that humanity is fundamentally dependant on nature is no longer a niched scientific acknowledgement but a widely recognised understanding.

Secondly, the need for solutions to sustainability challenges has increased the communication and collaboration across disciplines and between science and society.

What lies ahead
To speed up and add to these advances the authors push for a change in research approaches and better engagement between science and society.

They identify four interlinked priorities for researchers and decision makers:

Firstly, there needs to be an improved understanding of "teleconnections" – the social-ecological interactions between regions – and develop institution to govern them. Though regionally focused research is often useful, regions cannot be treated as completely separate units - what happens in one place can significantly affect another. For example the regrowth of forest in one region can lead to unsustainable land-use developments somewhere else.

Secondly there is a need for researchers and policymakers to pay more attention to the long-term drivers of change that gradually reshape social-ecological systems. Slow drivers that are maintained or not hampered with can eventually push a system towards a dramatic change. Though they can be difficult to study, more efforts are needed to better understand the slow processes that have major impact on social-ecological systems, be it changing cultures and norms or the slow eutrophication of a lake.

Thirdly, the interactions between power relations, equity, justice and ecosystem services need to be better understood. This involves addressing major global injustices, connected to who benefits from ecosystems and who controls them.

Finally, an even stronger interface between science and society must be encouraged Addressing sustainability issues requires effective policies, practices and knowledge that are developed in a socially acceptable way. This in turn requires researchers, policymakers, practitioners and citizens to collaborate.

"The increased interest in and recognition of social-ecological linkages is a promising development, however the risk is still that the growing challenges of the Anthropocene will outpace the progress that has been made in the field," says Albert Norström, Centre researcher and executive director of PECS.

"To avoid this we need to keep pushing the social-ecological research forward, and we argue these four priorities should be pursued," he concludes. 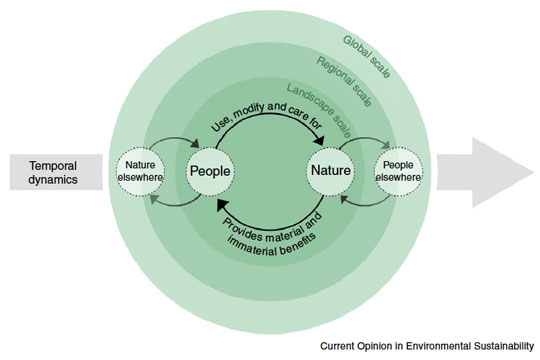 Social-ecological systems are interdependent and linked systems of people and nature, connected across scales. This reflects that people are part of ecosystems and shape them, from local to global scales, and are at the same time fundamentally dependent on the capacity of these systems to provide services for human wellbeing and societal development.

Albert Norström is Executive Director of the Programme on Ecosystem Change and Society (PECS), which has its International Programme Office hosted by the Stockholm Resilience Centre. He is also a researcher in the Governance of coastal and marine systems Theme.