A new study shows that despite fish stock recovery, the potential permanent changes to the Baltic Sea ecosystem will have extensive socio-economic costs. Photo: M. Almqvist/Azote

Look beyond the cod

Let us start with the good news. Overfished predatory fish populations such as the Baltic cod are showing signs of recovery and has increased steadily since 2005. The bad news is that a complete recovery is near impossible. This is because the ecosystem in which the cod thrives has changed after years of degradation. And the cost of this is significant.

In a new article published in the Proceedings of the Royal Society, centre researcher Thorsten Blenckner and colleagues from Spain, Germany, Denmark and Norway look at the socio-economic consequences of less cod in the Baltic Sea.

The study is relevant to managers and policy makers because it provides a new perspective to the bio-economics of the Baltic Sea.

Their approach is unique because it focuses more on the state of the entire ecosystem rather than the cod’s specific recovery.

"Management of depleted fish stocks has traditionally been treated as a single species concern, primarily related to the level of exploitation. But understanding the dynamics of commercially exploited fish stocks in an ecosystem context, provide a completely different perspective"

Permanent change
Blenckner argues that a more holistic ecosystem approach is necessary to evaluate the chances of restoration of a fish stock.

"Even if a fish population recovers after a perturbation, the configuration and dynamics of the ecosystem as a whole has been altered. Put differently, a population may recover, but changes to the entire ecosystem may be more permanent," he says.

In their study, Blenckner and his colleagues present a statistical food-web model based on historical records over the last three decades. The data was used to assess whether ecosystems regenerate or not under varying fishing pressure.

The fishing pressure was in turn assessed in combination with changes in water temperature and salinity. Specifically, they looked at how the ecosystem changed under two contrasting temperature and salinity conditions, those found before 1989 (which were favourable for cod), and those after, when the ecosystem had changed unfavourably for the cod.

Considerable profit drop
The biological output was then compared to economic expectations. This allowed Blenckner and his colleagues to translate the ecological regeneration potential into societal costs.

While the economically optimal exploitation levels differed only slightly between the two different conditions, the annual profit was considerably lower for the second, dropping from 230 million euros to 140. This is because total economic costs also have to include societal costs, particularly losses in consumer surplus which amounts to approximately 30 percent of fishing profits under optimal exploitation.

"Overall, the financial effects of changes in the ecosystem are estimated to cause a total annual loss of approximately 120 million euros. These results indicate that the economic baseline not only changes with the ecological baseline but that current conditions no longer support the same fishing pressure as in the past," Blenckner says.

In summary, the study shows that the regeneration of an ecosystem to an economic target is not straightforward, as there are multiple interacting drivers involved that need to be considered and understood.

"It is important that future policies embrace this evidence in order to maintain our ecosystems not only healthy, but also financially sustainable," Thorsten Blenckner concludes. 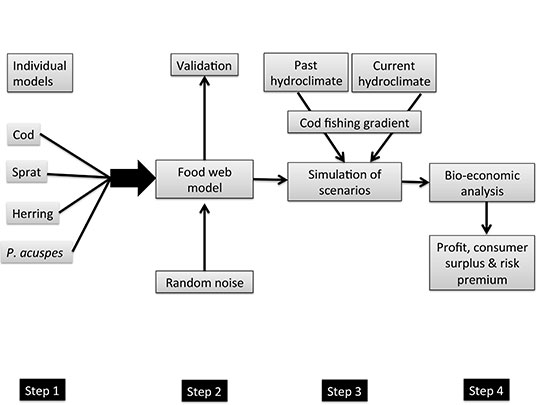 Study design to test for ecosystem regeneration pathways. The schematic describes the four steps used in the study.

Thorsten Blenckner has a strong interest in whole ecosystem processes and multiple stressors, the complexity of for example the Baltic Sea ecosystem (eutrophication, overfishing, organic pollution and impacts of climatic change) appear as a fascinating research field.